Elections to fill three seats on the openSUSE Board are set to begin in the coming weeks and candidates are needed to fill these three positions.

Candidates elected to the position will serve a 24-month term. The terms of Gertjan Lettink, Bryan Lunduke and Tomas Chvatal will expire and this is a great opportunity for any member who is interested in helping the project from a seat like this to run and be elected

Members of the openSUSE board help to influence the future direction of the project. Members are encouraged to learn the election process, run for the board or propose a candidate.

END_OF_DOCUMENT_TOKEN_TO_BE_REPLACED

What Is New With KDE’s Plasma 5.12 in openSUSE Leap

KDE Plasma 5.8 users coming from openSUSE Leap 42.3 to Plasma 5.12 on Leap 15 will notice significant changes when upgrading to the new versions.

The boot up time for KDE’s new Long Term Support release is faster and there is more optimization.

There have been performance optimizations all over the KDE desktop. The file operations in Dolphin are much faster now than with older KDE Frameworks releases. Plasma 5.12 has lower memory requirements and there are several new features users will notice from Leap 42.3 and Plasma 5.8.

The notification system gained support for interactive previews, which allows users to quickly take screenshots and drag them into a chat window, an email composer or a web browser; that makes it convenient for the user to not have to leave an application that is being used.

Music lovers will enjoy the new Music Controls in the Lock Screen. The new Media Controls include Previous and Next track. Play and pause are also included and it shows the song title that is playing. The lock screen controls can be disabled for added privacy.

END_OF_DOCUMENT_TOKEN_TO_BE_REPLACED

openSUSE participates again in Google Summer of Code (GSoC), a program that awards stipends to university students who contribute to real-world open source projects during three months in summer.

With this article, I will provide my experience as a former GSoC student and mentor, give you more details about the program and try to encourage students to get involved in openSUSE development through GSoC.

Why open source and openSUSE?

First of all, you may wonder why you should want to get involved in open source development. Everybody has their own reasons, but for me there are three main ones:

Starting is always difficult, but you don’t have to do it alone! In openSUSE, you will always find people to help you, and with GSoC this is even easier. The best feature of the program is that you will always have at least one mentor (most likely two) who will lead you through it. In addition, you will work in a project used in the real world by many users and all your code will be released under an open source license, so everybody can access, use, study, change and share it. Last, you will receive a stipend between 2,400 and 6,600 dollars depending on the country.

At openSUSE, you can find projects written in Ruby on Rails, Perl, Ruby, HTML/JavaScript, C/C++ and much more. This year you can work during GSoC in some of the most central and biggest projects in openSUSE: Open Build Service, openQA and YaST. They will for sure be challenging projects to work in, but don’t get scared, as that means that you will learn a lot from it too. And remember that your mentors and other openSUSE contributors will be there to help you!

But we also have simpler projects such as Trollolo, where any computer science university student could get started with Ruby. The desire to learn is much more important than the previous experience and knowledge.

END_OF_DOCUMENT_TOKEN_TO_BE_REPLACED

Project Selected as Mentoring Organization for Google Summer of Code

Let the fun begin! This week it was announced that the openSUSE Project is one of the 212 mentoring organization for this year’s Google Summer of Code, which is an annual international program that awards stipends to university students to write code and learn about open source development during their summer break.

The openSUSE Project has participated in GSoC since 2006 and has helped more than 50 students get started with free software development.

As a mentoring organization, eligible students will have an opportunity between March 12 – 27 to submit a project proposal to the GSoC program site. The program is open to university students aged 18 or over.

The openSUSE website dedicated to GSoC offers nine projects that GSoC students can select from to use for their proposals. The topics focus on web development, quality assurance, packaging and user experience design. The technologies used in the project are Ruby on Rails, Perl, Ruby, Html/JavaScript and C/C++. END_OF_DOCUMENT_TOKEN_TO_BE_REPLACED

Visit Combined Booths at SCaLE 16X, Save $ With Promo Code 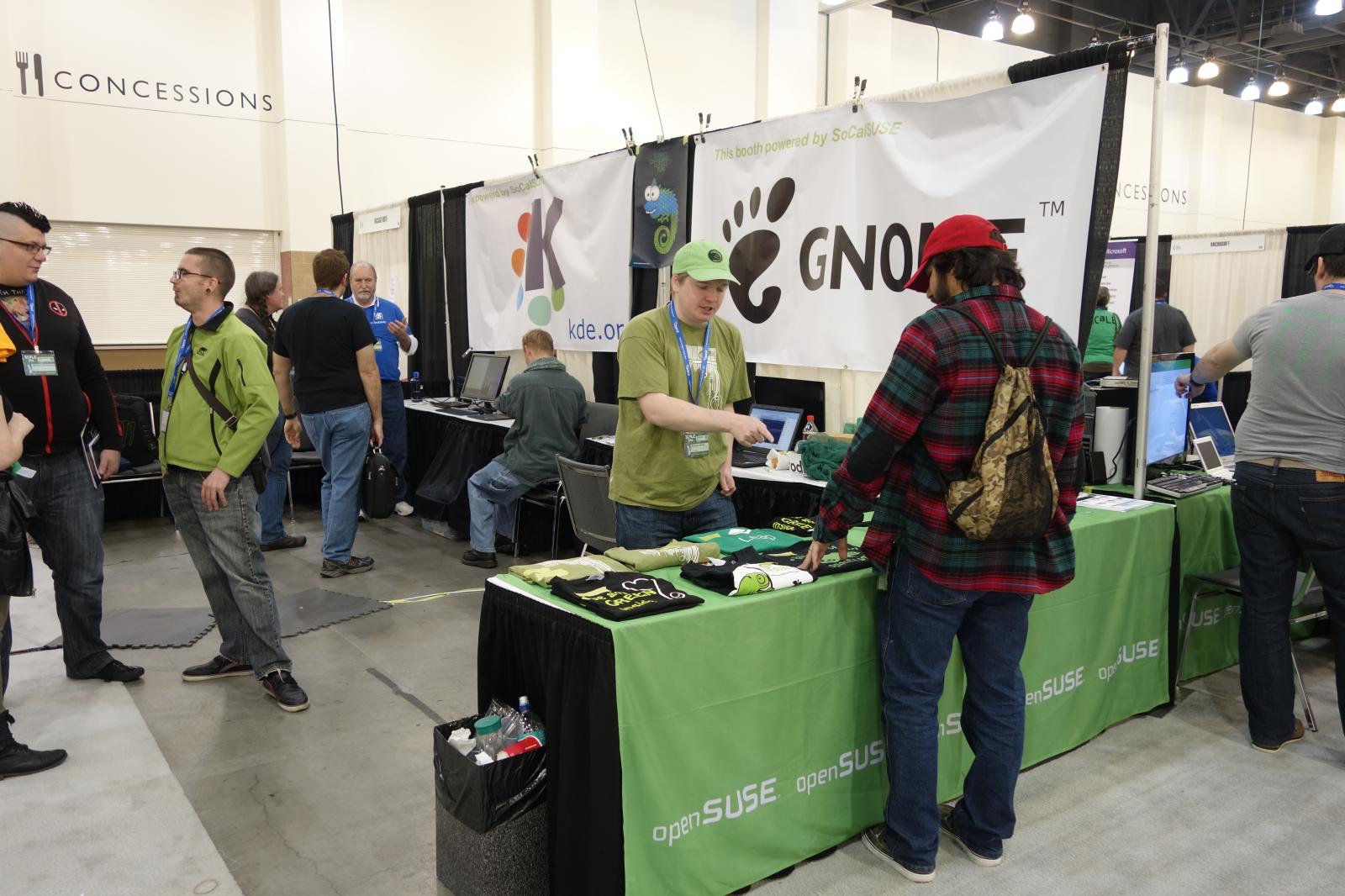 The 16th Southern California Linux Expo is about a month away, and openSUSE will once again have a booth with the KDE and GNOME booths.

The event takes place at the Pasadena Convention Center March 8 – 11.

Community members have been running the combined booths for several years and each year more people join the booth to pass along their knowledge and experience with each of the projects.

People who register between now and the event can get a 50 percent discount on their standard registration price using the promo codes SUSE, GNOME or KDE50.

We look forward to seeing you at SCaLE.

A key point in this new release is that Wayland support was extensively worked on and is now suitable as part of the Long Term Support guarantees. In particular, the Plasma session in Wayland now plays nicer with multiple screens, and has added support for screen rotation and touchscreen calibration. It also gained a new exclusive feature, Night Color, which removes blue light from the screen at night time in a similar fashion to Redshift, which only works in X11.

This means that the upcoming openSUSE Leap 15 will offer a far more complete Wayland experience installed by default. It will just be a matter of selecting “Plasma (Wayland)” in the session list of the display manager before logging in. Nothing will change for Tumbleweed users, which had already a Wayland session available since Plasma 5.4.

The Wayland session has already been tested by openQA as part of the Tumbleweed release process as was mentioned in a previous news post, but now this is also done for live media. So, if you want to test Wayland without touching your existing installation, why not give the live media a try?

As always, have a lot of fun!

KDE Plasma 5.12 transitioned from it beta version of 5.11.95 to the official release in an openSUSE Tumbleweed snapshot earlier this week.

On the same day of the upstream release, Tumbleweed snapshot 20180206 brought the new desktop software to its thousands of rolling release users. Improved performance and several new features are available in Plasma 5.12 like Wayland-only Night Color feature that allows adjustments to the screen color temperature to reduce eye strain and the System Activity and System Monitor display per-process graphs for the CPU usage. The new KDE Store offers a wide selection of addons that are ready to be installed. Plasma 5.12 is the second long-term support (LTS) release from the Plasma 5 team and will be the version used in openSUSE’s traditional distribution openSUSE Leap 15, which is expected to be released this spring.

Other notable packages updated in the 20180206 snapshot were compiler cache (ccache) 3.3.6, which improved instructions on how to get cache hits between different working directories. Translations were made for Indonesian, Danish and Catalan in updates of gfxboot from 4.5.26 to 4.5.29. Kernel module handling kmod 25 improved testsuite and allows mkosi to run testsuite in different Linux distributions. The Linux Kernel was updated to 4.15.1.

END_OF_DOCUMENT_TOKEN_TO_BE_REPLACED

Where to Stay, Getting Around Prague for oSC18 Prague is a beautiful city and you can bet that the city will be crowded during the openSUSE Conference. Hotels are already starting to fill up, so it’s best to take a look at the hotels we recommend now before all the hotels are booked out.

There are six hotels that are recommended, but feel free to book at other hotels in the city. The section for recommended lodging on the openSUSE Conference 2018 webpage gives options for hotels as low as 40 EUR a night to above 120 EUR. Each listing on the section gives a little info about the hotel.

Prague is a big city with excellent public transportation. With the exception of one hotel listed on the web page, which is the Vienna House Diplomat Prague, all other hotels are a few kilometers from the event location at the Faculty of Information Technologies of Czech Technical University in Prague.