One more year, Google Summer of Code (GSoC), a mentoring program in which openSUSE helps university students contribute to open source project, has come to an end. So, before 2018 ends as well and we start preparing for the new edition of GSoC, it is time to speak about all the great things that happened this year.

Let’s start by the most important part, our students’ work. Our successful students, Ankush Malik and Liana Xu, have spent 3 months hacking on openSUSE projects, during which they have written a lot of impressive code. But GSoC is much more than code, it is about learning, having fun and becoming part of the openSUSE community. Both Ankush and Liana claim that it has been an inspiring experience and are really thankful for the support they received from their mentors.

Ankush’s improvements in the Hackweek tool are noticeable. In his last weeks of work, he focused on giving all projects the chance to be viewed and on implementing a mailer. Check the last chapter of his GSoC journey: https://medium.com/@ankushmalik631/gsoc-wrap-up-86bba25bbb6d

Liana has been working on integrating Cloud Input in ibus-libpinyin and she has learnt ton about GNOME developer libraries and functions. Read about her project from her own words in her last blog post: https://liana.hillwoodhome.net/2018/08/13/about-programming-life-during-gsoc

It is also worthwhile mentioning the great collaboration which makes me particularly proud of the openSUSE community. Thanks to the help of contributors all around the world, the blog posts about GSoC were shared, republished and translated to languages like Japanese, Spanish and Indonesian. We also had the help of the openSUSE Indonesian community to design “Thank you” mugs to send to our mentors. Look how cute they are: 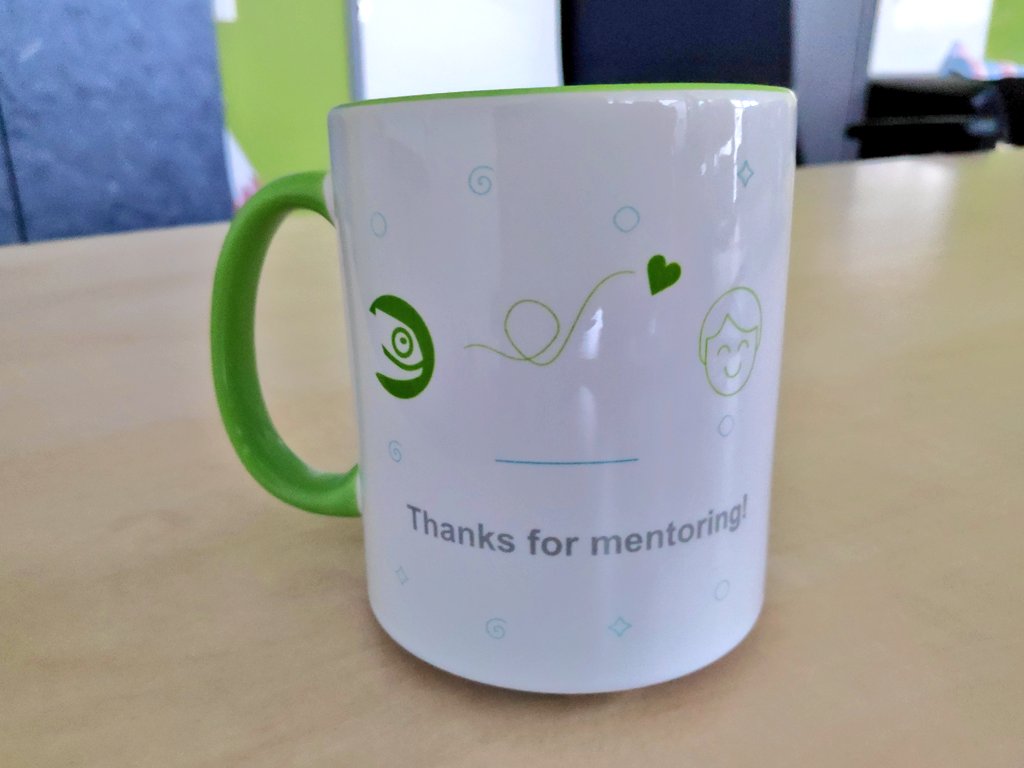 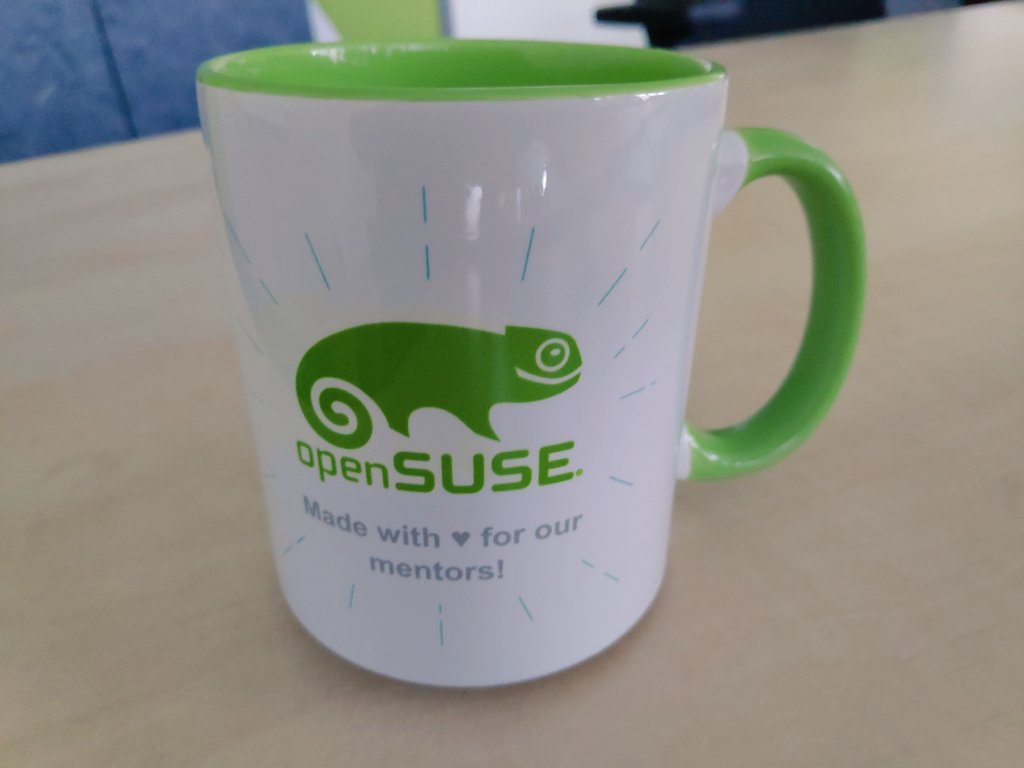 Last but not least, I would like to thank our passionate mentors and admins who took out time from their busy schedules to guide the students, our motivated students for their willingness to learn and good work, Douglas DeMaio who helped with shipping packages and organization, Google and specifically its open source team not only for the program itself but also for the well organized conference, SUSE for their support (especially economically), TSP which allows our students to attend the openSUSE conference every year, the blog post translators, Pramasta Ramadha and the rest of the designers who helped with the mugs design and everybody else who made this year GSoC amazing. Because of people like you, openSUSE is much more than just software.

Now let’s get ready for next year to keep helping new passionate students becoming part of openSUSE! Google has already announced Google Summer of Code 2019 and openSUSE is looking for mentors and organization admins who would like to help bringing new programmers to our community. We need at least one more organization admin and several openSUSE related projects to be able to participate. The application period for organizations is open from January 15 to February 6, so if you would like to participate as an organization admin please get in touch with Hernán, Christian or me by January 20. For mentors, the deadline to create an issue with your project(s) in the mentoring page is January 31. If you want more information about the program and what openSUSE has been doing, check out last blog posts, our mentoring page, Google’s Mentor Guide and the following video:

See you next year!

END_OF_DOCUMENT_TOKEN_TO_BE_REPLACED

The goal of the TSP is to help everybody in and around openSUSE to be able to attend the openSUSE Conference!

Requests for the TSP for this year’s openSUSE Conference have until April 12 to submit their request.

Remember: All requests will be managed through the TSP application at http://connect.opensuse.org/travel-support.

You will need an openSUSE Connect account in order to login to the application and apply for sponsorship. Please be sure to fulfill all of your personal details at openSUSE connect account to avoid delays or negative request. A good application with good information will be processed faster.

If you have any question regarding your trip to the conference do not hesitate to ask the TSP or oSC19 organizers.

We hope to see you there!

One of the growing community of openSUSE enthusiasts in Indonesia has contributed a poster he designed for the 2018-2019 Board Elections and Membership Drive.

Aris Winardi giving a presentation at the openSUSE Asia Summit 2016 in Yogyakarta, Indonesia

Aris Winardi, from Bogor, West Java, Indonesia, wants to inspire the openSUSE Community and Members to get involved in the Elections process and make it the best one yet.

The goal is to encourage all from the Community who are Contributors to the Project to apply for and get their openSUSE Membership, which will give them the right to vote in the upcoming elections and also some extra recognition of the work they do to keep the Project alive.

A developer by day, mostly working in JavaScript/Android/Flutter, Aris loves to help create artwork for open source communities. You can find him on Facebook at https://www.facebook.com/winardiaris and as twitter user @winardiaris.

Three of Six Board Seats to be Decided

There are currently three of the six seats up for election to the openSUSE Board, with no declared Candidates at this time, giving the opportunity to help guide the current and future path of the organization.

This year, the Elections Committee wants to exceed that record, and has announced an eight-week Membership Drive to coincide with the first five weeks of the Candidate Nomination phase, continuing through the three-week Campaign phase that follows.

openSUSE Users are Asked to Pitch In

With that in mind, the Elections Committee, along with the help of enthusiasts such as Aris, would like all openSUSE Users who appreciate the hard work and dedication that goes into the creation of such an awesome Operating System to prompt everyone they know who is contributing to apply for their Membership.

A healthy Membership leads to a healthy openSUSE Project.

How many contributors do you know?

Have you asked them if they are openSUSE Members?

Are you encouraging them to take out their Membership, if they are not, or are you suggesting they run as Candidates in the upcoming Board Elections, if they are Members?

That is a quick contribution you can easily make to openSUSE starting right now, so you can do your part to pay it forward.

The growing Asian Community, including the Indonesian region, is showing great enthusiasm for openSUSE and would like to encourage even more contributions and participation in the Project.

There are many ways to contribute, just check the Membership page for a quick list of some of the ways, and check out the contributor portal for more.

Posted in Announcements, Board, Board Elections, Events, Project | Comments Off on openSUSE Enthusiast Creates Board Elections Poster to Encourage Participation

2018-2019 Elections Underway with Calls for Candidates and New Members

Earlier this week, on Tuesday, Dec. 11, 2018, the Elections Committee posted the Schedule for the 2018-2019 openSUSE Board Elections, along with the announcement of a Membership Drive and a call for nominations and applications for Candidates to fill three vacant seats on the openSUSE Board.

The annual Board Elections are normally expected to run in November and December, with ballots cast and results published in time for the newly-elected Board Members to take their seats on the Board at the beginning of January. However, some additional work needed to be completed for this election, and the elections were delayed in part to accommodate the additional work.

A healthy Project requires a healthy and energetic Board, and that especially requires a healthy and energetic Membership composed of openSUSE Contributors, both to provide a slate of quality candidates and an enthusiastic group of engaged Contributors, to vote for candidates who best reflect their views for the future and the drive forward of the Project.

With that in mind, the current openSUSE Board — at the urging and with the full co-operation of the Elections Committee — clarified and updated the requirements for openSUSE Membership based on earlier engagements with the Community and a subsequent Board vote, as officially required under the Membership Rules, conducted at the annual Face to Face Board meeting earlier this year.

The changes to the rules are meant to ensure that all openSUSE Contributors have the opportunity to become a Member and to participate in the Guidance of the Project, as potential Board Candidates and as voters.

The Elections Committee would like to see the entire Community get behind this Membership Drive and participate in this Elections process.

Links for Board Candidate Nominations, applications for Candidacy, and applications for Community Membership, along with links to eligibility, can be found on the official 2018-2019 openSUSE Board Elections page at https://en.opensuse.org/openSUSE:Board_election

Posted in Announcements, Board, Board Elections, Events, Project | Comments Off on 2018-2019 Elections Underway with Calls for Candidates and New Members

openSUSE’s rolling release Tumbleweed had a total of five snapshots this week and is preparing for an update to the KDE Plasma 5.14.4 packages in forthcoming snapshots.

The five Tumbleweed snapshots this week brought the 5.19.5 Linux Kernel, which was the only package updated in the 20181130 snapshot. The kernel-source 4.19.5 package added a force option for the pciserial device for x86 architecture and fixed HiperSockets sniffer for s390 architecture.

The most recently released snapshot, 20181204, had more than a dozen packages updated. GNOME’s application for manage their Flickr image hosting accounts, frogr 1.5, fixed issues with the content and installation of the AppData file and moved the functionality menu. GNOME’s goffice had a version bump to 0.10.44. Various rubygem packages were updated and the most significant change was of the packages was that rubygem-pry 0.12.2 dropped support for Rubinius. Both python-boto3 1.9.57 and python-botocore 1.12.57 had multiple application programming interface (API) changes. The obs-service-set_version 0.5.11 package needed “python suff” and now allow running tests with python3.

The first snapshot to arrive in December was snapshot 20181203. Among the package changes were an update to checkmedia 4.1, which fixed digest calculation in tagmedia, GNOME’s framework for media discovery grilo 0.3.7, and distributed compiler icecream 1.2, which made load calculations better and also cleaned up the general code. A python-docutils build dependency was added with cifs-utils 6.8 and elfutils 0.175 fixed three Common Vulnerabilities and Exposures issues. Major changes came with the man 2.8.4 package. One of the changes relies on decompressors reading from their standard input rather than redundantly passing them the input file on their command line; this works better with downstream AppArmor confinement of decompressors. Virtualbox 5.2.22 fixed a regression in the Core Audio backend causing a hang when returning from host sleep when processing input buffers and webkit2gtk3 2.22.4 fixed serval crashes and rendering issues and Fix a crash when using graphics library Cairo versions between 1.15 and 1.16.0.