Several libraries and XFCE plugins were updated in the 20171007 snapshot and Mesa 17.2.2 had several Vulkan ANV/RADV driver fixes. Support for LLVM 5.0 for the Gallium3D architecture when using SCons was also added with the new Mesa version. YaST 4.0.10 fixed the handling of Pretty Good Privacy (PGP) signatures when running in insecure mode. END_OF_DOCUMENT_TOKEN_TO_BE_REPLACED

Snapshots released the past two weeks of openSUSE Tumbleweed have slowed down a bit, but new software continues to be updated in the five snapshots that have been release since April 6.

The most recent snapshot, 20170417, brought Samba 4.6.2, which had an enormous amount of bug fixes and addressed regression issues introduced by the security fixes for CVE-2017-2619. gPhoto had lots of improvements thanks to the update to libgphoto2 2.5.13. The snapshot also updated ethtool to version 4.10, which synchronized the utility used for displaying and modifying some parameters of network interface controllers with the upstream release, and yast2-fonts’ 3.2.0 version fixed regression introduced in version 3.1.17 and added UTF-8 encoding to Ruby strings.

Snapshot 20170414  provided the 3.5.25 version of squid in the repositories, which fixed aspects involved with data connections and FTP traffic intercepts, and yast2-dhcp-server’s 3.2.2 version fixed a crash happens with the latest yast2-core and yast2-ruby-bindings packages. The premier library for Internationalization Components for Unicode (ICU), which provides globalized support for software applications, was updated to version  58.2 and fixed some issues for Cantonese, Greek and Arabic users as well as updated Emoji characters and 19 new symbols for the new 4K TV standard.

Mozilla Firefox fixed a startup crash on Linux with it’s 52.0.2 release in Tumbleweed’s 20170413 snapshot and the Linux Kernel was updated to version 4.10.9. Linux Kernel initiator open-iscsi had a large amount of patch removals and additions. The btrfs file system matured even more with the release of version 4.10.2. The suite and art application Calligra received a fix for crash when using arrow keys in version 3.0.1 and it’s Flow chart added undo commands. The snapshot also merged upstream Ceph fixes for the codestream. WindowMaker 0.95.8 added some patches and new features for veteran users. END_OF_DOCUMENT_TOKEN_TO_BE_REPLACED

Creating cool projects is what makes openSUSE so much fun and a recent project by an openSUSE member highlights just how creative and fun one can be using openSUSE.

Adrian Schröter took a Raspberry Pi 3 using openSUSE to create a 3D-printed foldable tripod and took the idea even further by using the Raspberry Pi 3 used to build the tripod to take interval photographs of a Storch and it’s nest with a Sony A5100 camera.

The nest appeared in 2016 and Schröter has been taking pictures of the Storch and it’s nest for a few months. 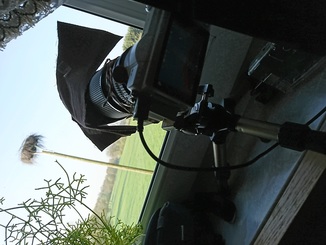 To print the foldable tripod, Schröter made the design using FreeCAD, which is a general purpose 3D Computer-Aided Design program that he packages for openSUSE’s distributions. Sony A5100 support for Gphoto from another community member, Marcus Meissner, helped to get the camera functioning to take photos roughly every 30 seconds.

Schröter has a blog about that updates pictures about the Storch and it’s nest at http://www.storch-bleckmar.de. The blog is in German, so brush up on your Deutsch or just enjoy the photos.