Lars Mueller is one of Samba developers.

I have limited need for Samba which is the most often used way to connect Windows and Linux networked computers, so I couldn’t miss openSUSE wiki article. Wiki can edit anybody, so check who are the authors is part of routine, and I looked at Lmuelle.

He has universal views on Linux and openSUSE, and as you going to see, you can agree with many of them.

I’m 39 years old and was born in Kassel, Germany. After school I moved to Goettingen to study. At hat time I got in contact with UNIX systems at the data center of the university and even got my first SUSE CDs created by the well known Eberhard Moenkeberg.

In 2000 I started to work for SUSE at the support department and got involved into the development of SUSE based business products like the fabulous eMail Server. For a short time I even tried to work in the product management team, but for the everyones peace I changed back to the technical side.

Later I got part of the server technologies team and I focused on the integration of Samba into different SUSE based products.

After the acquisition of SUSE by Novell all people working on Samba got merged into the Novell Samba Team which is part of the SUSE Labs department. Samba article on the openSUSE Wiki provides an overview of what we’re doing and how it’s possible to contribute.

In 2005 the Samba Team invited me to join and I’m still happy and proud of being part of this highly motivated group of developers. Even after many years it’s still exciting to meet other Samba developers and our users, like recently at SambaXP.org.

Tell us about the background to your computer use.

I started to use computers at school at the age of 10. IIRC this had been a system made by Olivetti and we used magnetic strips to store our data and programs. Next there had been Sinclair ZX81, Atari 600 XL, Commodore 64 and an Amiga. The next step (back?) was some i386 system when I had to prepare some papers at university.

Today I’m performing all my work with a openSUSE 11.1 workstation. Thanks to the virtualisation features provided by modern CPUs I’m able to run even Microsoft systems without the need of closed source, binary only software on the infrastructure level.

When and why did you start using openSUSE/SUSE Linux?

When did you join the openSUSE community and what made you do that?

I’ve started to provide recent Samba binaries for SUSE based products several years before the openSUSE project was born. But the openSUSE Build Service (OBS) and its features convinced me to change the approach of creating packages as it is much, much easier.

We as the Novell Samba Team now are a simple consumer of the OBS and are quite happy about how easy it is for us to provide a recent and consistent Samba packaging service to SUSE users and even beyond.

But to answer your question it was spring 2008 when we started to use the OBS. We’ve tried several other approaches to provide Samba binaries before. But at the end OBS looked most flexible and provides many features in direction of collaboration. With my samba.org hat I would like to see getting more non SUSE developers involved.

But even before we maintained Samba on openSUSE to provide a starting point for Samba users of SUSE products. While doing this we always have the generic upstream Samba.org work in mind and put as much as possible into the generic wiki.samba.org .

In what way do you participate in the openSUSE project?

I’m trying hard to keep Samba in a good shape with openSUSE. Beyond this I sometimes touch some pieces of software I’m using myself.

What especially motivates you to participate in the openSUSE project?

It’s the Open Source and Free Software approach which is driving me.
I’m mainly a technician but the level of freedom provided by this is a driving force to me.

What would be your the most important contribution to the openSUSE project and community, or what is the contribution that you’re most proud of?

Maybe the “cups options” parameter of Samba’s smb.conf which defaults to “raw” with the binaries we provide to our users. You no longer get a ‘Unsupported format “application/octet-stream”.’ message if you spool a print job to a Samba server configured this way. Hey, it’s even possible to “lpr /boot/vmlinux-2.6.27.21-0.1-default.gz”.

When do you usually spend time on the openSUSE project?

Three words to describe openSUSE? Or make up a proper slogan!

At the moment I’m heavily impressed by the directions the openSUSE Build Service stuff is going. Therefore even for openSUSE “always in motion” counts.

What do you think is missing or underrated in the distribution or the project?

Propper handling of the install of multiple kernels. Hell, that got addressed recently by zypper. Unfortunately smart and yum had this since quite some time, but one windmill lesser is always good.

Next please allow us to set the number of installed kernel packages - the default should be two - and always keep the currently running kernel. Then it’s more likely we’re able to boot into a working system again.

What do you think the future holds for the openSUSE project?

More changes due to more new users. We have to face the standard, non technical user while keeping the system attractive to those using it since many years.

Even if this might sound like suicide I would drop the default decision agains one prefered desktop. The new users I have in mind don’t care about KDE, Gnome, fvwm2, or any other of the favorite window managers. They need a system with a TCP/IP stack and a working web browser. Maybe a multi protocol chat client (jabber, IRC, MSN, AIM) including video and audio is a must have.

Asking this type of users about which desktop system they would like to use is like asking the passanger of a train if they prefrer an engine from Siemens or Kraus Maffei. When a train arriving at the destination is their only goal. And with a computer the majority of users have the goal of getting the daily work done.

BTW, As I’m sitting mainly in my home office it’s very unlikely any of the desktop guys will kill me immediately. :)

A person asked you why he/she should choose openSUSE instead of other distribution/OS.

As I don’t care if you use openSUSE, Fedora, or Debian I’m not able to answer this type of question.

And even if you decide to use Microsoft or any BSDish system it’s up to you.

But I always try hard to convince people to use Open Source Software cause by several reasons: a) you’re independent and can’t be locked by a vendor, b) you’re able to fix stuff without a particular vendor, c) sharing goods saves resources, d) I believe in a better technical result caused by the collaboration.

Which members of the openSUSE community have you met in person?

Much to many to remember. And I would forget an important one anyhow. I even can’t count the people which have slept on the Open Source Sofa in Nueremberg.

How many icons are currently on your desktop?

Zero. Else I would not be able to see these nice KDE 4 background pictures. I’m currently using KDE 4.2.3 as available from the KDE:/KDE4:/Factory:/Desktop repo.

What is the application you can’t live without? And why?

Cause else I would not be able to reply to your mail and to answer your questions.

Which application or feature should be invented as soon as possible?

As soon as this is done the Open Source community should consider to implement a highly integrated directory based authentication service as it is provided by Microsoft’s Active Directory. No password caching please! I’m talking about Kerberos and friends. See Ralf Haferkamp’s mail on this topic with references to the SSSD project.

Which is your preferred text editor? And why?

vim as I’m not able to use the ctrl key. No, no, no flames please. I’m lazy and I’m using vi(m) since more than 15 years now. And retirement is this close. :)

Which famous person would you want to join the openSUSE community?

I would like to see people like Naomi Klein and Noam Chomsky joining the OSS community. Independent if it’s Debian, Fedora, or openSUSE.

We need to get the attention of the masses. At the moment it looks like Apple is able to deal better with this.

Which computer related skills would you like to have?

Being able to quit emacs without the kill command. Honestly my firmware version is lacking many more important features. Maybe someone takes the time and teaches me to use gdb in a more efficient way.

The Internet crashes for a whole week – how would you feel, what would you do?

Happy for at least one hour. No new mails by bugzilla.

I would simply ask Tina for a good read.

Which is your favorite movie scene?

I have nothing in mind rigth now. Honestly it’s many years ago since I was in a cinema the last time.

What is your favorite food and drink?

Favorite game or console (in your childhood and nowadays)?

In the childhood the Amiga with Emerald Mine (IIRC) and nowadays it’s bash and vim.

What is your preferred way to spend your vacation?

Hiking in the woods.

That’s a hard question. I would try to make a conservative investment and split the outcome into several directions: real, sustainable development of the third world, fight against software patents, and support of medical science research.

If traveling through time was possible - when would we be most likely to meet you?

Somewhere in the future.

There’s a thunderstorm outside - do you turn off your computer?

Have your ever missed an appointment because you forgot about it while sitting at your computer?

Show us a picture of something, you have always wanted to share! 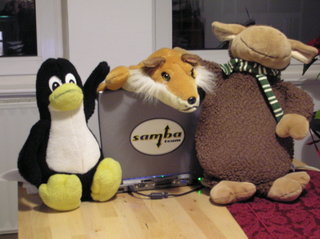 is a picture of the team which maintained the network in our old flat in Göttingen. You also see (one) of the laptops I later unintentionally killed by flooding it with milk. Yes, there are reasons why newer systems have these drains.

You couldn’t live without…

Tina, my significant other.

Which question was the hardest to answer?

The $1.000.000, cause I believe it would make my life much harder to decide how to deal responsible with the money.

What other question would you like to answer? And what would you answer?

The question? I don’t know.