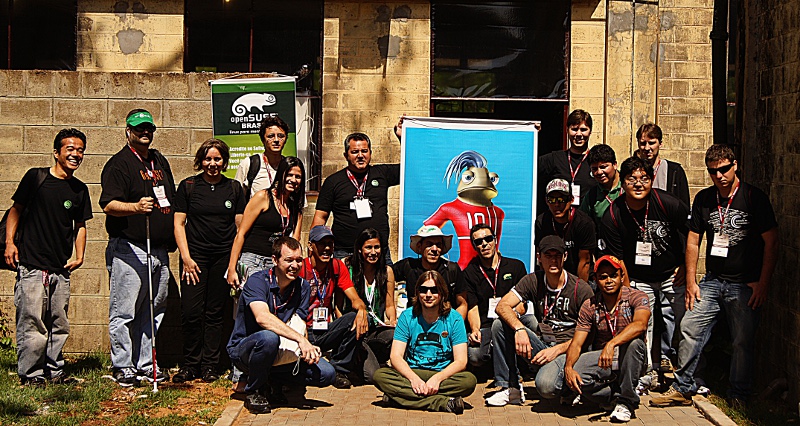 A few weeks ago, Latinoware offered an opportunity for the Brazilian openSUSE ambassadors to organize an ambassador meeting, combined with a great showing at the Latinoware event itself. The ambassadors gave a series of talks and workshops while answering questions at the booth and helping users with the installation of openSUSE. International visitors Bryen Yushenko and Jos Poortvliet flew in to attend the ambassador meeting, get to know the team and give keynotes about the importance of accessibility and the openSUSE community itself. It is safe to say that the event was hugely successful and of course a lot of fun!

Many semi-government organizations or government-run companies in Brazil, operating important communal services, have a dual purpose. A library provides books and a Museum shows it’s guests the beauty of art. But they have other goals too like creating jobs or improving welfare. Latinoware itself is an example as it is hosted by Itaipu. Itaipu is ‘s worlds largest hydroelectric dam located across the Brazil-Paraguay border (also close to Argentina) and near to Foz do Iguaçu, a city with about 500.000 inhabitants. Foz do Iguaçu is a very touristy place, as it features the world largest water fall (Cataratas do Iguaçu in English is Iguassu Falls, the water falls of Foz do Iguaçu). It used to feature an even larger waterfall - the building of the worlds largest hydro-electric dam has however turned the worlds second largest waterfall into the biggest. This collaborative effort between the two countries generates about 19% of Brazil’s and almost 90% of Paraguay’s annual electricity needs. Itaipu invests heavily in social programs to decrease social inequality, build schools and care for the environment. And it organizes Latinoware - an attempt to increase education and support the local economy. I don’t have to argue with you why Free Software is far better for the local economy than proprietary - great to see this is recognized by Itaipu. Itaipu itself makes heavy use of Free Software, running thousands of openSUSE and SUSE Enterprise systems. John “Maddog” Hall explained on the bus to the conference location: they have a long term investment here. When they started building the dams, software was new - and so were software businesses. Even now, the time needed to recoup the building costs (and hence the minimum life expectancy of the project) exceeds that of most software companies. Imagine the damage if Itaipu would suddenly be stuck with unsupported software running some of it’s most crucial infrastructure! Itaipu wisely decided to go for a more long-term, durable solution build on Linux. This provides them with software which is maintained by a huge international community of large and small businesses and individuals - and even if they would fail to maintain it, Itaipu has the freedom to do it by themselves as they have access to the source code. 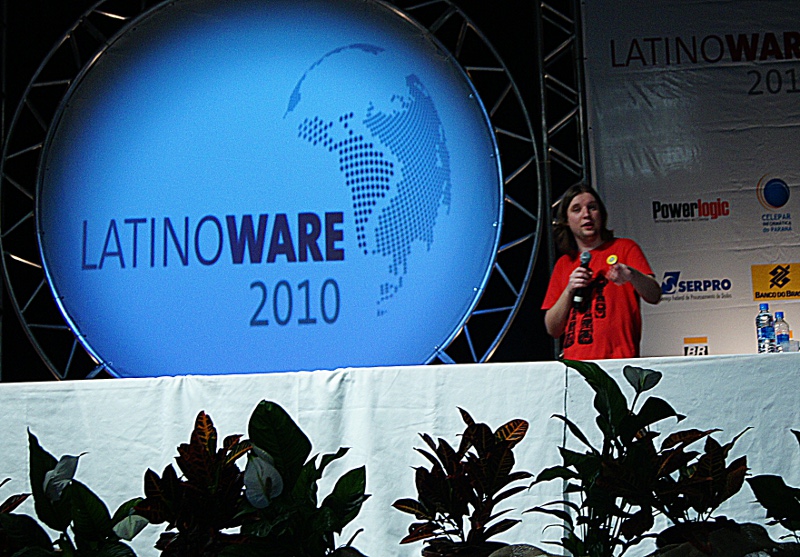 Latinoware is a big conference with thousands of visitors and many simultaneous tracks accompanied by a large exposition area. Many prominent Free Software projects gave presentations and featured a booth, as did the openSUSE team. Most of the openSUSE ambassadors arrived late on the night before the conference so the breakfast at the hotel turned into a meet-and-greet. At the conference the team quickly set up the booth and started to prepare for the talks and workshops which were scheduled. There was quite a turnout and unfortunately the supply of openSUSE DVD’s provided a serious stumbling block - customs had stopped a shipping of 1000 DVD’s at the border so there were only a hundred or so to give away. The ambassadors mitigated the issue by performing openSUSE installations at the booth, thus ‘sharing’ the DVD’s in true Free Software fashion. The first day ended with a party including a rock band at conference venue, openSUSE people fueling party spirit with Bryen Yushenko in the lead and yours truly bouncing around as well.

The second day had two keynotes given by openSUSE visitors. Bryen Yushenko talked about how thinking about accessibility impacts common software development and your writer spoke about the open and collaborative atmosphere in openSUSE which has resulted in such innovative technologies as the openSUSE Build Service, KIWI and upcoming projects like Bretzn. Like the first day there were other talks and workshops, same as the third day. Friday the openSUSE team further organized an ambassador meeting with over 20 people attending. We did a round of introductions and spoke about the future of openSUSE in Brazil and South America in general. The ambassadors who volunteered at Latinoware to help out received some cool rewards including openSUSE branded soap, courtesy of the creative brain of Carlos Ribeiro. 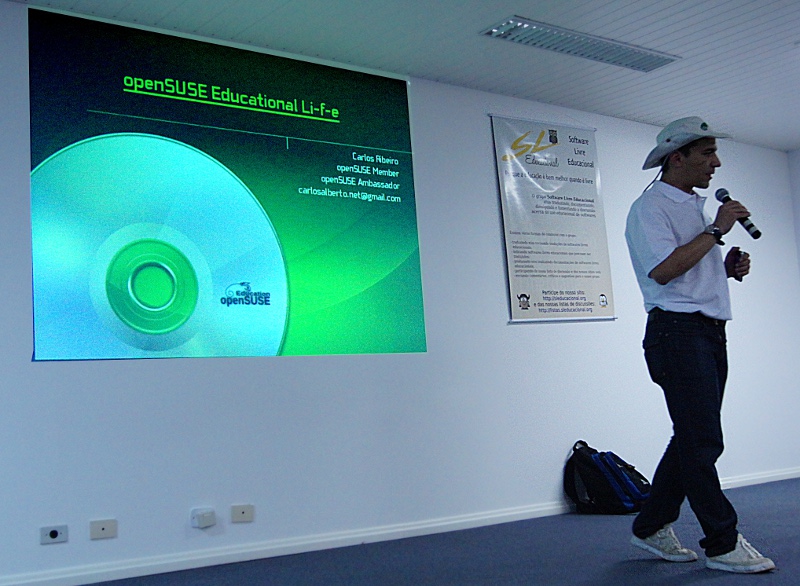 Friday night the openSUSE team invited people from the KDE, GNOME and Latinoware event teams at the hotel together for a party. A few ambassadors went out to get Pizza & Beer, and upon their return the 25 FOSS enthusiasts enjoyed some quality time together. Rest assured that the openSUSE team in Brazil is very much alive and kickin’ and has great plans for the future. A big thank you for the invitation from openSUSE ambassadors Carlos and Izabel - and extra special hugs for Izabel who organized both the openSUSE and the GNOME booth, took care of hotel, travel - in short, without her Latinoware would have missed two excellent projects ;-)

At the end of the event, we heard many visitors say that it seemed like openSUSE was everywhere. Many other stands like the GNOME and KDE booths but also TV-Radio Latinoware featured openSUSE desktops; the openSUSE ambassadors organized a large number of well-attended talks and workshops; there was the openSUSE keynote; and at the booth many visitors brought their laptops to be equipped with a fresh openSUSE installation. In short, we made quite an impact at the conference and brought fun with us! 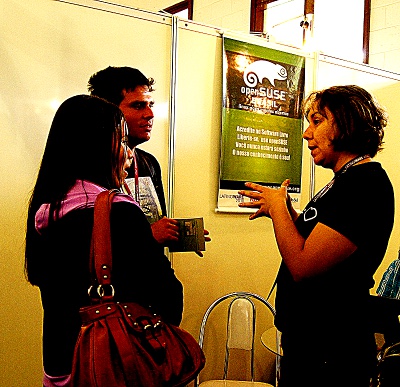