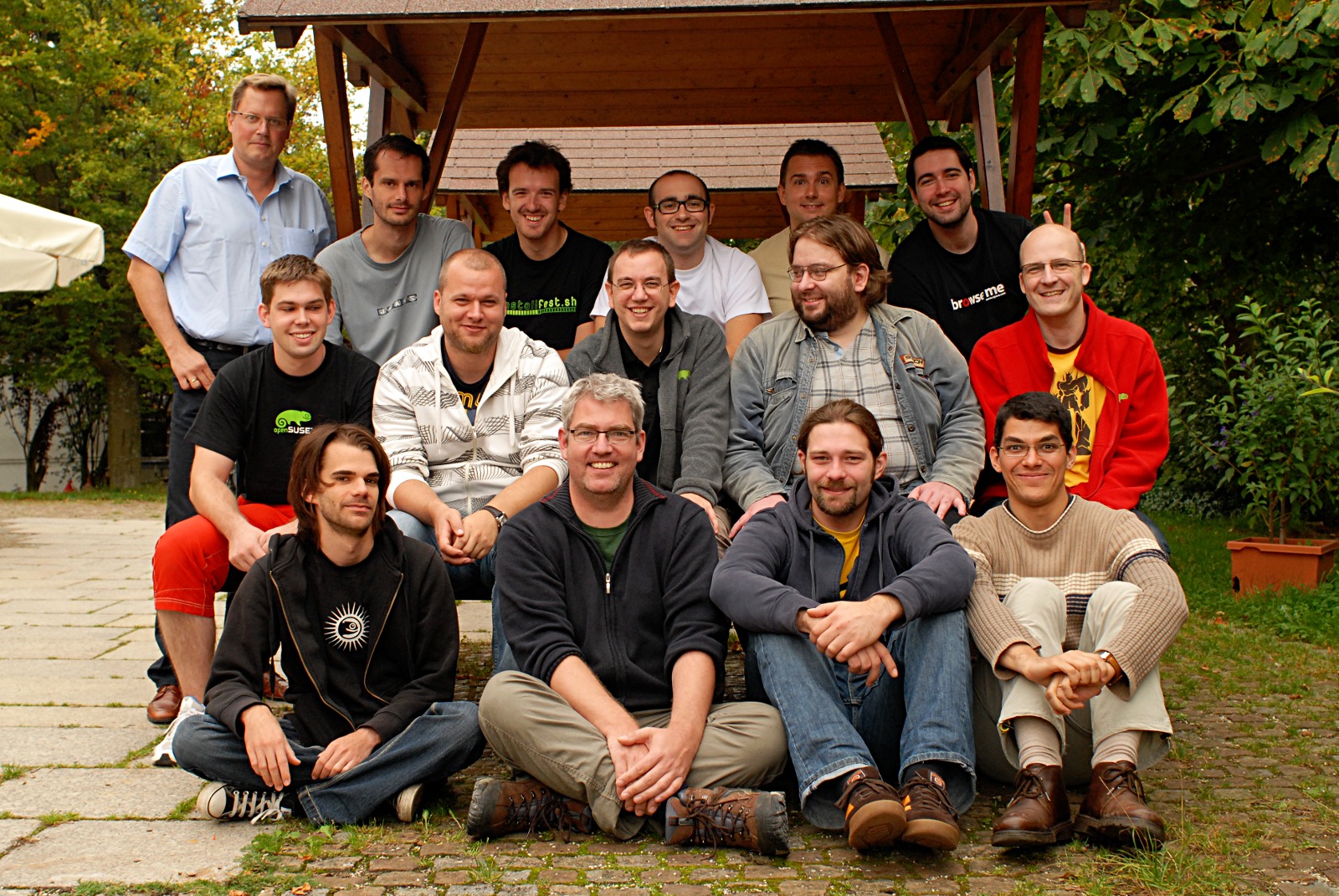 At the end of the year it is the time for reviews and the openSUSE Booster team did not want to let that opportunity slip. So what was important in 2010 from an openSUSE Boosters perspective? What happened, what progress was made, how did the boosters help openSUSE? A report from Klaas Freitag.

Who are the Boosters

For those who do not know who the Boosters are: We’re not Tuxies favorite boy group, but a bunch of people dedicated to help the openSUSE Project in any way we can. The team consists of 13 people (BTW: widely known as the thirsty thirteen) with skills ranging from low level C hackery over Ruby on Rails mastering to Graphical Design or Project Management. Our team picks milestones and works on them in a agile fashion while always following our mantra: Grow community by enabling community. You can meet us at the usual places like IRC, the mailinglists or events were we show up and spread the word about openSUSE. We’re there to make contributors life easier and more fun, so if you have anything do not hesitate to talk to us. We’re here for you.

So let’s quickly fly over the year of 2010 and see what was nice and important.

Lets start with a very important event, FOSDEM in Brussels in February. We traveled there by coach the first time. That was remarkable because there were some push back against before (long journey) but we did it because it is cheaper, which means more people can go. The result was that we all were quite pleased by the coach trip as it was comfortable and fun, and finally not so much longer than the flight. And yes, consider how much carbon dioxide was saved? Since that trip I am constantly nagging for budget for an openSUSE Coach…

I held a talk about Hermes at FOSDEM which was, well, not a great success, that thing seems hard to market. That happens, others were more succesfull, like Christopher with his talk about image building with Kiwi. Michal had a meeting with MySQL packagers from all over the world at FOSDEM, which was probably the first real initiative to collaborate on cross distro topics. I also bought a GNOME T-Shirt, met tons of old friends, had cherry beer and got a cold as usual on FOSDEM.

Also in February, we hosted a dev meeting of 25 KDE hackers here in the Nuremberg office. They worked on the highly rated plasma workspace for KDE 4.5. I still wonder how Will managed to get around with definitely no sleep for days.

At home, at the beginning of the year we worked on projects called “Integrate all Infrastructure under one Umbrella” which resulted in the Bento web theme nowadays at all openSUSE sites use. It provides short ways from one site to another by thought through and pretty menus. Robert did a real great job with that and we got a lot of external recognition for it. At the same time the Wiki project started which was a huge project the Wiki community was pulling together with Henne and Tom. The decision was to create a new Wiki from scratch, implement reviewing features and transfer all relevant content into the new one while making sure to not transfer stuff nobody needs and maintains any more. That was a big thing and caused a lot of discussion. Today we can look back and say that we now have a well structured Wiki with valuable content. Fortune favors the bold :-)

In parallel to that, Coolo and Tom were contributing to the new BuildService web interface. After long working hours we finally came out with a great web interface for OBS which was a big bump for the whole project, as it makes working in OBS much more fun. I remember that whole thing being started as a sprint called “Factory status”, aiming to provide a good overview page for the Factory project in OBS. It grew a bit more ambitions, but, well, that’s how it goes if things are in movement ;-)

In June, there was LinuxTag in Berlin where most of us participated with talks in the free program or workshops on our booth. We educated a lot of people how to contribute to openSUSE in various ways. From submitting code fixes through the Build Service to creating great Geeko graphics with Inkscape to how to twist their own Geeko out of pipe cleaners.

In July, openSUSE 11.3 was released. That was lots of work beforehand with quite some boosters involvement, as Mr. Distro Coolo is part of the team. However not only he is contributing to the distribution, we all have our shares in it. 11.3 was a good one, it got good press and showed that we as a community are doing great. All over the world release parties were organized, some Boosters took over the one here in Nürnberg. Nice party with some talks, along with BBQ and beer. The latter ran out at 7pm, because many community members showed up. Cool, I love that kind of stress to organize food and beer quickly to let the party go on :-)

Also in Summer, GUADEC as well as Akademy took place for our desktop Boosters. Vincent rocked GUADEC and gave away Geekos and stuff and advertised openSUSE as a good platform for the upcoming GNOME3. Will could not go to Akademy this year for a very good reason called Anna :-)

In autumn, the for me most exciting event of the year took place, the second openSUSE Conference. We were heavily involved in organizing, program committee work, giving talks and presentations and all what is involved with that kind of large event. It was a huge success, as a very active and passionate community showed up. Discussions went from a “This is what we did” in the last year to a “this is what we could do” which is so great to see as that is resulting in innovation for the whole project. As a result some very concrete sub projects were created such as “Project Brezn” and openSUSE Invis which slowly evolves.

After the conference and the release of 11.3 we started to dig into milestones again with openFATE and Connect. Since a couple of weeks we have a nice looking openFATE that has the features that make it possible for the feature screening team to work on one of our most important tasks in our project: Looking into the future of the distribution with feature evaluation. We also implemented the future of the user/group handling for all the openSUSE services with a social twist: Connect. Our own instance of a social network that makes it possible to connect the people that make this project what it is and at the same time makes it possible to centralize the user data.

So all in all the boosters had a very busy and prosperous year 2010. All of us carried their individual share of work in the various areas of the openSUSE project we participate in, be it in the openSUSE KDE and GNOME Teams, the openSUSE Distribution, the openSUSE tools or the openSUSE Board. We attended a lot of events and organized a couple of our own with great success. And we worked together on the most pressing milestones we saw for contributor growth in a fun and clever way. All in all we helped a lot of contributors to stand up, take responsibility and do get their hands dirty for the openSUSE Project. That makes us proud and we will do this smarter, faster, better and stronger in 2011. Promised!