A little over two weeks left for openSUSE 12.1 to be released on November, 16th 2011. And there is no better way to enjoy the new release than with your fellow openSUSE peers. So, attend or organize a Launch Party! These events around the openSUSE release can be anything - from a party in a pub to a series of presentations at an office. But there is a common theme: cool people sharing some fun and talks around the latest openSUSE release!

Read more on how to find out if there is a release party in your neighborhood or how to organize one!

You can of course wait until the 16th and look around for fireworks and party-ing people but it might be better to prepare a bit… So check out the Launch party wiki page. No party close enough? Poor you… But there is a way out! How would you feel in organizing one?

It’s not hard, everyone can do it! You can see at our Launch Party HOWTO page that there are many ways to have a party - you don’t have to have fireworks, a nice picknick is just as cool, if not more! Use you imagination and do something creative!

Launch Parties are probably the coolest way to introduce people to FOSS and to introduce FOSS people to openSUSE. You don’t have to be an ambassador or something to organize one and you can ask for promo material for your party! 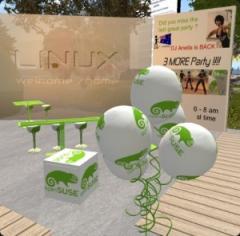 Yes, we plan to get some cool stuff™ to you if you organize a party. We are working hard to have the openSUSE 12.1 DVD’s ready as soon as possible and will send them, together with some flyers, posters, stickers and other goodies to the registered release parties. We unfortunately don’t have the DVD’s ready before the release date and shipping and handling also takes time so you’d have to organize a party 2-4 weeks after the release to get the stuff in time. See the Launch party wiki page for more information.

If you want to organize a party but you have some questions please contact the Marketing Team on the Marketing Mailing list or the IRC channel. You should also try and involve the openSUSE ambassadors in your area. We’d all be happy to help you have a smashing party!