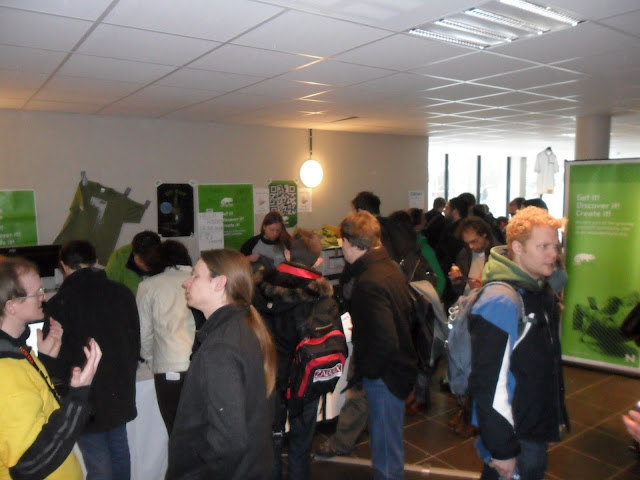 openSUSE brought lots of fun to FOSDEM in Brussels, Belgium. We’re all exhausted now from selling beer, t-shirts, hats and giving demonstrations of openSUSE with GNOME Shell, KDE, Plasma Active, openSUSE-on-ARM (running XFCE) and countless other things. Yet we did want to tell you about FOSDEM before we go catch up on sleep!

Like last year, the crew from the SUSE office in Nuremberg loaded up a bus with people, beer and anything/one else needed for FOSDEM. The bus was left during Friday night at the ULB where FOSDEM would happen. Despite the risk of somebody breaking in and stealing our awesome goodies, it was deemed more important to join the other FOSDEM go-ers in their attack on the tasty-beverage supply of Brussels! Besides, a night outside in the > -10C degrees from last weekend ensured the beer would be cold and ready to drink. 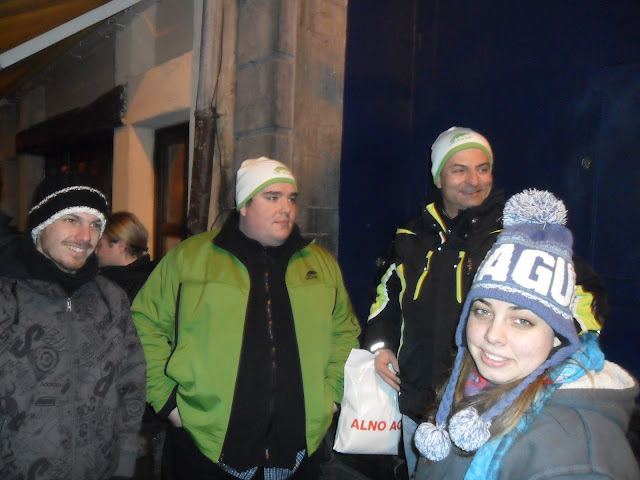 The next morning, those smart enough not to drink too much (or (wo)manly enough to ignore the hangover and show up anyway) prepared the booth for the onslaught of visitors eager to learn the latest about openSUSE and buy the coolest beer at FOSDEM. Besides this great beverage we also had the usual assortment of stickers, openSUSE DVDs, t-shirts (in any size as long as your size is Large) and of course our demo systems showing off openSUSE. This year we had our big touch screens again, one with GNOME Shell, the other with the latest from KDE, as well as an assortment of smaller devices. Several of them ran ARM with either consoles or XFCE and there was a “WeTab” with Plasma Active on it as well.

Interestingly, our beer got “forked” by the Firefox crowd who bought a bunch of them (we threw in some t-shirts) and put a firefox sticker over the Old Toad badge. Yes, “Free as in Beer” and all that. Suffice to say the beer was not only popular (as some evil tongues claimed) because the K building had no other drinks available - everyone who tried it agreed it was actually a high quality lager. If you want to know more about the beer, see here. Sorry, we don’t ship it, but if you look us up at LinuxTag in May (Berlin) we will have some! 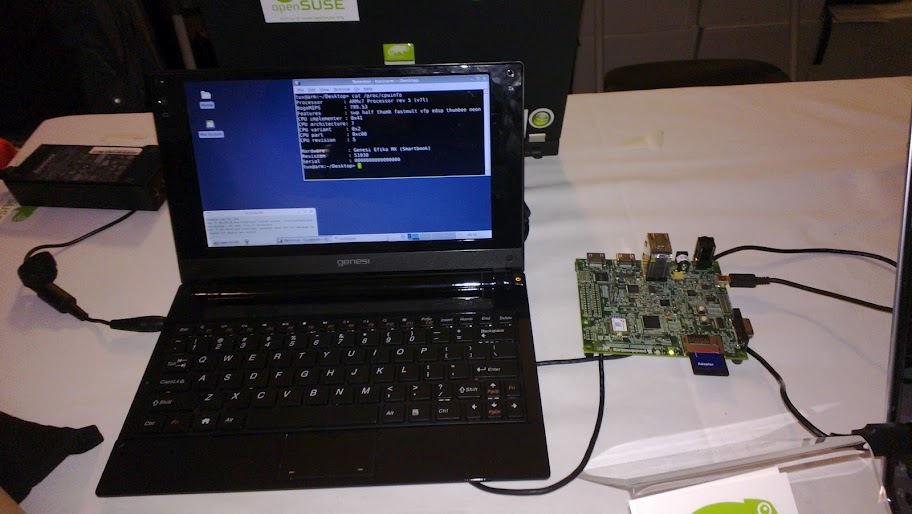 If you have never been to FOSDEM there is little we can do to describe this event. Nevertheless I will attempt to paint you a picture as everyone deserves to know how awesome it is! For starters, as you might know, our beloved Pascal “Yaloki” Bleser is part of the FOSDEM organisation. There is no doubt that the event can do anything but rock! Of course, while Pascal might be as strong as many men, he’s just a part in the mighty wheels that keep FOSDEM running. That is to say: it is big. VERY big. The two days the event lasts (Saturday and Sunday) are packed with over 400 sessions, summing up to over 200 hours of content (yes, in two days), varying from BOF sessions to keynotes and presentations and the attendees litteraly number in the many thousands.

This year, almost all booths were moved to the new K building, which also hosted a number of so-called “devrooms” (project or topic specific rooms). As the old location was getting crowded (crowded as in standing nose to nose breaks) the change was great, both from a hygenic and comfort point of view. Especially since the weather made going outside far less appealing as it had been in previous years - one has to feel sorry for the nicotine addicted at FOSDEM. 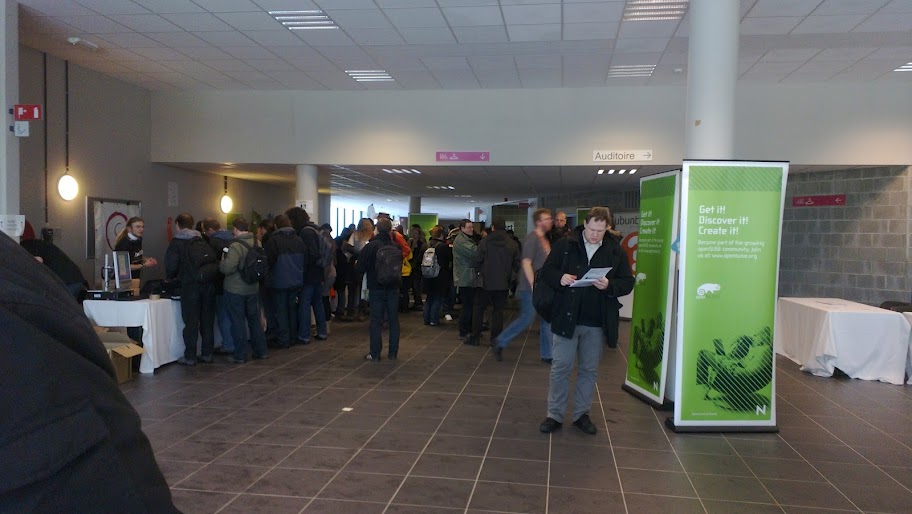 FOSDEM has a number of buildings spread over the ULB university campus, each of them filled with a number of booths as well as many rooms where talks are held. There are some HUGE rooms but most of them have capacities of 80-150 people. These rooms are organized by a FOSS project or by topic: there were the cross-desktop and the cross-distro rooms but also spaces for LibreOffice, Mozilla, embedded operating systems, JBoss, Mono, Java, Legal issues, virtualization, cloud and more. In other words: you will feel the need for a decent cloning machine once you get an idea of how much interesting stuff goes on in those two days. But (un?)fortunately, that’s not all. The “hallway track”, as in, the area around the booths, is absolutely STUFFED with interesting people. Core developers from projects ranging from Python to Arch Linux and LibreOffice to the kernel can be found wandering around. As a matter of fact, many FOSDEM veterans are known to not visit more than one or two talks - and those often presented by themselves. There are just too many people to talk to. And getting in contact with people at FOSDEM is both easy and hard. Hard, as you will find it difficult to find a person you are looking for in the huge crowd. And easy because most people are incredibly easy to aproach and very much open for a chat. 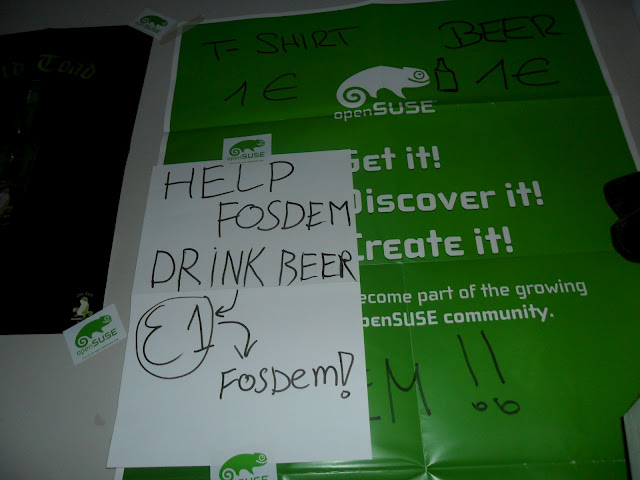 So what did we take away from FOSDEM? First of all - about 6-700 euro from the sales of the t-shirts and beer. This money has been donated to the FOSDEM organisation in the hopes they will use it for something good (like giving themselves a well deserved evening of relaxation, food and drinks).

Second of all, openSUSE is clearly popular and getting more so. Our efforts are recognized and appreciated by our users and that’s a great thing! Many people where very happy to donate a bit for a t-shirt, a hat, some stickers, DVDs and more and we surely convinced quite a few to give openSUSE 12.1 a test drive. There was of course the usual slew of users thanking us for our efforts - as well as those coming with the issues they faced. Interestingly enough, stability was not often a big problem but there are still things “out there” which are not packaged. Hard to believe with the almost 170.000 packages on OBS! But yes, we don’t have the perfect Linux distribution yet, so keep up the good work! There was quite a number of “geeko talks”, as usual. Of course a number of enthusiastic LibreOffice developers consider themselves Green but there were of course talks by openSUSE contributors in the cross-distribution, X-org, and cross-desktop rooms as well as in many other places. Highlights include talks on openQA, OBS, openSUSE-on-ARM, Snapper, a round table discussion around ambassadors with other distribution projects, and much more.

We had many hugs and catch-up moments as we don’t see each other all that often - it was truly great to meet so many friends again. With visitors from around Europe (and quite a few from other continents too) it was great seeing old and making new friends.

There were interesting discussions with fellow FOSS projects, e.g. with the Ubuntu LoCo team from Belgium that had a stand right next to us.

Last but not least, Richard and Tom deserve big hugs for their organizing work. And obviously, so does everyone else who was there. It was awesome because we were all there!