Once again, the Greek openSUSE community was present and rocked in the Free open source software communities meeting, which took place this year in the beautiful town of Serres. We had 5 talks and 1 workshop.

Something that we will never forget from this year’s Fosscomm was the situations we had in the time we spent preparing this meeting. First of all we had a lot of fun preparing the booth stuff and working closely with the Gentoo-el, Gnome and KDE communities for the event since we are friends with most of them, meaning enough hours of making pins, burning CDs and DVDs 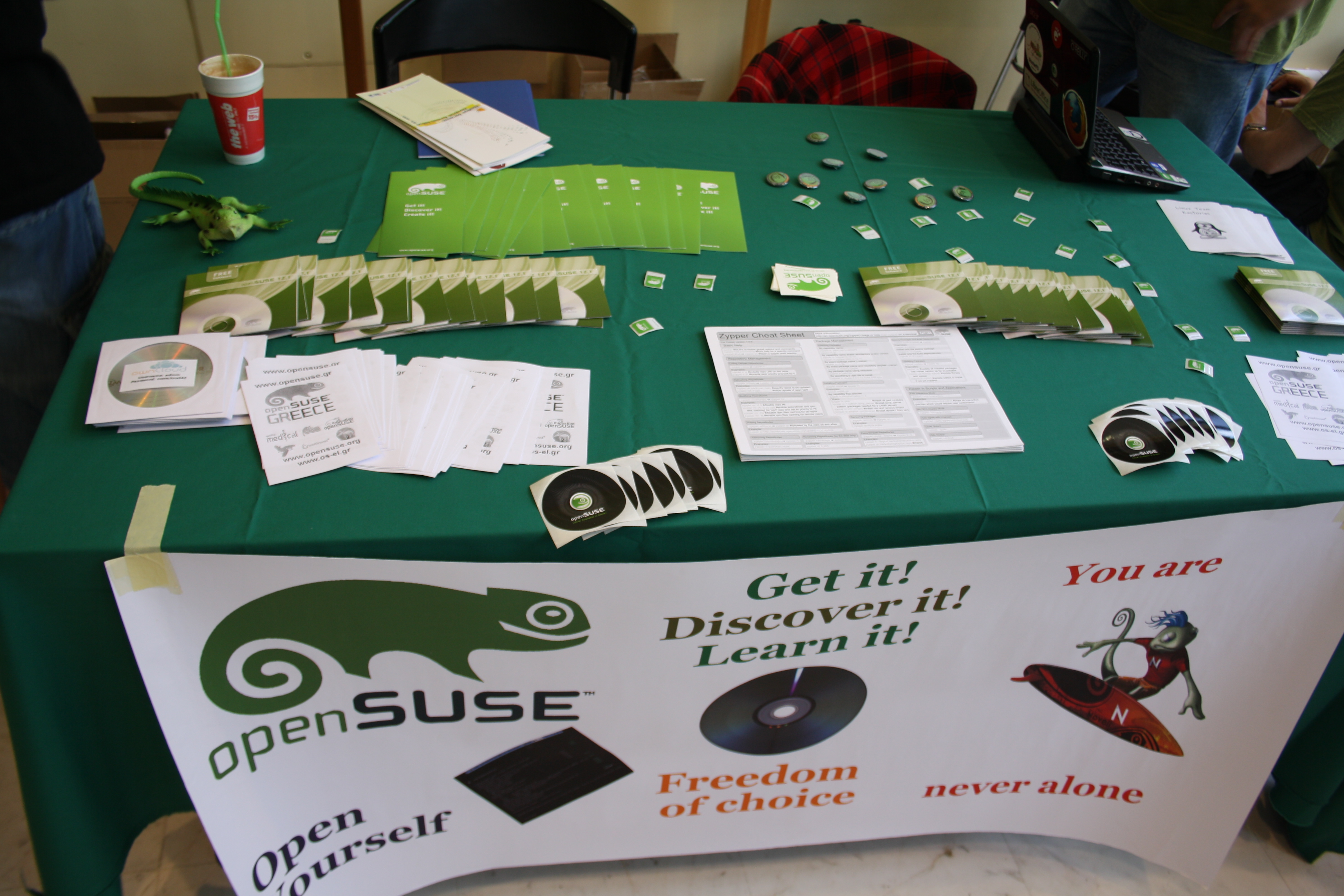 , printing materials etc. Most of us rent cars and together we stayed into my Family’s house 30 km out of Serres. It was not very comfortable but it was sure a lot of fun. Collaboration was the key word to this years event. Unfortunately a few days before the event our friend and community member Chris Loukas had an accident so it was impossible for him to be present, so, Stathis Iosifidis was there instead of him, but due to the nature of Chris’s accident, no information from his side was available in time, so it’s worth saying that Stathis prepaired the whole new ownCloud presentation in less that 48 hours while we were traveling-preparing etc.

** The Meeting**The Welcome Party The night before the meeting the organizing committee had a welcome party for all the attendants. We were there and many nice feelings were born seeing people we had not met for a year, since last Fosscomm. Fun, beers, beautiful people and many interesting talks were talking place in a relaxing environment. Without a doubt, Cloud Computing, Mobility and Collaboration Tools were this year’s main talks of the people there. Everything was showing that this year’s Fosscomm would be at least interesting for all of us. We left the party a bit later than we should, but who leaves a party early?

We arrived at the Technological Institute of Serres (the place were Fosscomm was taking place) early in the morning in order to register and start setting up our booth. People were already there and they were really excited, the atmosphere was electrified and many people were still a bit drunk or hangovered from last night’s party. Booth staff was there, ambassadors were there and visitors were all around getting information about openSUSE, ownCloud, the upcoming openSUSE Collaboration Summer Camp and the coming of openSUSE conference 2013 in Greece, as well as the oSC12 in Prague.

The first day was great, we had many people interested in openSUSE, our talks went smooth and as we’ve learned from the organizing committee there were more than 350 attendants. After that we continued with this beautiful atmosphere at my place were we had a lot of food, alcohol and nice company. The second day was a bit more relaxing since we had less things to do and there were not so many people there. Unfortunately one of our people was sick so I had to stay back with him at my place and take care of him, but the rest of the crew was there in time. 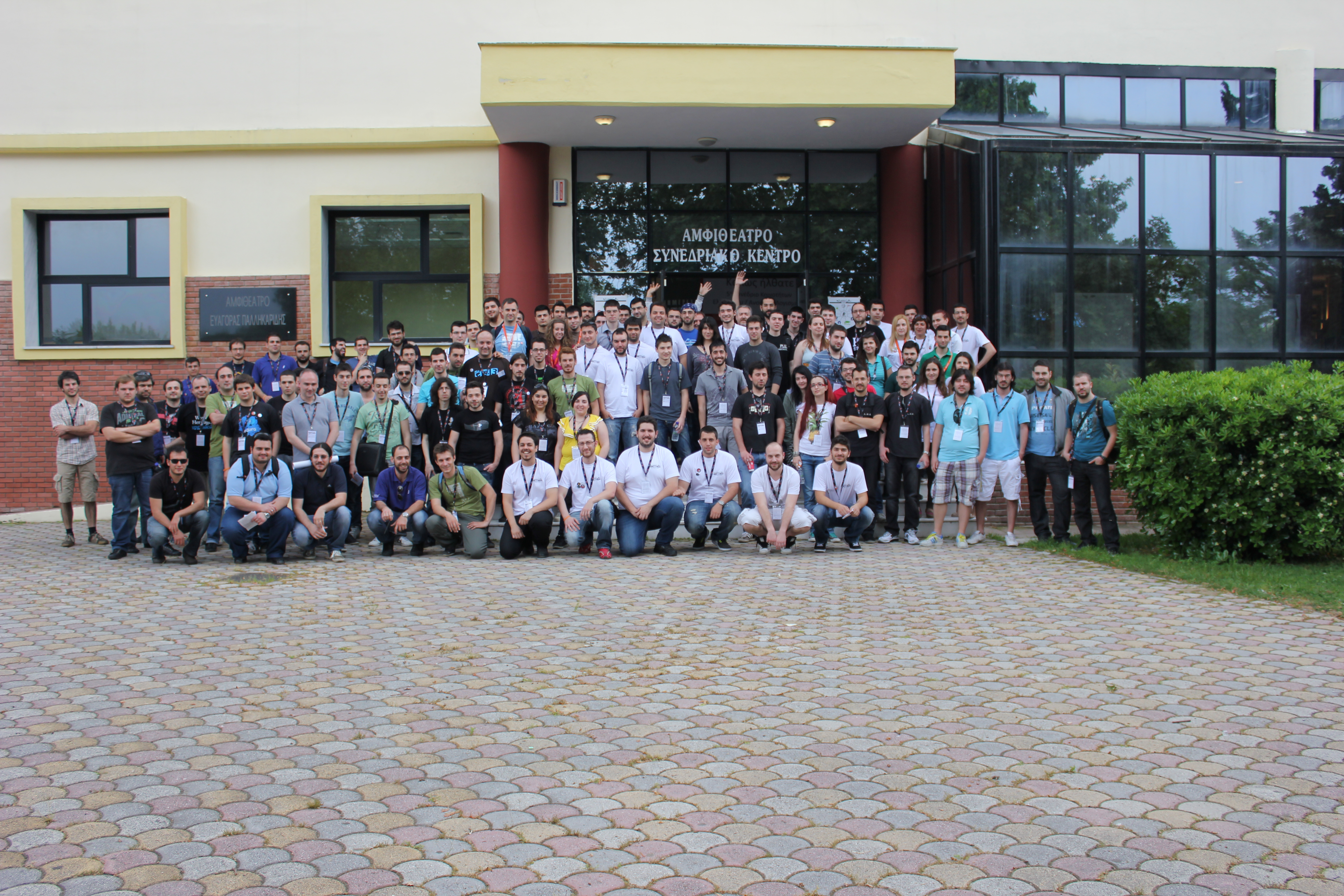 Leaving this year’s Fosscomm behind We left this years Fosscomm with many great things to remember. Before getting back to Thessaloniki many of us had a coffee at Kerkini lake for a relaxing debriefing of this year’s meeting.There were some unavoidable difficultiesbut everything went fine at the end. We went, we attended, we rocked, one more time.