Heya geekos. I’ve checked the ‘curriculum’, and we’re at part 7 of 8 as of today. Which means there will be one more - and sadly final - CLT next tuesday. So for today, let’s deal with some permissions!

As we all know, we can have many users using one machine. To protect the users from each other, permissions have been devised. And we have already discussed file permissions, so let’s refresh our memories with a single click. 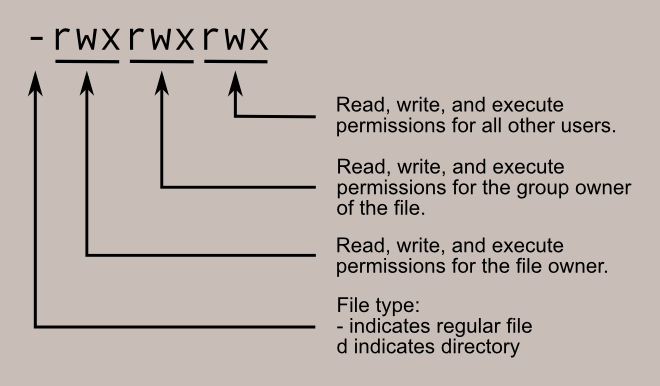 Imagine permissions as a series of bits. For every permission slot that’s not empty, there’s a 1, and for every empty one there’s a 0. For example:

And to see how it looks in binary:

Now, if we would like to have a file with read, write and executing permissions for the file owner and for the group owner of the file, but make it unavailable to all other users, we do:

…where example_file is any file you’d like to try this command on. So, you always have to enter three separate digits, for three separate groups known already from our second lesson. The same can be done for directories.

It is sometimes needed for a user to become a super user, so he can accomplish a task (usually something like installing software, for example). For temporary accessing to the super user mode, there’s a program called** su**, or substitute user. You just have to type in

and type your superuser password, and you’re in. However, a word of warning: don’t remember to log out and use it for a short period of time.

Also there’s an option probably more used in openSUSE and Ubuntu, and it’s called sudo. Sudo is only different in the aspect, that it’s a special command that’s allocated to one specific user. So unlike su, with sudo you can use your user password instead of the superuser’s password. Example:

To change the owner of the file, you have to run** chown** as a superuser. For example, if I’d want to change ownership from ‘nenad’ to ‘suse’, I do it this way:

I can also accomplish the same with changing group ownership, but with a slightly different command chgrp. Easy peasy:

As I already stated, next time we’ll have a photo-finish of sorts. And after that, you’ll be on your own (along with me, wandering through the terminal’s darkness, with only a blinking green cursor as a lighthouse  :) ). Until then geekos, remember to…