openSUSE 13.2 comes with the latest and greatest that the GNOME desktop has to offer – GNOME 3.14. At the time of the release 13.2 offers GNOME 3.14.1, which improves upon the user-experience of GNOME 3.10, that came with openSUSE 13.1, several notches, featuring notably a much improved gnome-shell with pretty-but-subtle animations and multi-touch gestures for the first time. The core applications have all seen remarkable activity during the development of 3.14 (and earlier, 3.12), focused on exciting features but also to make the desktop experience more unified and consistent. 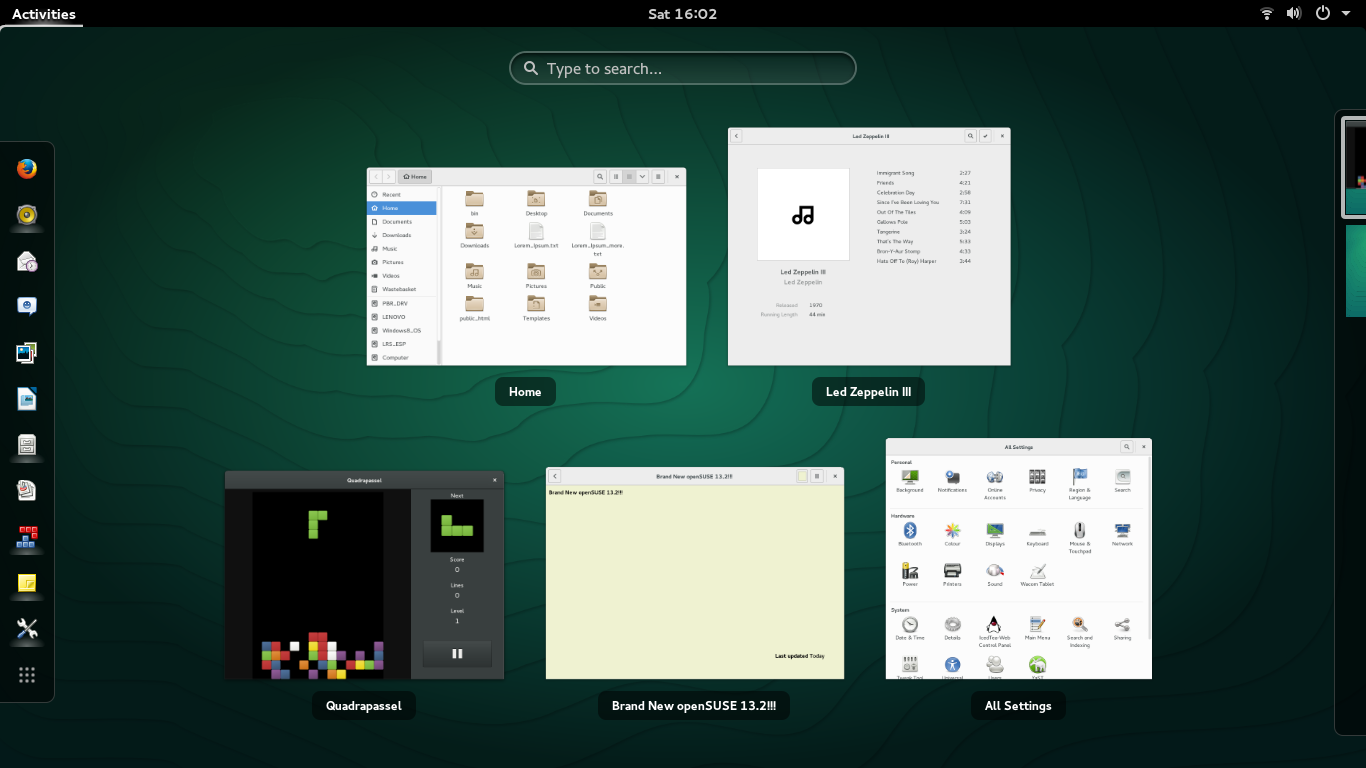 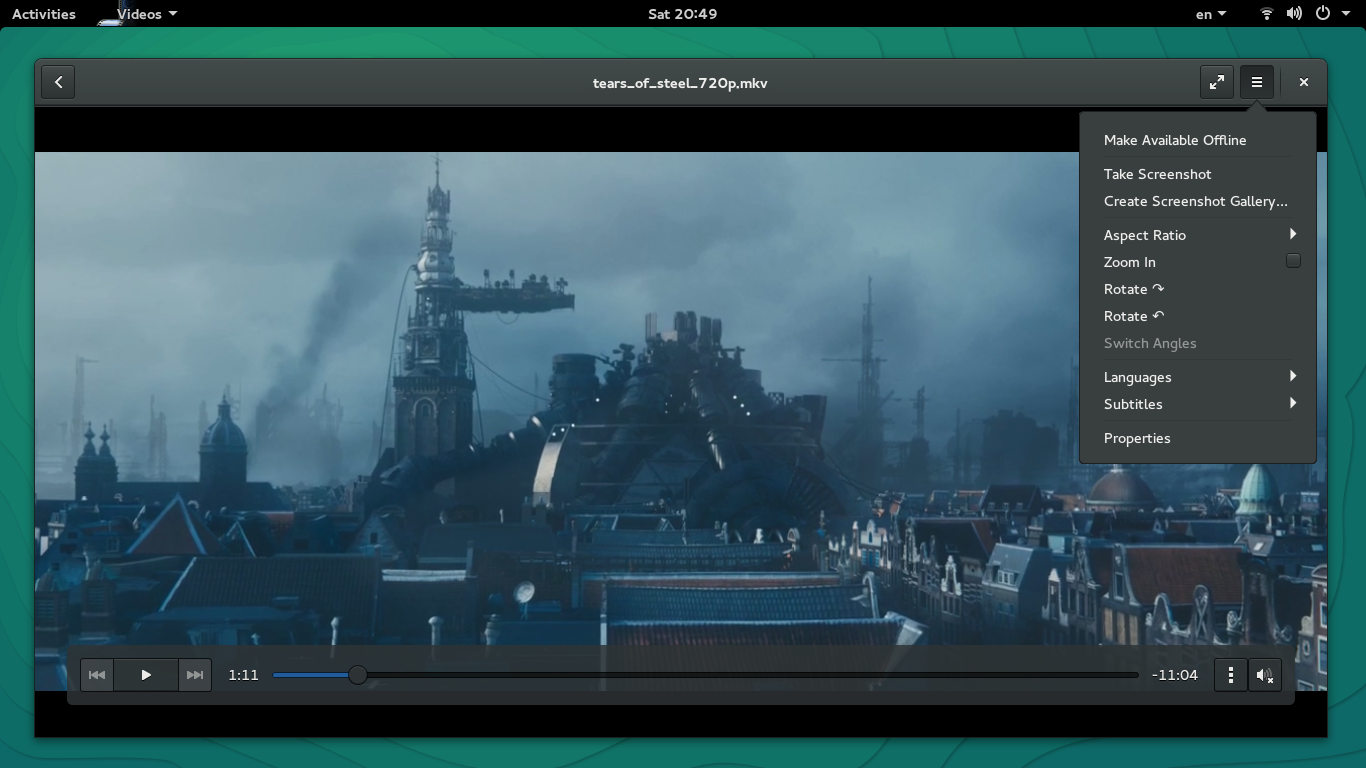 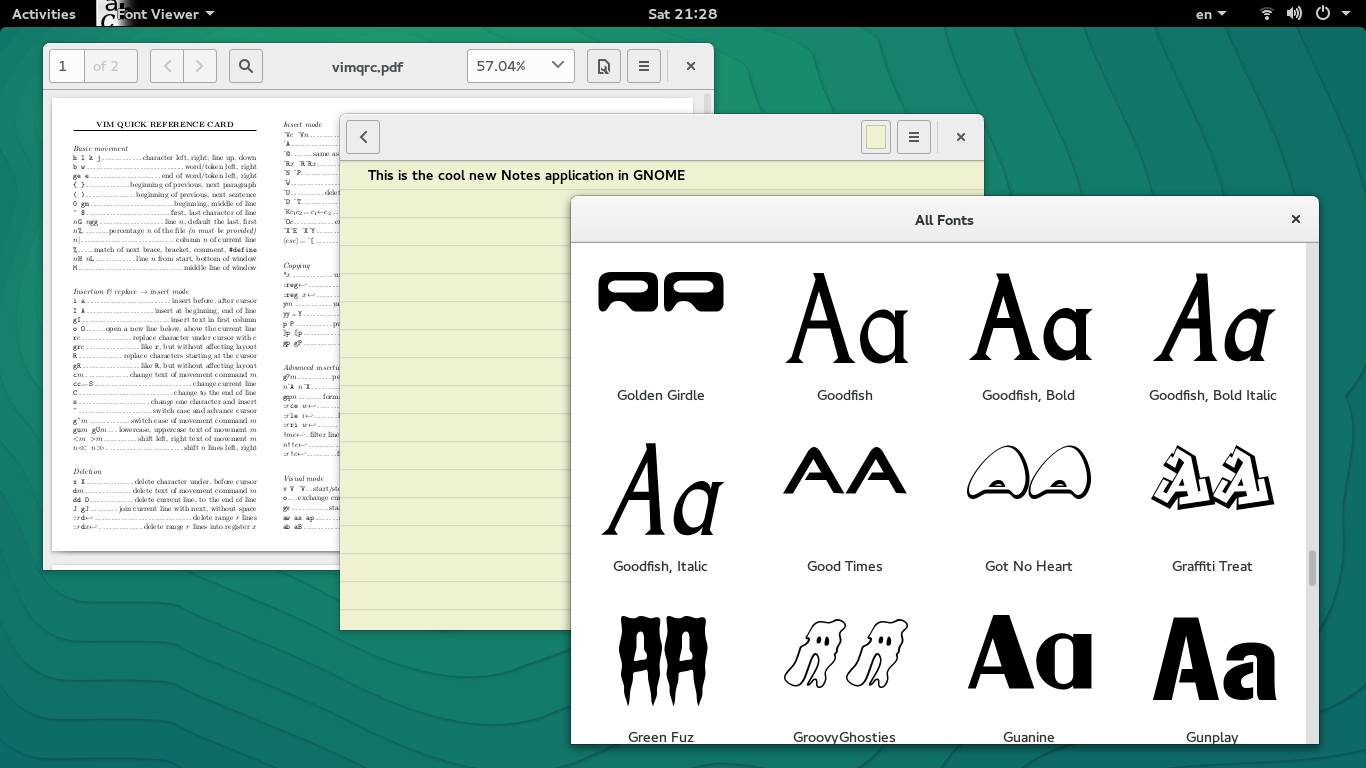 Calculator in the GNOME shell search 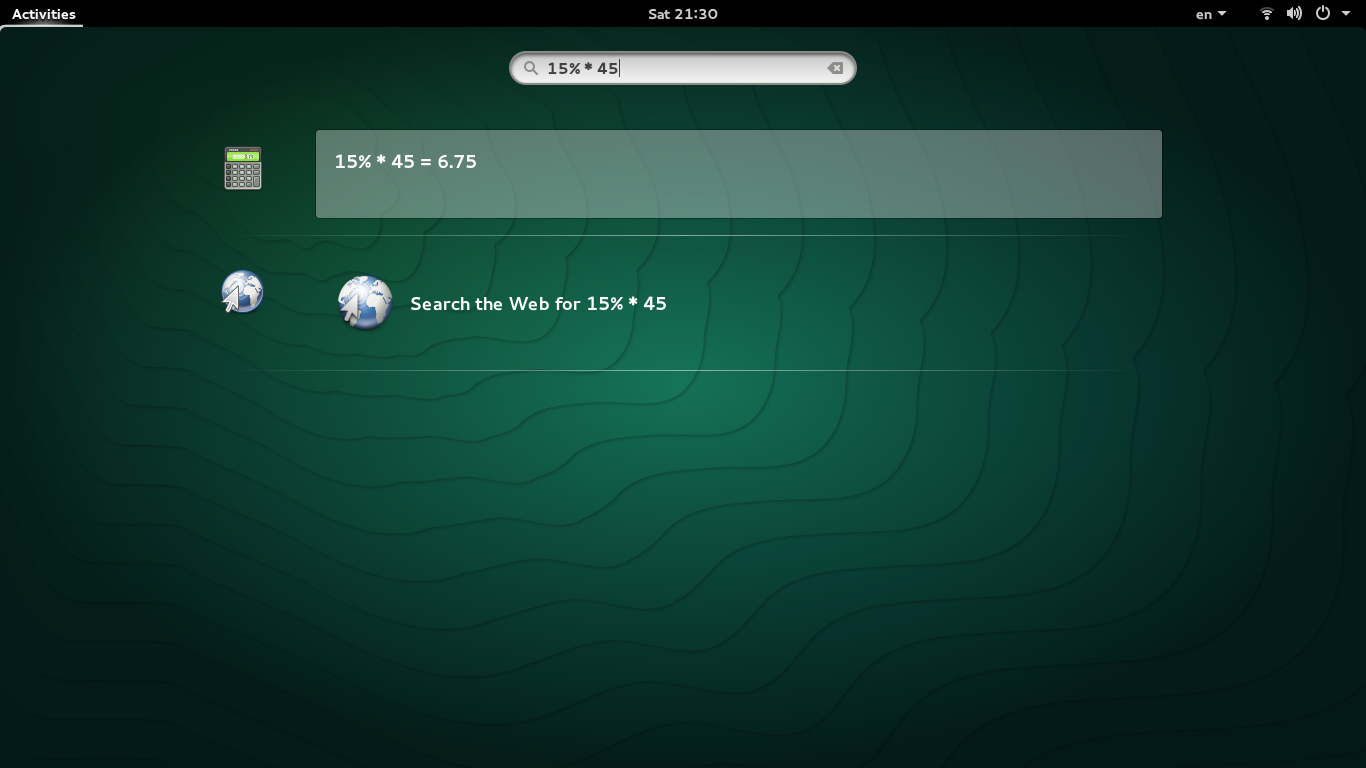 Calculator in the GNOME shell search[/caption]

At the heart of the GNOME experience is the much improved GNOME Shell, handling such trifle as launching applications, switching between windows and workspaces with the grace of a ballet dancer. Gnome-shell, available at version 3.14.1 with openSUSE 13.2, has picked up the ability to respond to multi-touch gestures, including on touchscreens, to open the Activities overview, applications overview and message tray, and to switch between windows and workspaces. In addition, this latest version of the shell features a host of pretty-but-subtle animations that make working inside GNOME a real pleasure.

Typing in a search term in the gnome-shell’s activities overview now gives results for matching files, documents, notes, contacts, photos… and even features inline calculations (just type in 22/7 and see for yourself)!

The applications overview now lists “Sundry” and “Utility” applications in app-folders making the full list of applications less crowded and easier to navigate. In an openSUSE-special touch, the YaST modules are all classed into an app-folder of its own, making it straightforward to launch any YaST module straight from the shell.

Header-bars aka Client side window decorations

The support for header-bars, that nifty combination of window-header and toolbar in one screen real-estate saving gem, which started with 3.10 (so you should have seen a glimpse of this in openSUSE 13.1 already) has proliferated into all major applications. Core applications such as text-editor GEdit, Notes, eps/pdf viewer Evince, Music, Documents all benefit from this development. In addition header-bars have also picked up touchscreen support, so where one could not previously move windows with header-bars around by touch, this is now possible.

Is that a brand new video player? 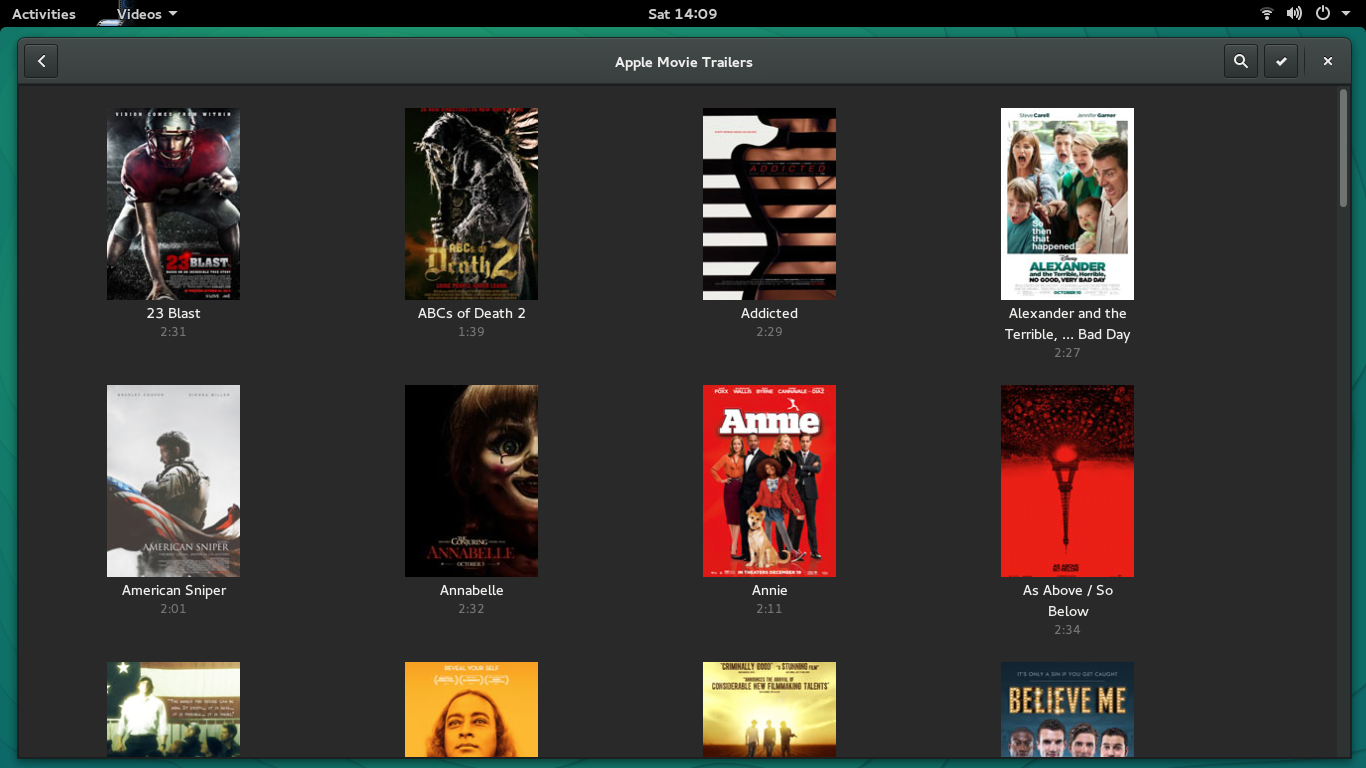 No, it is still totem, for long GNOME’s default media player in openSUSE. Except now, in it’s 3.14 incarnation it has been completely revamped, now showing a list of videos in your home directory when launched and allowing you to switch to a list of online video channels at the touch of a button. The playback controls are now presented as a floating toolbar that automatically hides when you don’t need it, allowing the currently playing video to take up maximum screen area. This refined look carries over to the fullscreen view too.

Behind the scenes (literally!), it still uses the trusted gstreamer backend (which has got updates of its own since openSUSE 13.1), so the playback is still robust and beautiful. 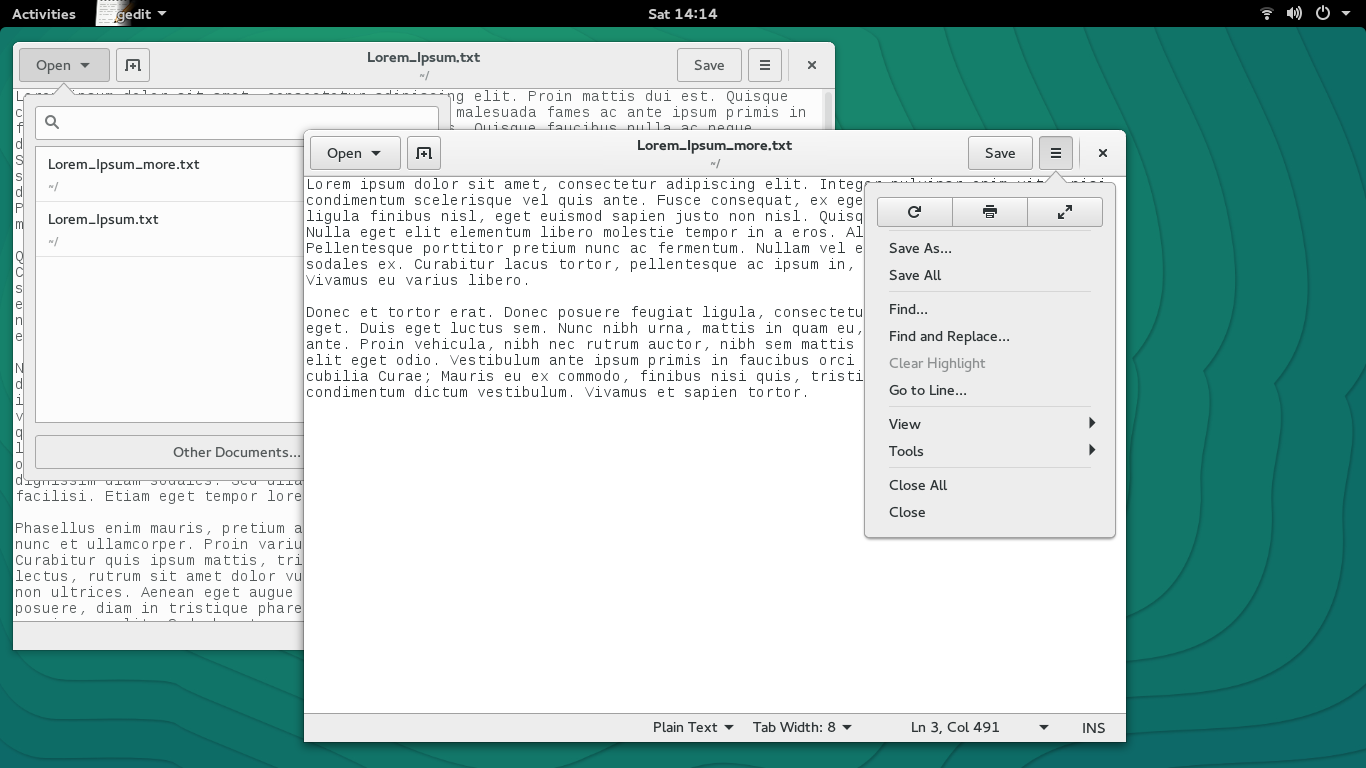 GEdit has a brand new look making use of latest GTK+ technologies including the header-bar and an intuitive pop-over based “Open” button that makes opening recent documents really convenient. It keeps all its power and features from previous versions but packs everything into a beautiful compact interface.

In addition, the application Notes makes it easy to take quick notes without the fuss of having explicitly save a text file for the purpose. It shows all your notes in a convenient easy-to-navigate interface so that you don’t ever have the trouble of searching for where you saved the text file in your file system. 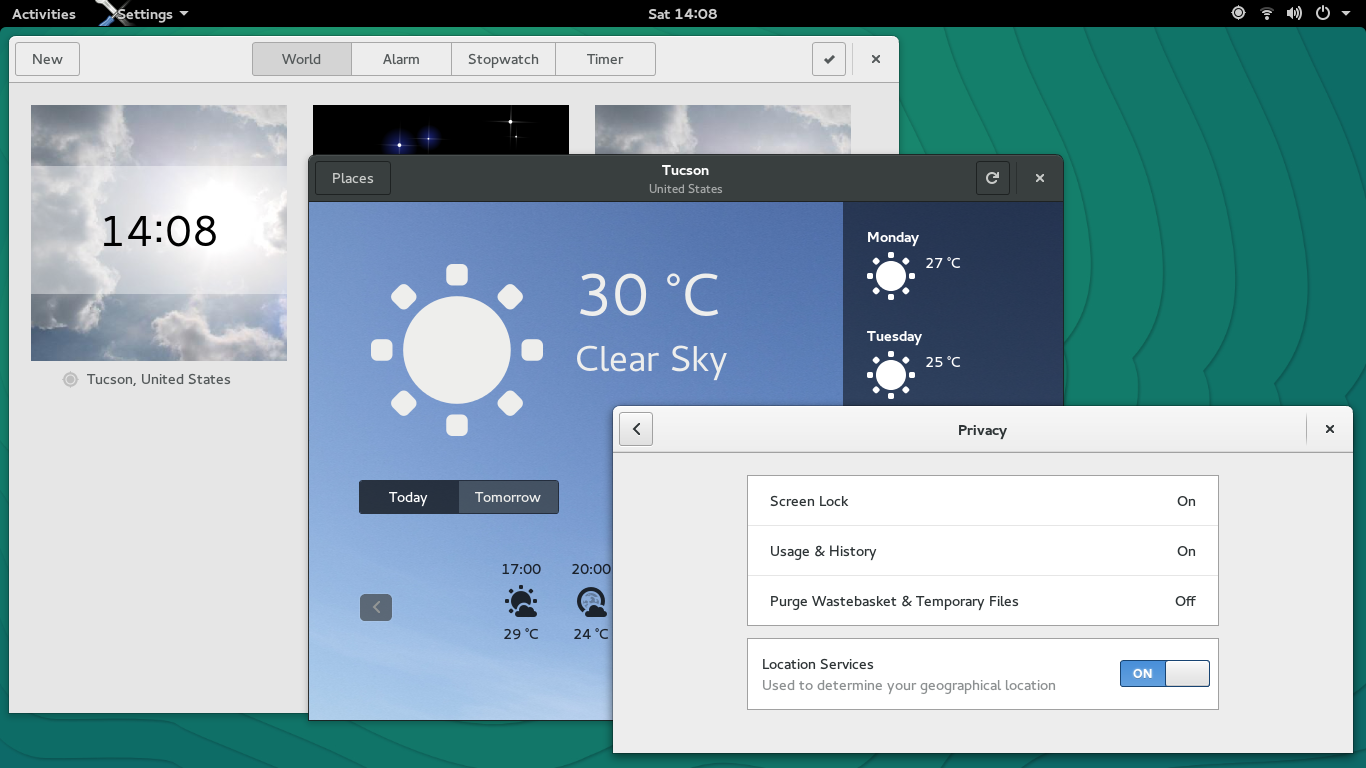 Applications such as Clocks, Weather and Maps have picked up geolocation support by default, automatically detecting your present location and presenting relevant information. When you start up, for example, Clocks now, it defaults to showing the time in your current timezone, where previously you would have had to add your city manually to the list of clocks to make this happen. Same goes with Maps, which defaults to showing your present location when you start it up. Concerned about privacy? Just turn it off from Privacy Settings! Speaking of maps… 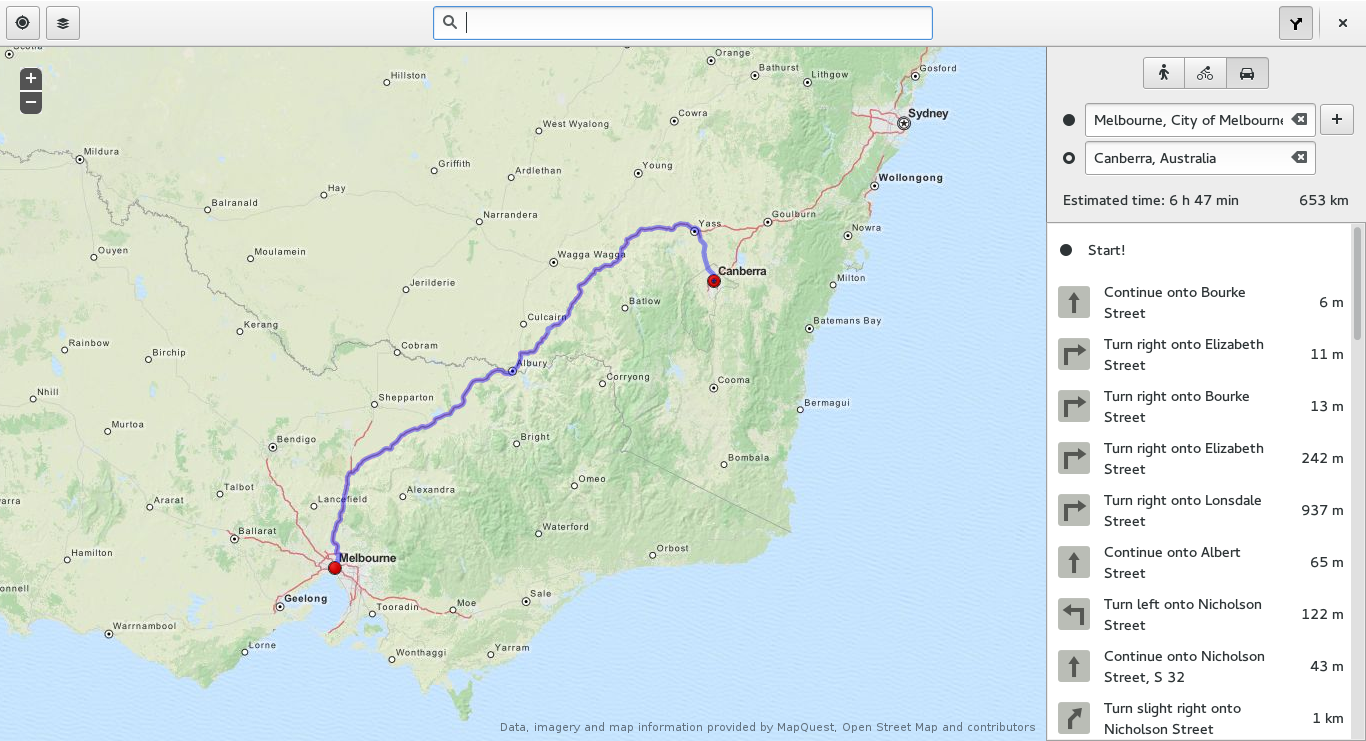 Maps (available at version 3.14.1) has also undergone much work since the version in the previous openSUSErelease, where it was only available as a technical preview. It has since stabilised and now forms a key component of the GNOME experience. It has also gained a handful of nifty features, most notably being able to show directions for travel and the ability to switch between the default map view and a satellite overview. 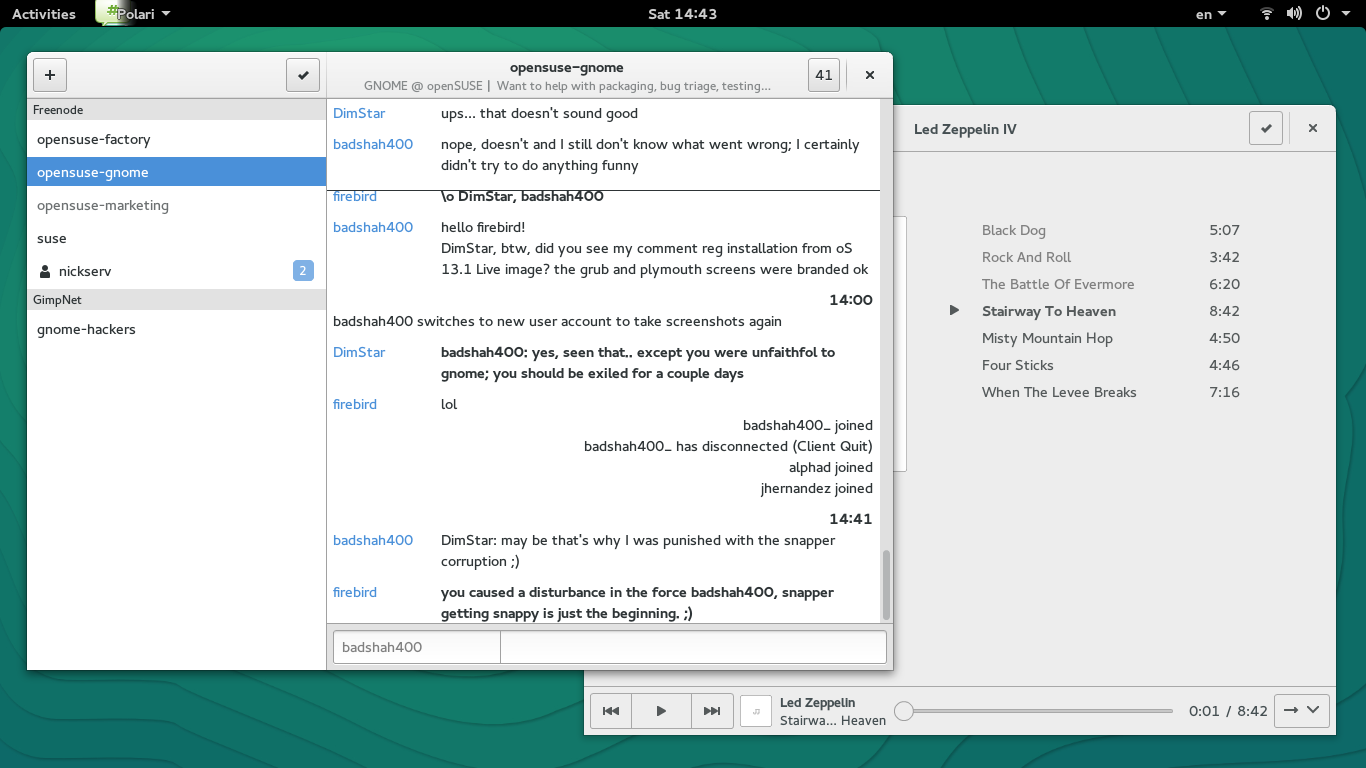 openSUSE 13.2 switches to default applications that fit in with GNOME 3’s vision toward providing a consistent, modern desktop experience. Gnome-music becomes the default music organizer and player replacing Rhythmbox used in previous versions. To have your music catalogued by this new application, simply put your favourite music files in the Music directory inside your home directory. 13.2 also introduces Polari, a beautiful modern IRC chat client, which takes over as the default instead of xchat.

Both xchat and rhythmbox are still available for installation from the default repositories for fans of these applications.

In addition, the visual theme in GNOME has been much enhanced by virtue of careful attention to detail and the reworking of several of its components. Animated transitions in applications such as Weather, GEdit and others make everyday work a pleasure. Enhanced HiDPI support ensures the desktop and applications look just as great even if you are working on that high-resolution screen of your oh-so new (and expensive!) computer.

Much has been done to make the desktop transition from the login screen faster and smoother, and a lot of work has gone on to improve the memory usage of the shell and several core applications, making sure that its 3.14 incarnation provides GNOME’s most smart, snappy, lean and productive experience ever.