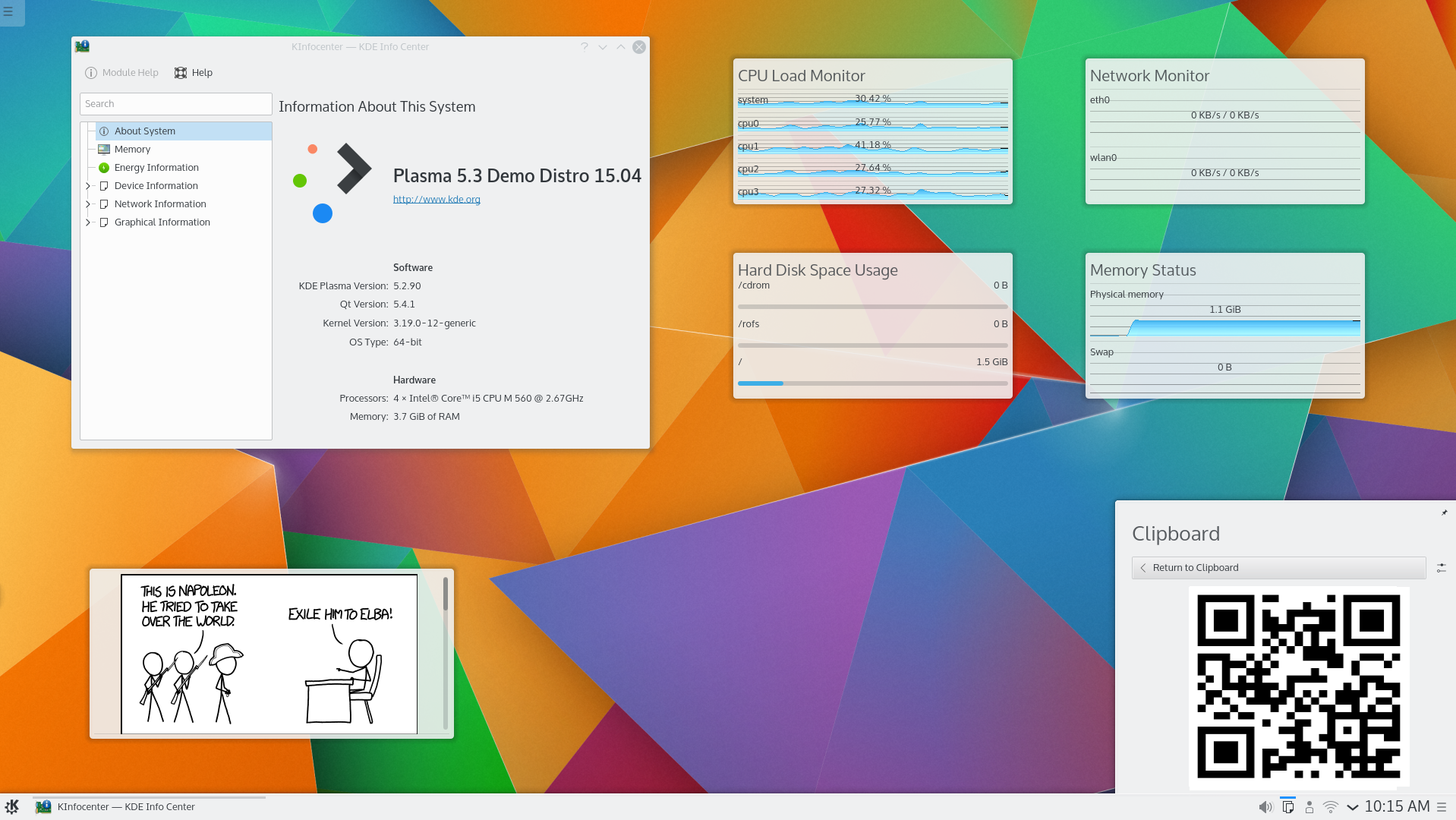 The latest and greatest desktop tech from the KDE community[/caption]

At the time of writing this, the openQA servers were busily running tests and, by the time we publish this article, they should be done. What was being tested? A massive amount of changes, bringing not only the latest Plasma 5.3 and Applications 15.04.1 to Tumbleweed, but also marking the switch to Plasma 5 as the default desktop!

Some of the biggest improvements in Plasma Desktop include much improved power management and widget handling. New are a touchpad configuration module, Comic widget and some system monitoring applets and improvements to plasma widgets like Clipboard, Recent Documents.

There were improvements in no less than 109 of the KDE Applications and its underlying libraries over the last 4 months:

The massive list of improvements to existing KDE applications are detailed on this page.

Of course, this is just a taste of the changes you will notice compared to Plasma 5.2 and the release of the KDE Applications from December last year. Those who have not had the pleasure of experimenting with Plasma 5 will be delighted with improvements all over this well-designed workspace. Ranging from smoother animations to smarter behavior permeating almost all aspects of handling day-to-day tasks, Plasma 5 offers a more modern and optimized experience.

The packages being made available today include a switch to Plasma 5 as default desktop. The openSUSE KDE team deems this release stable for day-to-day usage and a considerable step up from the Plasma 4.x series. While the KDE community continues to maintain the 4.x series for a few more months, by the end of this year, all efforts will be directed toward the Plasma 5 series. Applications are porting in a swift manner with even the KDE PIM team eyeballing a Frameworks 5 release around August and half of the KDE Applications are now Frameworks 5 based.

This move will have an impact on current Tumbleweed users! The patterns have changed, and if you have the KDE Applications pattern installed, it will begin to pull in the Frameworks 5 based applications. And of course, if you currently use the KDE workspace you will migrate from Plasma 4.11 to 5.3 - giving you the newest, latest and best of Desktop Linux!

Note that the first time you log in or start new apps, many of them will go through migration steps to adapt the configuration to the new Frameworks 5 version.

With the accelerated development in the KDE camp, delivering more incremental and better releases faster to its users, Tumbleweed is proving to be an excellent platform for users to benefit from the latest and greatest the Linux Desktop has to offer. If you’re interested in moving to Tumbleweed, check out the Tumbleweed portal and specifically the installation instructions.