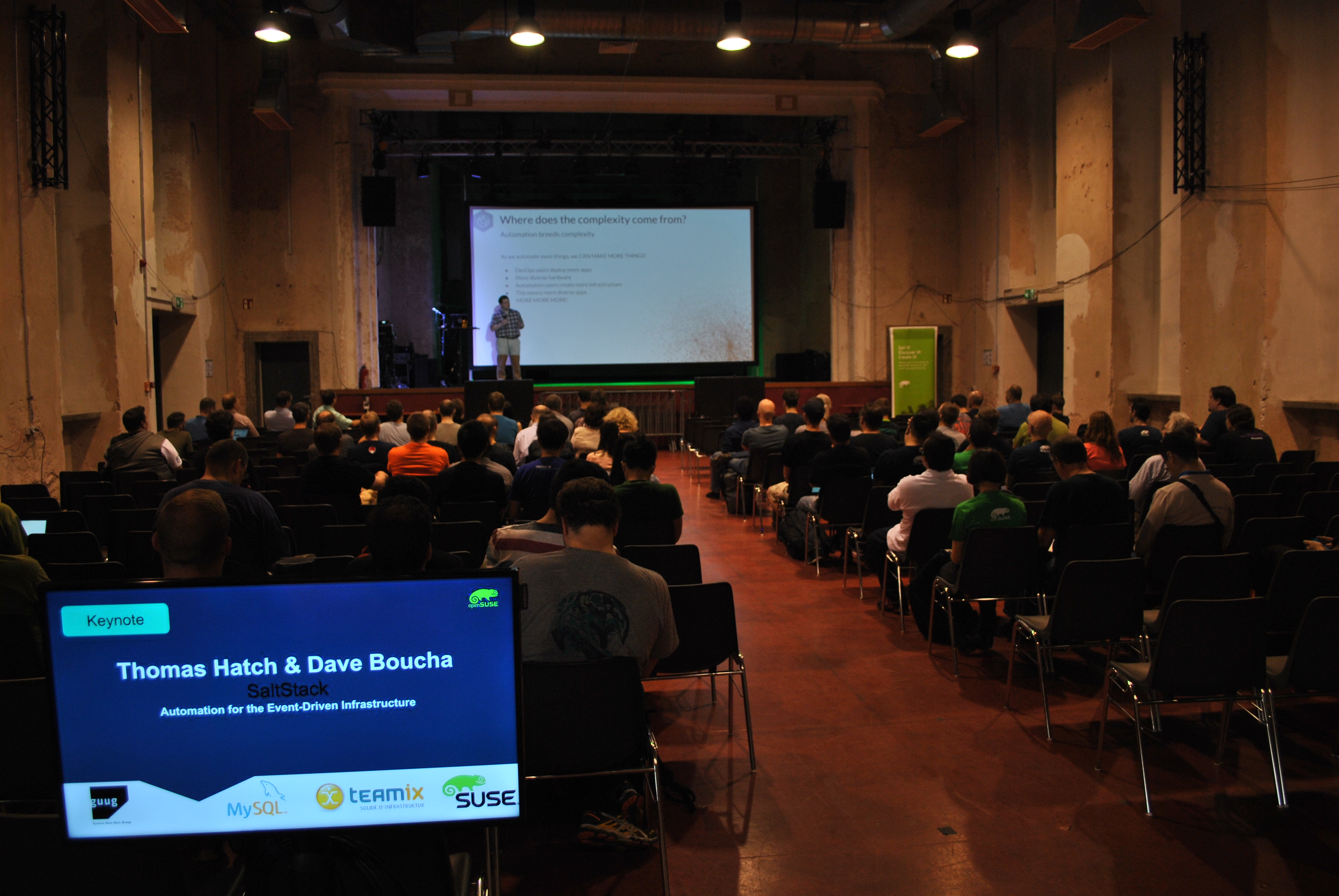 SaltStack Chief Technical Officer and technical founder Thomas Hatch talks about the evolution of Salt and IT automation at the openSUSE Conference on June 22.[/caption]

The first day of this year’s openSUSE Conference went well and the  keynote speaker team of SaltStack Chief Technical Officer and technical founder Thomas Hatch along with Senior SaltStack Engineer David Boucha and SUSE’s Joe Werner showed how powerful Salt is for IT automation.

Boucha gave a live demo and Hatch talked about the evolution of Salt and even talked a little about Salt’s Thorium Reactor, which was added to Salt as an experimental feature in the 2016.3.0 release. Werner discussed how SUSE uses Salt with SUSE Manager.

Frank Sundermeyer, from SUSE’s Documentation Team, gave his impressions of the first day of the conference and details a litte more information about Salt in this blog entry.

The SaltStack Summit was standing room only and the talks will be available in the next few weeks for those who are interested is seeing all the convincing arguments for why developers should use Salt for automation.

Kristoffer Grönlund talked about Rust during his talk at the SUSE Labs Summit and recommend to developers to consider writing new developments in Rust as the programming language continues to evolve.

Alberto Planas provided an overview of the the amount of people using openSUSE as well as how people install and update to new openSUSE releases. Most people were installing X86_64 was the highest architecture through a DVD and Germany makes up the country with the most use of openSUSE.

openSUSE’s new release manager Ludwig Nussel provided an overview of the next release Leap 42.2. The Alpha 2 was released yesterday and Nussel provided a schedule of the release of 42.2. There are currently 900 packages from the SUSE Linux Enterprise 12 Service Pack 2 that will be going into Leap 42.2.

Closing out the day, Max Lin is talking about staging in openSUSE Factory.

Tomorrow, there will be two keynote speakers. Frank Karlitschek, the founder of Nextcloud and former co-founder of ownCloud, will provide a keynote at 10 a.m. tomorrow. Georg Greve, CEO of Kolab Systems AG, will have a keynote in the afternoon.

Those who are not able to make the openSUSE Conference can watch it live via stream at https://streaming.media.ccc.de/osc16