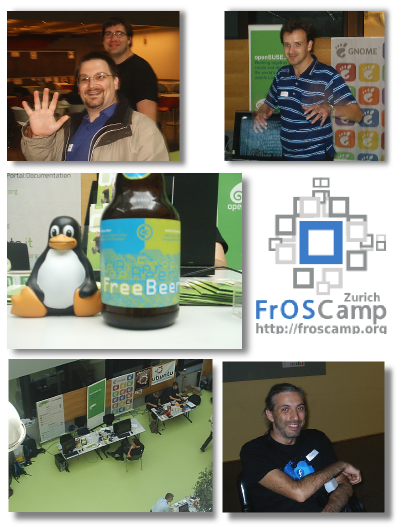 Last week our Ambassadors did what they do every week: promote openSUSE. They went to meetings, conferences and tradeshows for a talk or staffing a booth. And they organized meetings, gave students lessons in using openSUSE, handed out DVD’s and valuable knowledge.

Many visitors of this site have no idea how active our ambassadors really are. The amount of work they do is amazing and they deserve a bit more of a spotlight on what they do! Their reports are usually highlighted in our weekly news, be sure to check their work out each week.

Read on for a short selection of reports which came in over the last week by the openSUSE ambassadors. And note that we get reports like this almost every day! Some come in the form of text, others like this one by Bruno about attending FrOSCamp 2010 in Zürich are in the form of a nice presentation (very much worth a look).

We were at Technograil - a national level technical symposium happening on the 18th and 19th of September. during the event we presented some sessions on OpenSource Technologies, Importance, Methodologies, Sources, Market Trends and so-on during the events, requested comments, and also presented few prizes to during some contests. In my role as an Ambassador for openSUSE, I presented few sessions on the importance of openSource and About openSUSE and distributed many of DVD’s of openSUSE 11.3 32 & 64 bit. I also presented DVD’s for Staff and Lab Administrators. 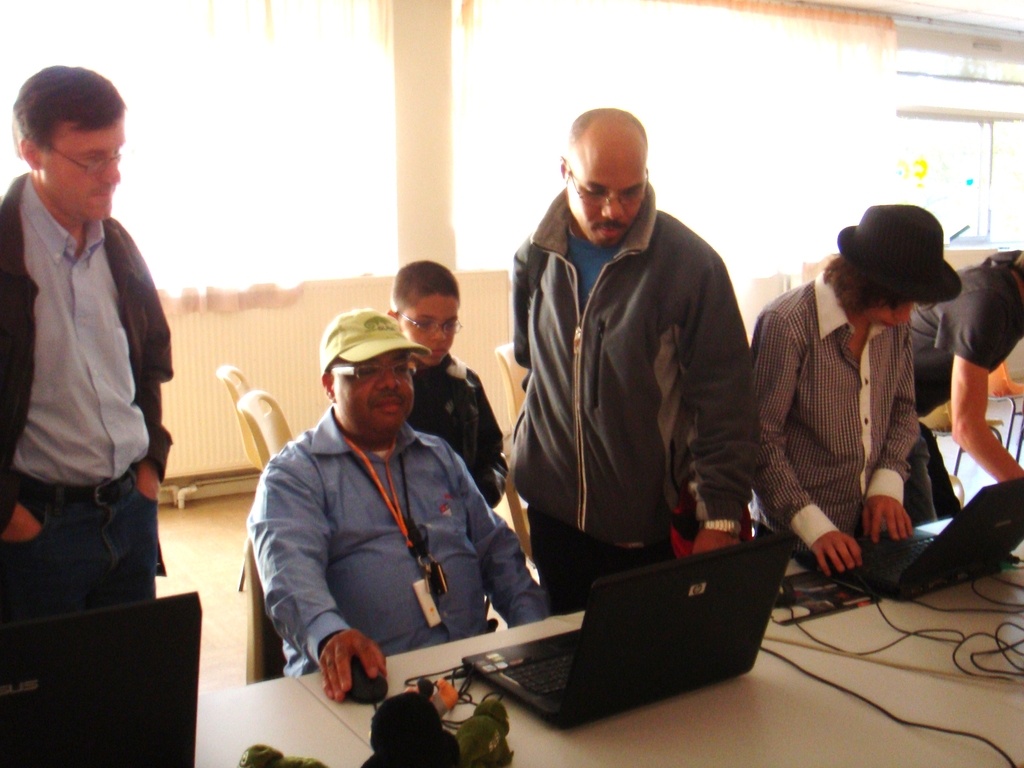 In the Rouen City Associations House a France Software Freedom Day was held. The France ambassadors used contacts at newspapers like Rouen Magazine, national radio (RGL and France Blue and the LUGS in Fance, forums, mailinglists and other venues to spread the word about Software Freedom Day. Here is the report.

We were overwhelmed by the visitors. We distributed 211 openSUSE 11.3 DVDs to the casual visitors and a few SUSE 11 SP1 to people from the Ministry of Education. We started sfd with demonstration of CMS, we showed fresh installation and tweaking of software from opensourcecms.com This took a couple of hours because the process was challenging and over a wireless link sometimes failing at 2mb.

After the Coffee break we demonstrated FOSS games. The audience was quite interested to hear that you could use Linux to work but also to play games and that some of those games are “clones” of Windows games. We gave some advice on using Wine, but demonstrated that installation of openSUSE 11.3 alongside with Windows would be their best bet. We showed how to install openSUSE 11.3 on a particular laptop. There were a few challenges. Some people deeply anchored into Ubuntu and Debian were a bit cold on doing the big move! One guy even came with his laptop loaded with CentOS not to nag us but to ask advice on wireless. I showed him how easy we were connected with 5 brands of laptops (Asus, HP, Packard bell, Compaq) with wireless. He will give openSUSE a try!

We had our usual visitors and fans and in particular someone from the local Chess Club. He wanted to interface his Chess board with a Linux box. Well, if any of you has some ideas.. We had a debate on Gnome and KDE 4. This does drain your brains because it’s like preferring thee with sugar or just plain - to each his own.

Wikimedia France was there and gave a lecture on wikis, that was interesting, I did learn a few things as well. We showed the wiki of softwarefreedomday.org and we were the only LUG in France doing something. We finished the day with practical labs on openSSH, mRemote, Xen, blogs (mainly WP), CSS. Each visitor was given a pen to write our email down and then they could keep it! What a pity, no pens left, not even for me!

We ran out of battery for our camera so here are the pics we secured. We are now getting ready for the next action on 16th October, 2010.

Chuck send in a report about the events attended over the last year by some of the USA ambassadors, highlighting three events:

For ALF, I took 400 DVD (openSUSE 11.1) and about 100 Linux Format Magazines with DVD (openSUSE 11.0). I gave out all the magazines and 350 DVDs and gave the rest out later at the local linux group. We had T-Shirts, Tuxs, and Geekos. I manned the table for the most part by myself, James Taylor helped me out when I gave my talk about openSUSE Community. I made a CD Rom that I handed out. Find some slides here: here

The talk that I gave on the openSUSE Community went well, a lot people were surprise at all the stuff we have to offer (Build Service, SUSE Studio, Factory, and openSUSE Li-f-e). The SUSE Studio seems to really impress a lot of people. Tons of questions, tons of comments from people says they use openSUSE, or that they will give it a try. The magazine from LinuxPro with the Live Disc was a hit. By the way, one thing that amazed me was meeting a guy from Turkey who had been using openSUSE and was surprises to see us at this Fest.

The Fedora Ambassador were there and were impressed with us - and even wanted to help us out. They introduced me to Dave Yates of Lotta Linux Links Podcast, who wanted to talked to me about the Ambassador program. Also a few people that were from other parts of the country asking me how to become Ambasssador because they too want to go out spread the word on openSUSE.

I met Katina Ferguson and husband from from Foss threads, everyone needs to check them out. Their business makes T-Shirts for the open source community. What really impressed me about them was they use openSUSE, inkscape, and GIMP to create their shirts. So it was a great fest!

In between handling out stuff. I answer a lot question about openSUSE. Here are the most poplar questions that were asked…

A quick summary of other questions: What is open Li-f-e, Autoyast vs. Spacewalk, drivers for media, and can you help with NV Drivers.

This was the first Texas Linux Fest and the folks did a great job. When the event was over, I went to dinner with folks from IBM, Webmin, and TLF. Next year if I get to go back, we are talking about doing a birds of the feathers for openSUSE users. I have posted some photos on my facebook page and I will be adding a video shortly that a summary of the day. I would like to note that I am ready to go next year and have reached out to help the guys with the Fest!

Southeast Linux Fest I like to first thank James Mason for the 11.2 DVD, Poster, Zypper Cheat, and Jon Regan for 11.2 DVD he had. Moreover, the Novell Team in Atlanta for the SUSE Enterprise Linux DVDs and Yancy Smith for the help.

The event was great. Because of the small number of 11.2 DVDs, I had burn a number of DVDs and CDs myself. These were openSUSE-Edu Li-f-e(Linux for Education), openSUSE Gnome Live CD (32bit and 64bit), and the openSUSE 11.2 DVD. I had three laptops with me. One was running a set of slides about the openSUSE Community, highlighting the Build Service and SUSE Studio. The second laptop ran openSUSE 11.2. The third running openSUSE 11.3 Milestone 7. I also made about 300 copies of the Zypper Cheat sheet that James sent me and a VIM Cheat Sheet, The One Page Linux Command Sheet and a sheet that I create for openSUSE with basic commands.

I boot openSUSE Li-f-e up on one laptop to let a couple of teachers play with it. They really love the LTSP and how we had our apps laid out. One of the top questions that was asked a lot was, “What makes SUSE stand out above other distributions?”

I had got to help one user who was having issue with the video drivers. He had a Nvidia Card that wouldn’t load correctly. He was really upset about it, so I showed him on one of my laptops how to use VESA setting, making him very happy. I got a lot of great comments from people who had been using openSUSE since such and such version and was really surprised to see the openSUSE Gnome Live CD with the 11.3 milestone go so quick. At one point I had to burn more.

One a sadder note, people keep asking me where the Tuxes were and Geekoes. I had two Geekos, that I gave to people that asked me if they could test drive openSUSE on my laptops. Oh, I would like to say thanks for the Geekos I got, they are very different than the ones we have here in the states and people notice. They Love Them!

I am surely planning to help out next with Southeast Linux! 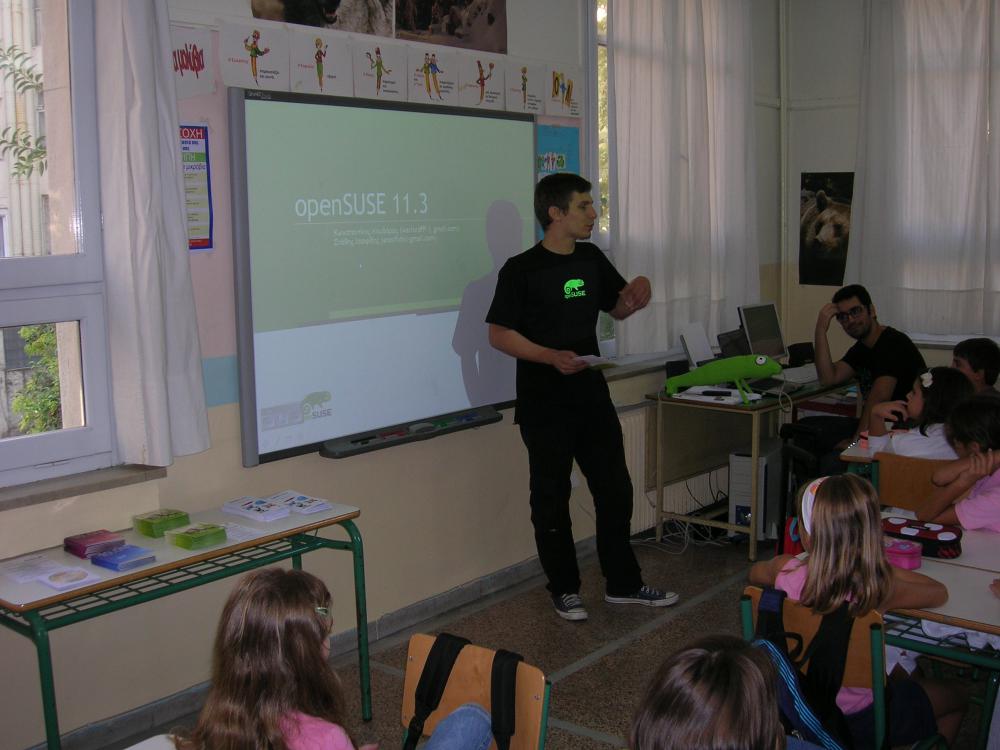 The openSUSE ambassadors team in association with GreekLUG and the Scouts Organization in Thessaloniki, participated from 11th until 19th of September 2010, at the 75th International Trade Fair in Thessaloniki. We were at the thematic section called Kids & Fun at the building no16.

The main idea there was to organize some games for the kids. Unfortunately we didn’t have the equipment to install couple of games (like Super Tux). So we had a small corner and we were informing the kids and parents about FOSS and what are the positives of using it. We used our laptops to show a small demo. Efstathios Iosifidis provided PromoDVDs, stickers and also a brochure with Greek Help. We gave away around 500 DVDs, some 100 stickers and many brochures.

We couldn’t count the people that passed by but the main question from kids were about the games, facebook, Internet games and the questions from parents were how they can have have safer web surfing and how they can make their kids to use the Internet less…

Many thanks to Isaac Amaru Zelaya Orellana for the writing on this!

If you want to join these efforts, make a difference and have fun doing it, head to the Ambassadors Portal. Be sure to read the FAQ to find some suggestions on what to do!