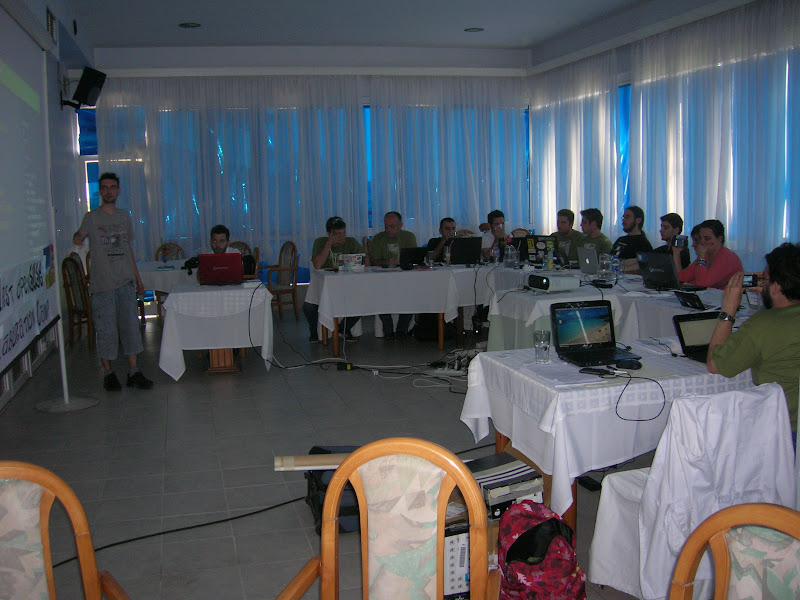 From Friday the 15th to Sunday the 17th of July Lizards and other FOSS enthusiasts were gathered at Katerini for the 1st Greek openSUSE Collaboration Summer weekend Camp. The whole event started at the Hotel pool where all met before the actual beginning of the event . After everybody that was expected came, the talks started. Fridays talks were more related to the openSUSE local community. Efstathios Iosifidis and Kostas Koudaras presented Lokalize and gtranslator and show people how useful tool those are. Efstathios Agrapidis along with Stella Rouzi presented how you can help the community by translating the openSUSE weekly news. 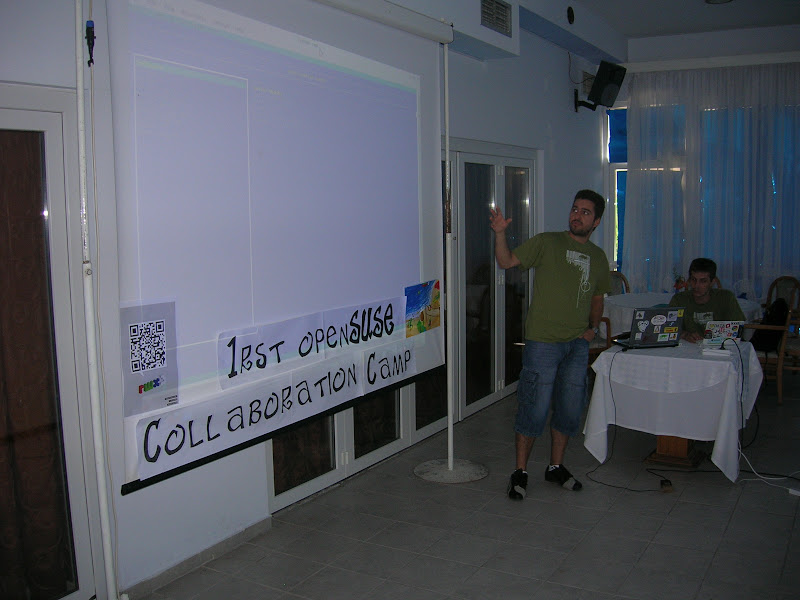 After a dinner break from 19:30 to 20:30 there was a Translation contest. The original plans were on letting people translating some wiki articles in a certain time but since people were enthusiast about Lokalize and gtranslator the program Committee  decided to change it and give people .po files to translate. The contest should normally last one and a half hour total but everybody asked for more time to do more work, so   Diomidis Anadiotis talk ‘I am new to the community’ was postponed and the contest lasted until midnight. During the contest 20 applications were translated from English to Greece.

The program was made lose so that people had the opportunity to physically collaborate, it was considered more important for the people to have fun working as a community than actually have a tight schedule and this actually worked perfect through the weekend. After all the hard work of the first day, people wore their bathing-suits and went to the Hotel’s pool party where they had tons of fun. People there had  beers, conversations about FOSS, late night pool games. The last of them actually left the party after 4:00. Once again it was proven that FOSS is tightly connected with fun. 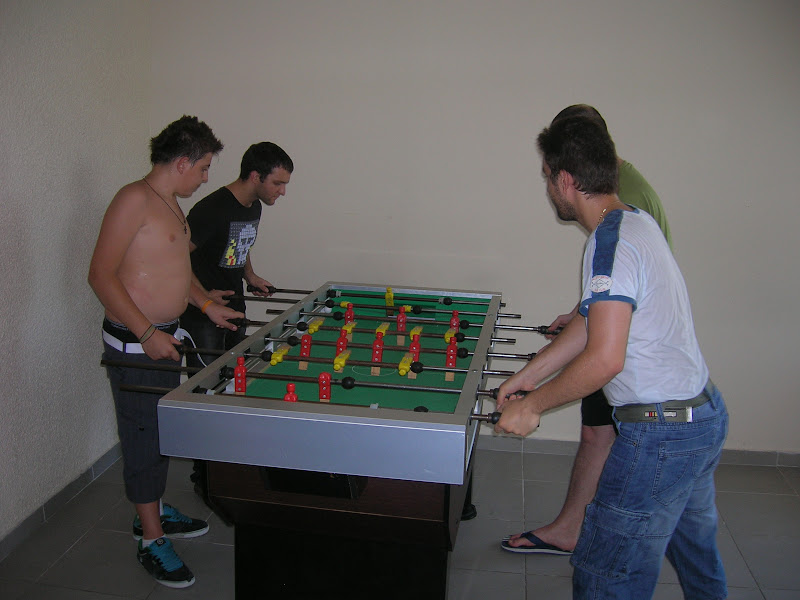 At Saturday there was an early wake around 8:30 for breakfast and around 10:15 the program started with the announcement of the previous night’s contest where Diomidis Anadiotis won the Geeko plush reward. The First presentation of the day was ‘Using Yast - System management: easy, fast and with many options’ where Efstatios Agrapidis and Kostas Koudaras presented how and why to use YaST more.    The day continued with Theo Chatzimichos from the Gentoo community presenting Django and making a tutorial of how and why to use it. After that Stavros Kalapothas and Efstathios Hatzikiriakidis from The-Hackerspace presented ‘Security and arduino: Multifactor authentication system (voice recognition and RFID technologies)’ which was a four hour workshop with a short break. 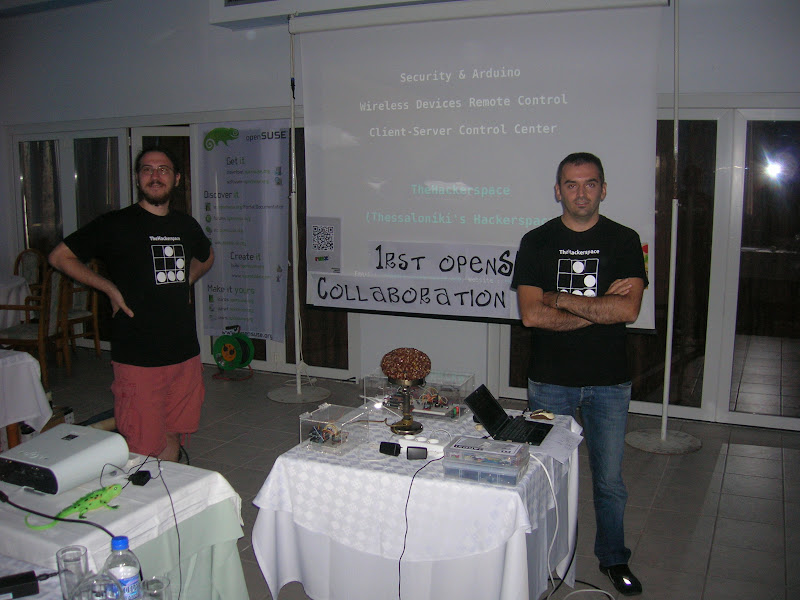 After the workshop, at around 15:00 there was  long break where once again there were great  FOSS conversations among cold beer, water-gun fights, pool volley and other water sports… Some people though preferred to take a nap since last nights sleep was not enough for them.

At around 17:30 the program started again with ‘Qt Signals And Slots’ from Antonis Tsapaliokas from KDE and continued with another workshop from the people of The-Hackerspace titled ‘Security and arduino: Wireless devices remote control (client - server control center)’. There was a dinner break and then continued with a ‘Vim introduction’ by Yannis Chatzimichos which was really interesting and showed people why Vim is better than other editors. After that there was the previous days scheduled talk from Diomidis Anidiotis titled ‘I’m new in the community’ where he talked about how new people to a FOSS community feel entering a community. It was a great feedback for all and this lead to the next and last planned conversation for the day which was ‘Collaborating inside a FOSS community’, where all people expressed their opinion about how people should do that. Many valuable conclusions were made there. Of course once again people went to the pool-bar afterward and continued the conversation there. 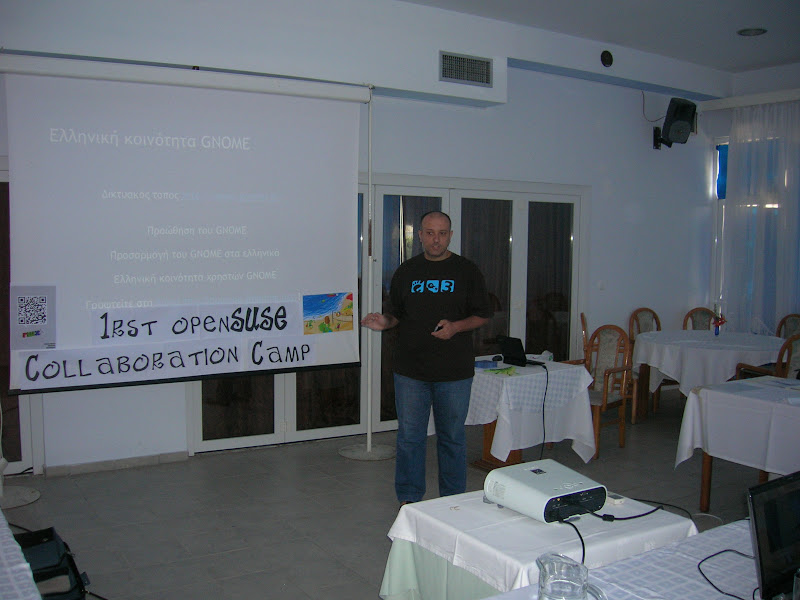 Sunday was the last day and it started around 10:00 after breakfast with the Gnome community and Efstathios Iosifidis presenting ‘Surviving with Gnome 3 in a KDE-world’. Efstathios Agrapidis took up the baton presenting ‘I’m OBS-ing, are you OBS-ing too?’. Unfortunately there were some internet issues so instead of the OBS workshop, after the OBS presentation we had Theo Chatzimichos (due to popular demand) continuing the workshop on Django. After that came George Tsapaliokas presenting ‘KDE Frameworks’ and how to work with them. The day finished with a talk from Athanasios-Ilias Rousinopoulos titled ‘openSUSE Medical project’ where as the new project leader he talked to us about it and why we should all help this project.

As you can see from the photos, the event was a success as it reached its goal providing education through presentations, workshops and discussions, all that through summer entertainment.

Most important, all participants are impatiently looking forward to the next event! Soon the videos of the workshops and talks will be available at YouTube, stay tuned…

Special Thanks to Giorgos Tsapaliokas and Stella Rouzi for helping more from all on organizing the whole event. Also the Greek openSUSE community really wants to thank the people from Gentoo, KDE, The-Hackerspace and Yannis Chatzimichos for participating at the event with their valuable and really interesting presentations and workshops. 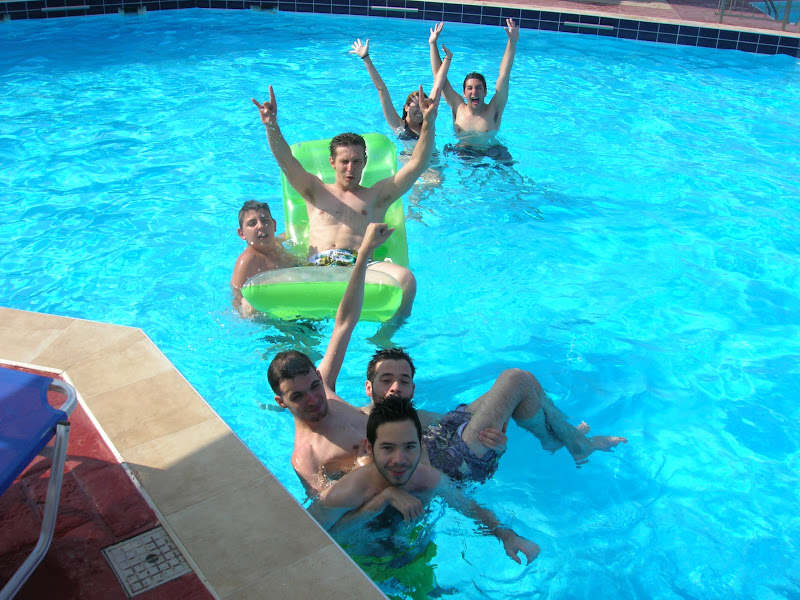