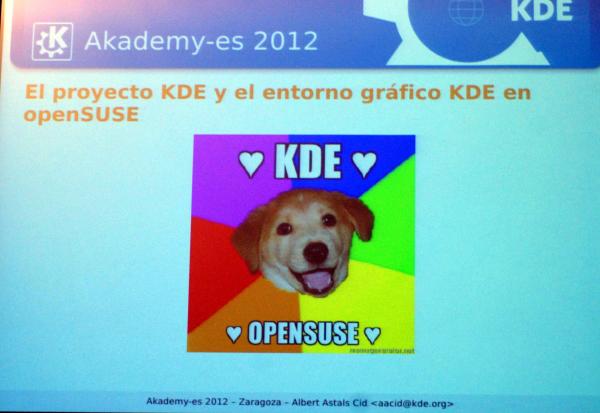 Akademy ES is the yearly meeting of KDE developers and users in Spain. It is organized by the KDE Spain Association, and started in 2008. This year the event was organized in collaboration with the Clúster de Entidades Pro Software Libre de Aragón, the Zaragoza Council and the Fundación Zaragoza Ciudad del Conocimiento. Akademy ES took place during the 18th, 19th and 20th of May 2012. Of course, openSUSE was there with a number of talks! Read on for a report on the event from our ambassador, Rousinopoulos Athanasios-Ilias. 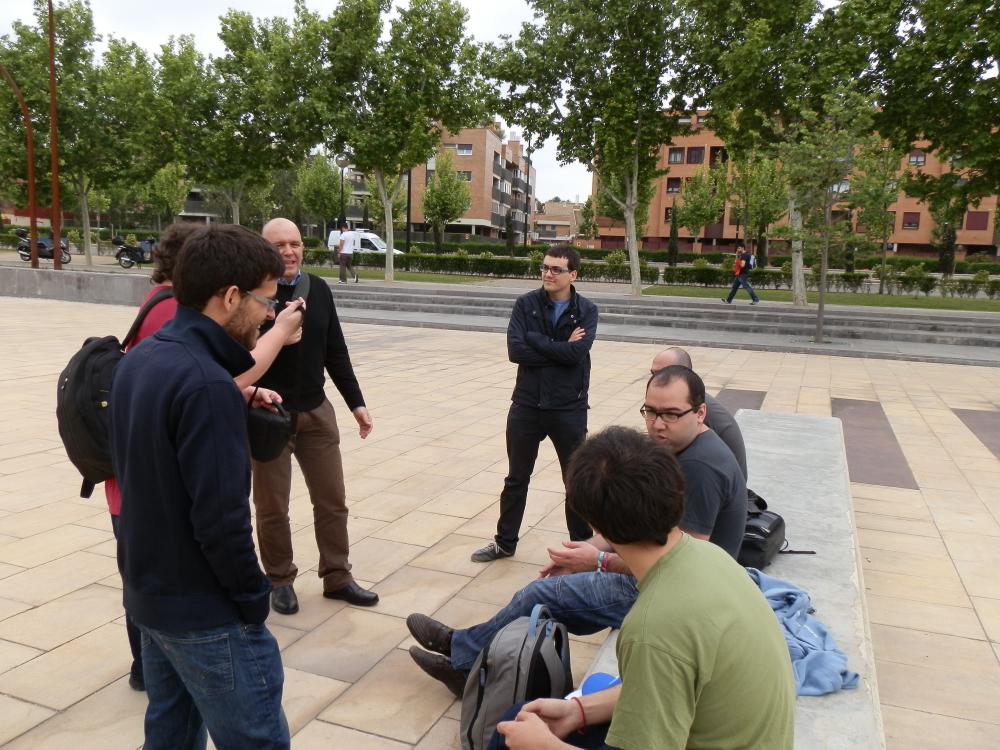 Meeting in front of building[/caption]

The first day begun when we met up in front of the Zaragoza Council where Akademy Es took place. Once inside we set up our booths. openSUSE had a booth during the whole event, as did KDE itself. Setting up the booths took a while and afterwards it was already lunch time. There were pleasant discussions during lunch and when we came back, the conference was about to start!

Akademy ES started with the “Opening Ceremony” and then Albert Astals made an “pre-summary” for Akademy ES 2012. He presented the Akademy program and commented on some of the tracks and sessions. Then Paul Brown from Linux Magazine gave a presentation titled “Free Software, What is it, how does it work , why do you find it interesting – KDE Remix” I admit that was an interesting presentation. Although most of the time I was standing to the booth, I was able to listen :). After the break, Agustín Benito talked about “New KDE features for business usage”

KDE is being used not only as a home user desktop and on a variety of private mobile devices but also powers a large number of business systems. Quite a number of smaller and larger companies has build a business around KDE software, be it shipping software for desktops and building Linux distributions to servicing and software development around or building upon KDE technologies. Augustin knows quite a number of these companies. He gave examples and discussed how KDE can do better helping those companies. Finally the first day of the Akademy finished with a very interesting presentation by Baltasar Ortega (an openSUSE fan!). Baltasar gave a presentation about “Plasma Active”, KDE’s touch shell build on the Plasma framework. Plasma Active shares the vast majority of code with the current desktop and netbook interfaces, which is why the team behind it has been able to build up something as polished and powerful in such a short time. Balthasar demoed “PA” and it is surely interesting stuff. 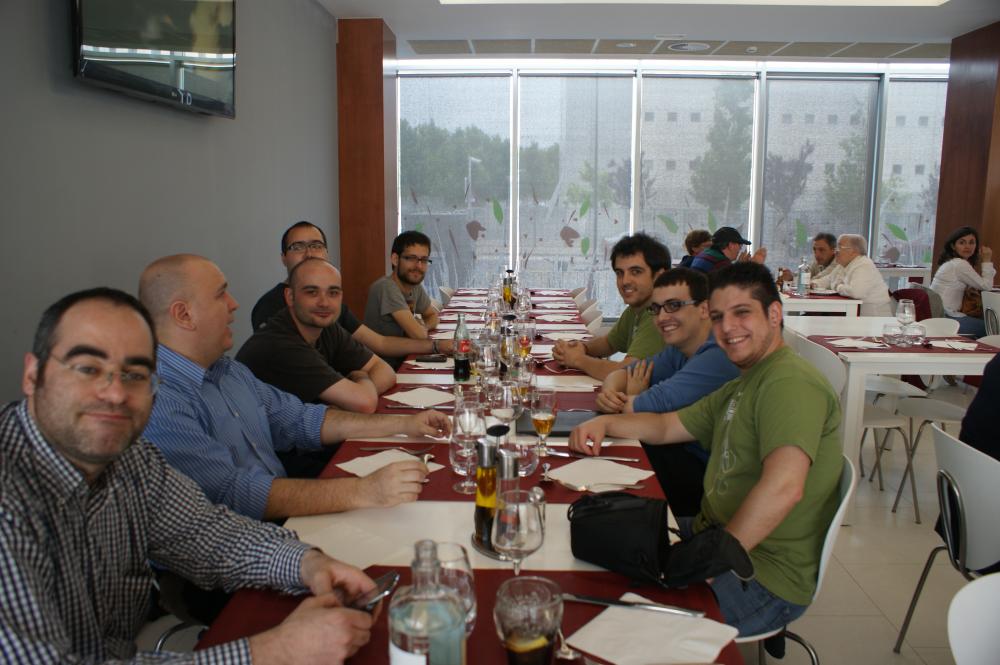 The second day of the Akademy took place in Fundación Zaragoza Ciudad del Conocimiento so I had to “re-install” the booth.

After that the first presentation took place. Jesús M. González Barahona [Professor on my Master Studies] , presented us with “Metric analysis of development: what we are able to learn”, an interesting session on source code metrics and what we can learn from analyzing our repository history and code.

After the presentation more people came into openSUSE booth asking for DVD’s and posters and asking questions about openSUSE Project and more information about the openSUSE Collaboration Summer Camp 2012 as well.

I also spoke about the summer camp event to Jesús M. González Barahona and Paul Brown.

As the second day had more presentations than the first one, let’s have a look at a few. As I was the only person on our booth during the Akademy , i had a “panoramic view” of the presentations all around me ;-)

In my opinion testing the source code is more than useful, the more tests you make the better is. Albert Astals made also an other presentation , but this time not alone. Aleix Pol and Albert Astals talked about the Qt Quick and then Alex Fiestas talked about “WebAccounts - Integrating the web on your desktop”. 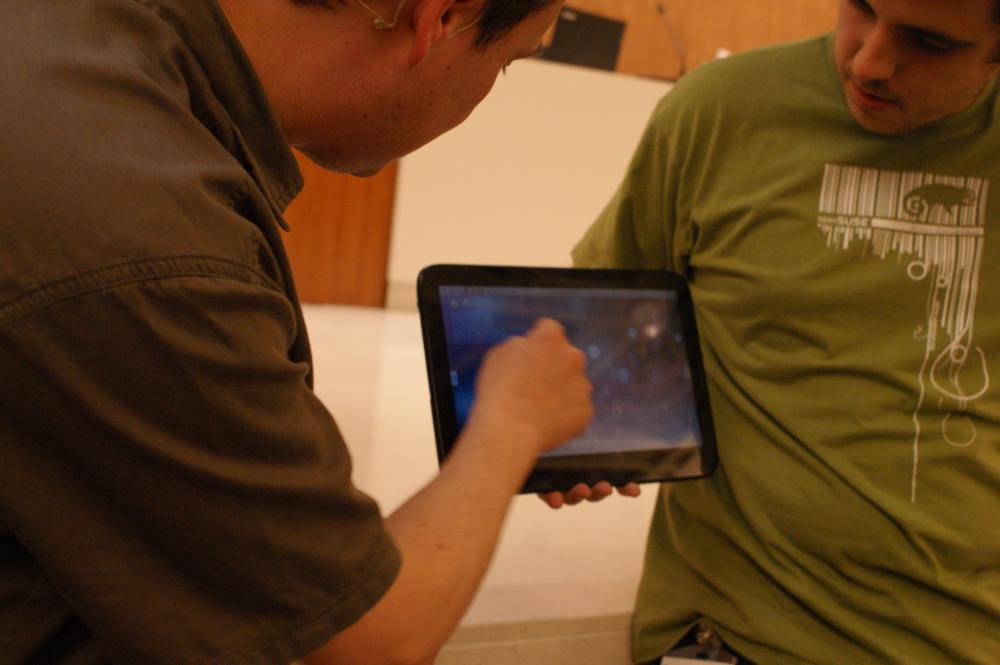 After Alex Fiestas’s talk it was again lunch time and after lunch the lightning talks took place. It was about 1 hour where people presented a variety of things in about 5-10 minutes. For me it was the right moment to give my pitch. So my lightning talk was “Dolphin Tips and Tricks @ opeSUSE”

After the lightning talks finished , Baltasar Ortega presented “KDE 4.8 for users”. KDE has many possibilities not everyone is aware off and Baltasar showed many trips and ticks on KDE 4.8 for openSUSE. When the Baltasar finished his presentation “My KDE moment” by Aleix Pol and Víctor Blázquez took place. After the group photo I presented the openSUSE Project to the crowd. As I participated in Akademy I focused more on KDE desktop @ openSUSE and mentioned that the KDE Community can participate in KDE Bug Team. Furthermore Iexplained and gave more information about YAST, OBS and mentioned that anyone in KDE is loved at openSUSE, no matter what distro you use! 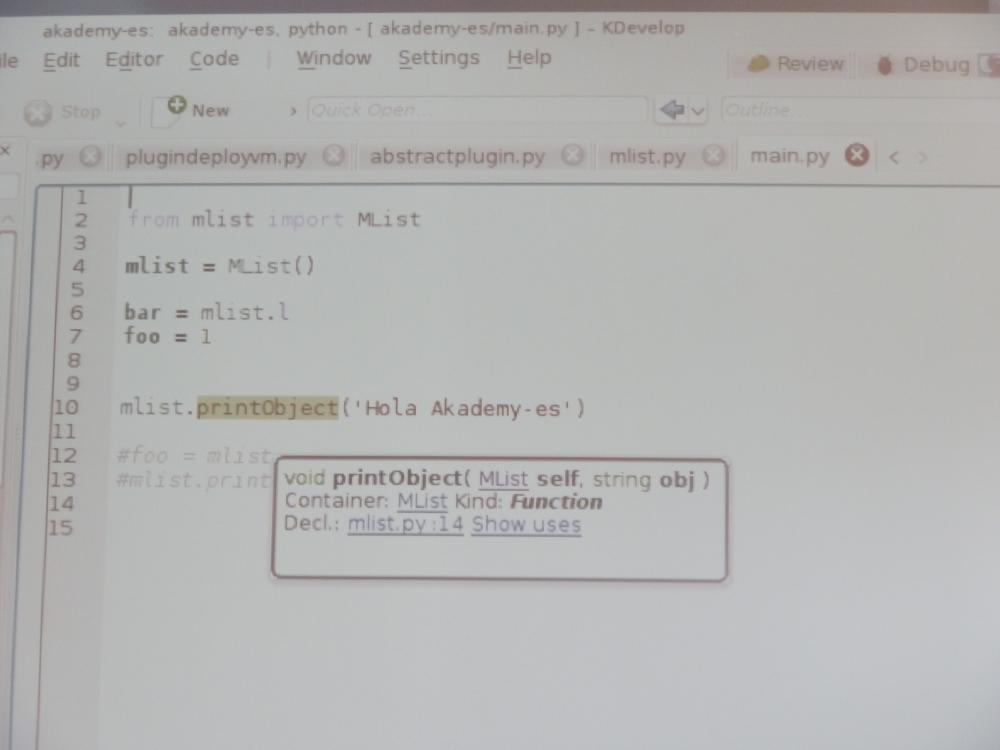 As usual, the idea of having once set of source code for building a variety of deb and rpm packages was of interest to many people. As I participate for this year in GSOC with openSUSE Project, I found very interesting the presentation by Agustín Benito about “KDE Connect”. KDE Connect is a project of KDE Community (suggested by Agustin) and it is “under construction”. As I work on openSUSE Connect, a part of our communication infrastructure, I’m wondering if there are possibilities to collaborate.

That was a busy second day of Akademy ES, more active than the first.

This is the last day of the Akademy. Sunday begun with “Qt5 and KDE Frameworks” by Alex Fiestas and Albert Astral. Then Hector García and Ángel Berlanas explained to us the “Extended Localization in QT “ and how it works. There was another Plasma Active presentation, this time showing the awesome Free tablet Vivaldi by Alex Pol. 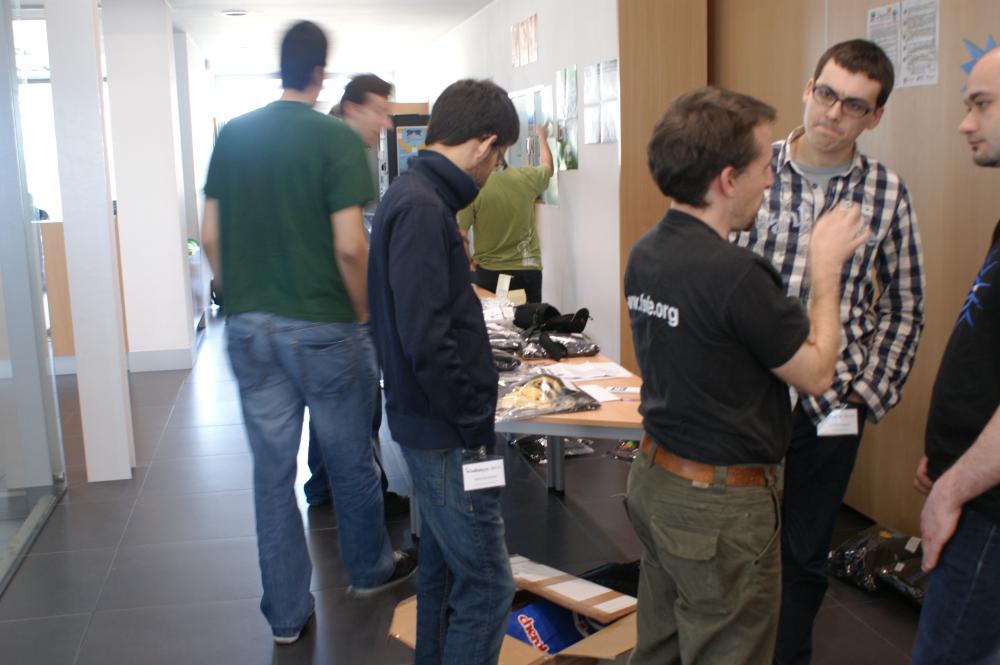 Furthermore the next presentation was very interesting as well , Alex Fiestas explained to us how Nepomuk works and what you can do with it. After Alex’s presentation the second part of “Lighting talks” begun. Like Saturday they lasted about an hour and many interesting presentations took place.

The last part of Akademy ES were the workshops. I had a very interesting conversation with other visitors about the use of YaST and how it helps users do ‘complicated’ things in an much more easy way.

Finally the GPUL (Group of Linux Users and Programmers) and Sugus Asociason of Sevilla took some DVD’s and Posters from the booth.

As a conclusion I would like to thank the organization committee , and Alex Fiestas (I used some of his photos) as well as the [openSUSE Travel Committee for sponsoring my trip.

Here is a video from the Akademy’s last day (during the lunch).

See you in the next Akademy ES!