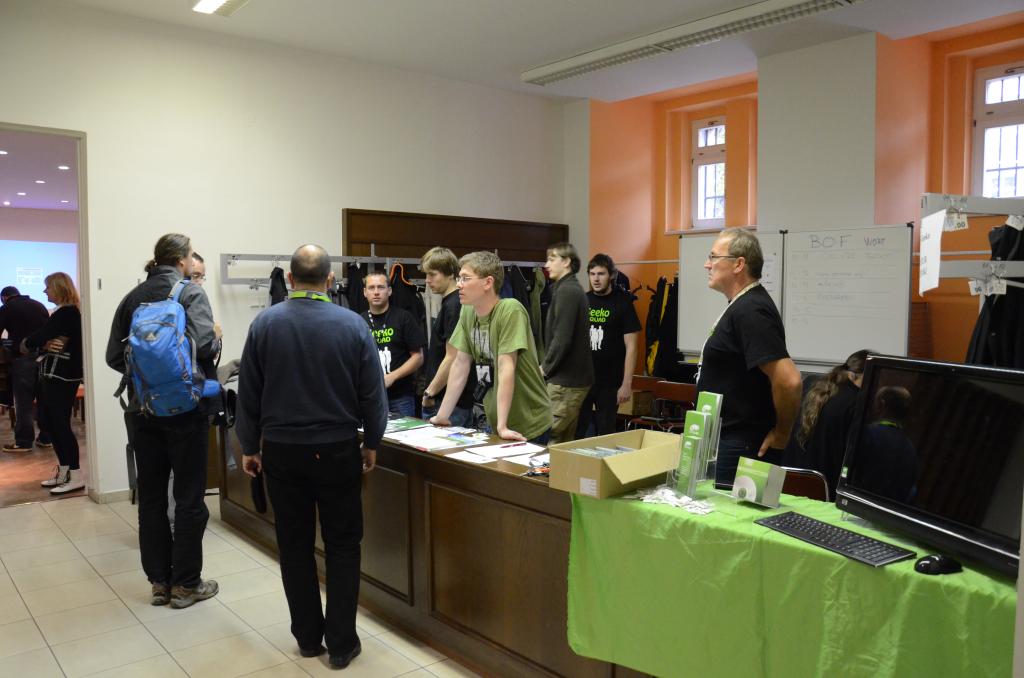 The third day schedule began gently at 10:00, with a few of the headaches that come with hosting an event in Prague. Yet, the atmosphere was enthusiastic and energized. Being among fellow geekos certainly helped the attitude: it’s more focused today, we’re talking Green! So, by the time it was 11:00, over 150 people were in sessions and another 50 or so hung out in the main areas behind their laptops, in discussion or eating and drinking in the café and bar..

The Masaryk building is quite different from the huge university we had yesterday. It is a former hotel many corners and a peculiar layout, making it hard sometimes to find the right room. There is a large entry area with benches to the side where people sit and talk - not hack as the wireless doesn’t extend into this common area. The rule of keeping the doors closed when a session has started was enforced quite a bit more than during the previous two days, resulting in less noisy and more focused sessions, not a bad thing. Another thing to notice is that, this also being a university building during the week, students and teachers are also using the building, especially in the main area. 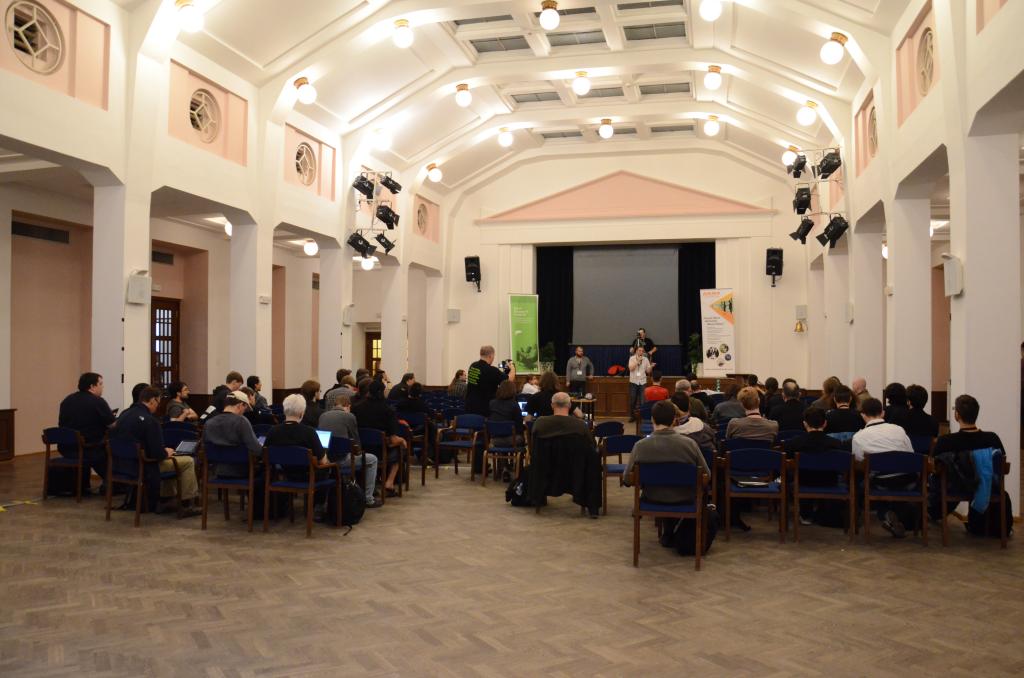 As yesterday, there is a number of talks, but unlike Saturday and Sunday, they are all about openSUSE. The opening talk in room ‘Picard’ by Joe Doupnick about a ready-to-go server system for charities was attended by over a hundred visitors. It was demonstrated how by using openSUSE 11.4, it is possible to build a powerful, capable server for Small & Medium Enterprise that requires minimal system administration to look after it. The system has been in operation for over a year now in various places and it works, although there is room for improvement.

The talk by Stephan ‘Coolo’ Kulow later that day was also well attended. He discussed the release schedule NG and seems to have picked up a certain feline theme, with happy, angry and scary kittens showing he’s serious about this. The content reinforced the cute kitty message: the release team has doubled, staging projects will give an extra workout to packages, maintainers get chased more by the team and more tests are applied. Build power has been a bit of an issue lately but there have already been changes and more will be done to resolve this limitation, both by making the system smarter and trowing more hardware at the problem. Feedback wasn’t supposed to be given during the talk but during one of the BoF’s being organized later today and tomorrow. 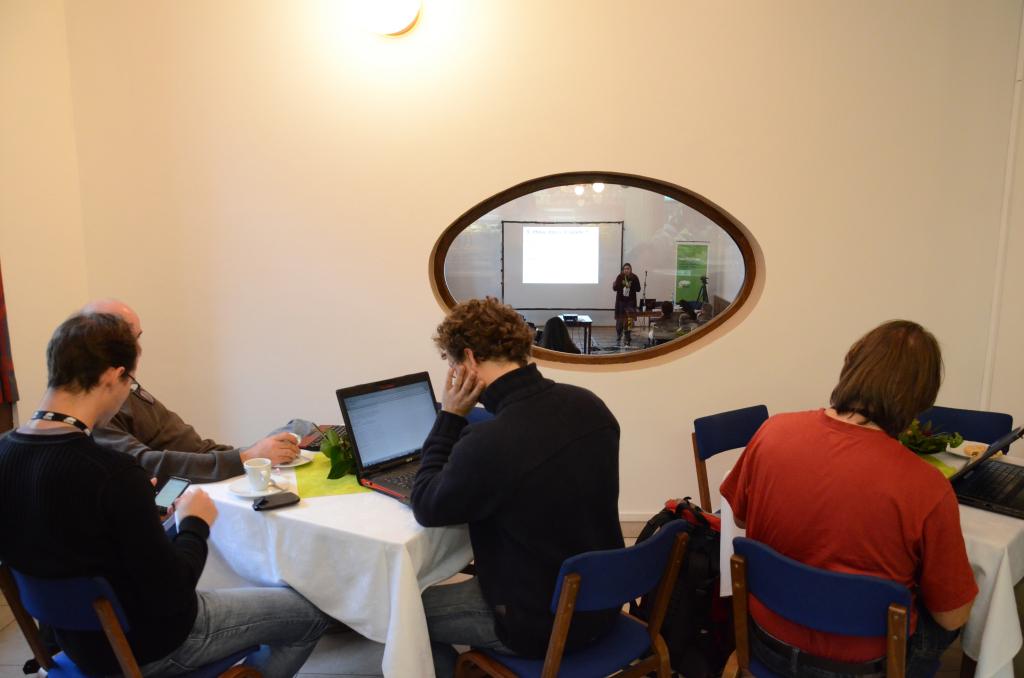 Like Coolo’s and Joe’s talk, other sessions were well attended and often the audience interacts extensively with the presenter and each other. That liveliness is reflected in the traditional ‘hallway track’, where lots of small one-on-one or few-on-few technical chats and discussions take place. People are even sitting on stairs and other less comfortable places, just to join in on discussions they want to provide input on.

And, like the last few days, we have people watching the live streams available on Bambuser and through IRC, some of these interact with the sessions on the spot. 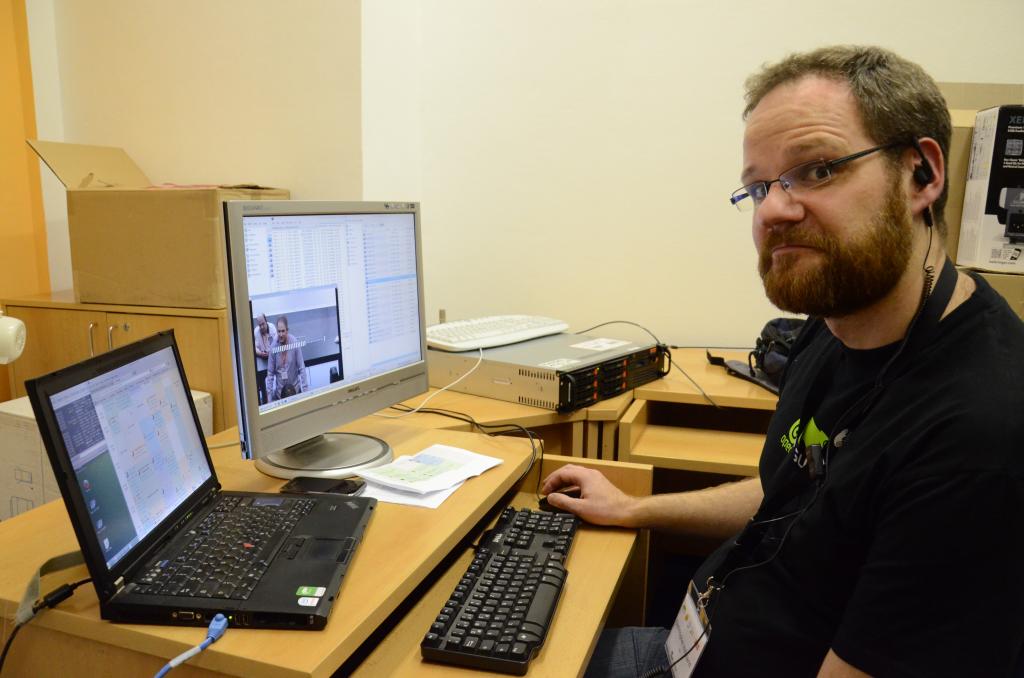 CWH all alone with the video’s[/caption]