Here is our report of the conference.

It was an incredibly well organized event with a busy schedule. It was our first summit (we try that different openSUSE mentors/org admins go every year) and we enjoyed it a lot and found it really useful. Apart from attending many sessions about open source, mentoring and GSoC, we had the opportunity to meet and have interesting conversations with other org admins and mentors, as well as with the Google open source team and other Googlers. In total 314 mentors and org admins from 42 countries attended the events. This was a great chance to collect chocolate from all around the world for the chocolate bar table, which has already become a tradition at the summit. 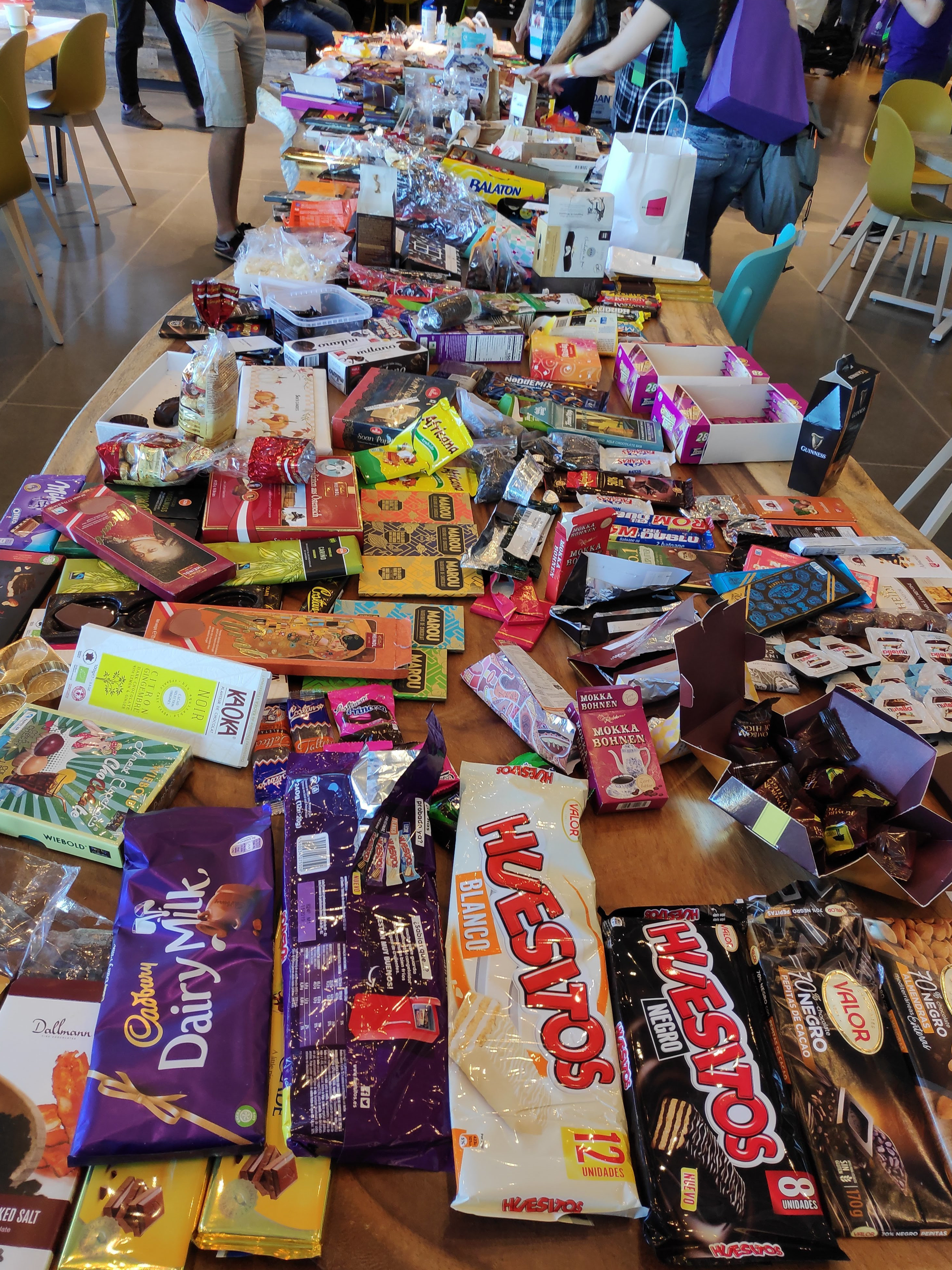 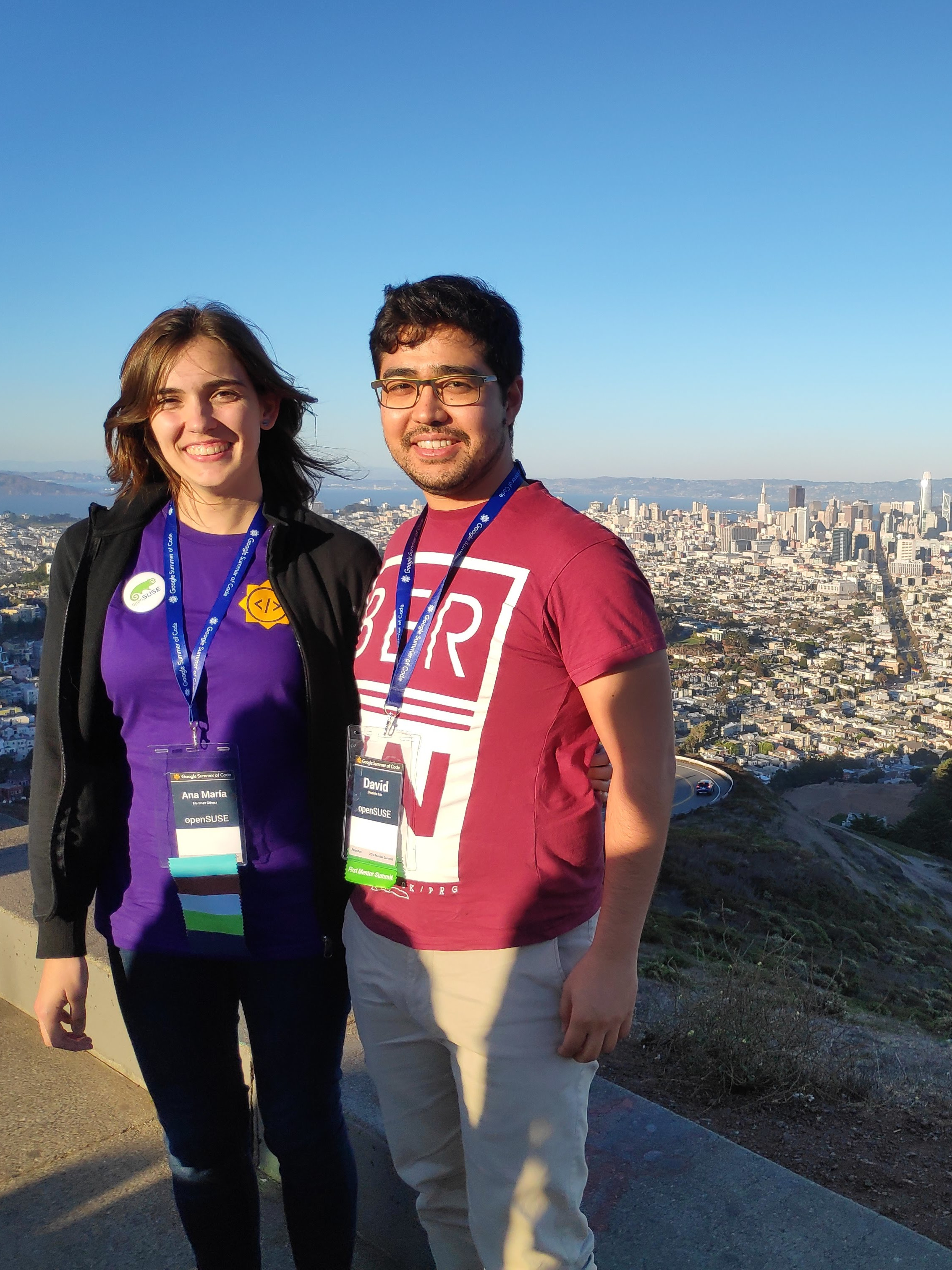 The summit follows the unconference format, which means that the sessions are decided and organized by the attendees. Those are the most outstanding sessions from the ones David and I attended.

There were about 2 hours reserved for 3 minutes lightning talks, in which around 50 different organization presented their students’ work. The only rule was that the part about the organization itself couldn’t be longer than 1 minute (ideally 30 seconds). We liked the original idea of clapping when the 3 minutes were over to avoid that the speaker continue speaking - we should steal it for the Lightningbeers in the next openSUSE conference

There were a lot of great talks about successful histories. I especially liked the ones where the students themselves presented their work in a video. I gave a talk focused on the feedback we gave to all our students, including rejected and unsubmitted proposals, and how we try to bring those students in our community and encourage them to keep contributing. I was not sure if the talk was appropriated, taking into account that the rest of the talks were about the students’ projects. But many people come to me after the talk to say they liked it a lot and got some ideas for next year, so it seems it was.

You can find the slides of all the given lightning talks (including mines) in this Google Drive folder.

Google is considering starting a new mentoring program: Google Season of Docs, the “GSoC for Documentation”. It was discussed whether mentoring orgs would be interested in a program of this kind and Google asked for feedback on the idea.

Apart from the fact that the program would be focused on documentation and not on code, there are other important differences. The participants would be experience technical writers (>1 year experience) and not students. As it is expected that the participants already have a full time job, the commitment would be less (~10 hours a week). Because of the same reason, the technical writers wouldn’t receive any stipend, as the students do. According to the Google team, it would be the experience they would gain though GSoD and not the money which would motivate them to participate. This was the most unclear and longest discussed part.

Recruiting, motivating and retaining mentors to your org

I found this a very appealing session, as the number of mentors in openSUSE has decreased this year to the point that we considered not to participate in GSoC due to the lack of mentors/projects. (Maybe someone reading this wants to get involved next year? - Just write me an email, comment in this blog post or check openSUSE mentoring page!)

The session was driven by Martin from Jenkins, and it was a enriching conversation between different orgs, which presented their problems, solutions and asked questions.It was curious how similar the difficulties of openSUSE and Fedora are (although not surprisingly because of the similarities of the two projects). Both communities are big and diverse, but they do not manage to get a lot of mentors involved in GSoC. Some people gave us some ideas, such as introducing non-technical mentors and having at least 2 mentors per project, but I still don’t have the feeling we found the magic solution.

Aleksandr Dobkin, from Google, gave a talk about the Patch Reward Program, which rewards proactive security improvements in several open source projects like Chromium and Angular. Rewards for qualifying submissions range from from 500$ to 20000$, depending on the complexity and impact of the patch. In the future, they want to expand the list of in-scope projects and define specifics tasks and bounties for them.

The Googlers Cat and Josh led this session, in which we did some brainstorming and listen to other organizations’ experiences. David found interesting that most of the attendees agreed that responsibilities need to be given to the students in order to keep them motivated and engaged with the project.

This session was supposed to be hold by the Googler Hilary Richardson, but she arrived late and it ended being a shared session with the Software Freedom Conservancy. It was an introduction to licenses, but although I had expected it to be more advance, there was some topics (some of which came up thanks to audience questions) which I didn’t know about and which I found interesting. For example, that you shouldn’t use the WTFPL (Do What the Fuck You Want To Public License) as it doesn’t include no-warranty disclaimer.

There was a meet-up of GSoC Spanish mentors and as both David and I are from Spain, we couldn’t miss it. We presented our projects, spoke about things we are doing to spread open source in Spain, such as talks at universities, and discussed what else could be done. We set a mailing list up to keep sharing ideas, material, etc.

Google open source team organized a session where the mentors and org admin could give them feedback about things that could be improved. I suggested something that openSUSE Asian community suggested to me in the last openSUSE.Asia: creating a poster which summarize the reasons to become a GSoC mentor and that should ideally include some visual reinforcement (like an infographic). It should catch people attention so that non-native speakers get interested enough to read the extensive documentation. (BTW, there are two videos from Google in that direction: Organizations Apply and Being a Great Google Summer of Code Mentor). I also suggested that it is clarified in the GSoC documentation that mentors and org admins are volunteers, as we had cases were students were unpolite or impatient and I think it was because they don’t know the conditions in which the mentors are helping them.

Beyond GSoC: how can Google help open source?

Google wanted to know what else they can do for open source. Most of the requests were related to founding and cloud credits. I used the opportunity to ask for a plain text option in the Gmail Android client which allows me to write to this mailing list with my phone (I know there are other clients…) and to mention the poster again when other people requested help from Google to recruit mentors.

This session was about how to improve the relationships between mentors and mentees, potentiating engagement after GSoC. Most of the attendees were org admins and they gave us some tips to help mentees to get involved in the community and also to improve the communication with his mentor. Some of the concrete suggestions were:

It was a really cool session by CHAOSS and Google about measuring all data we can and how to turn the numbers into something useful. For instance, it was interesting the discussion about how to measure the open source culture in a project: how many people say thank you, time to answer, PRs and issues closed, etc. I also liked some of the original examples presented by Felipe Hoffa (Developer Advocate at Google) such as using number of page visits vs StackOverflow questions. I recommend to check the fhoffa/analyzing_github repository.

Post-mortem: why a student fail? Hear from an student and org admin

Emmanuel from Public Lab told us about his experience when he was a GSoC student and why he succeeded the first year and why not in the second year. The difference was that he had a good guidance: his mentor was very accessible and close to him. The second time, the communication was bad: he didn’t receive any warning about doing something wrong and his mentor wasn’t there for him when he needs him. After all, he ended being a successful GSoC mentor.

It was a conversation trying to answer questions like: Why and how fail a student? How do you protect the future reputation of the student? What to do when the problem is the mentor?

We spoke about problems with really difficult solution and it was inspiring to hear other people approaches and ideas. Something that I found useful for us was the fact that some orgs are enforcing having 3 mentors per project. I think it is a good recommendation as it can save a lot of troubles from the admins perspective, it is good for the student and more fun for the mentors. However, I think we should enforce 2 mentors, but not 3. If the mentors think it is doable with 2 mentors, we should trust them. It would anyway be difficult to get 3 mentors for some of the project. Another great idea is that, in case the mentors disappear by any reason and you don’t know where to get more mentors from, write the GSoC mailing list. There are a lot of people working in diverse projects and someone may be able to help.

Quality of the software, when should we release?

This session was held by people from MuseScore, who wanted to discuss when a product is good enough to release. One of procedures that David founded interesting two approaches mentioned to release:

In this session, conducted by Valorie from KDE, we discussed how to identify a burnout in others and in ourselves and what to do when it happens (in general and in the GSoC context). Burnout is severe and we need to help our colleagues/mentors if we realise of it (signs: stressed, angry, grumpy, territorial, drowsy) and to step out when it happens to us (if it is important someone else will do it).

Suggestions for next year

All in all, those are my suggestions for next GSoC (they come from diverse places: the sessions, conversations with other people, etc.), in case openSUSE participates again (I hope so

Hope you have enjoyed reading the report. Remember that if you want to mentor next year in GSoC, you are more than welcome! Just write me an email, comment in this blog post or check openSUSE mentoring page.

My name is Ana and I am mentor and organization admin for openSUSE at GSoC, openSUSE Board member, Open Build Service Frontend Engineer at SUSE and open source contributor in projects inside and outside openSUSE.

This blog post is authored by Ana María Martínez Gómez and David Kang and is licensed under a Creative Commons Attribution 4.0 International License. This blog post original version can be found at //anamaria.martinezgomez.name/2018/10/27/gsoc-mentor-summit.html.