Yesterday, openSUSE 11.4 saw the light of day. This release introduced some awesome new features and this was noticed by Linux users on social media and the press around the world. Of course we’ve got a huge spike in visits but also the number of downloads has been enormous, almost twice as much as for the openSUSE 11.3 release! 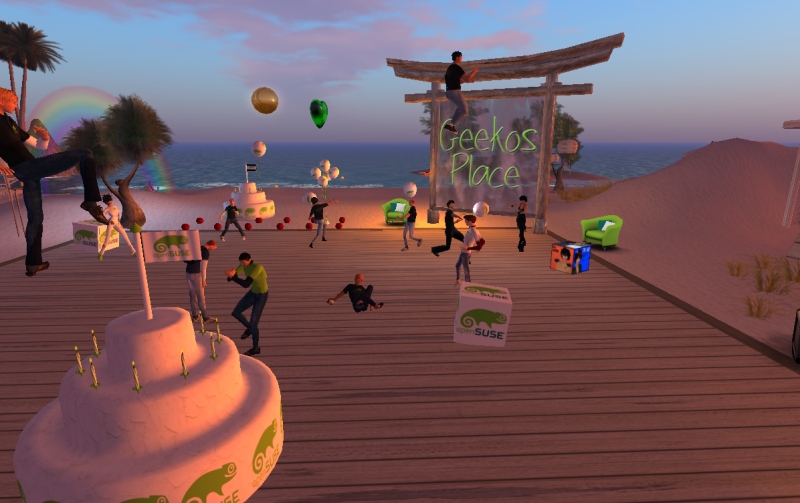 While openSUSE has been released less than 36 hours ago, a large number of reviews and articles has already appeared and many journalists and writers have commented on the new features. Over at linuxplanet.com Sean Michael Kerner talks about tumbleweed and some other cool stuff in 11.4, quoting Novell’s openSUSE community manager Jos Poortvliet. ZDnet’s J.A. Watson installs openSUSE 11.4 on his desktop and netbook and concludes:

All in all, this is an excellent release, and I am very impressed with it. Whether you're new to Linux or an experienced user, it is definitely worth a try.

At Eye on Linux Jim Linch says about openSUSE 11.4:

It’s arguably one of the best desktop distros available, and I expect it to remain among the top choices for a long time.

Jay Lyman, senior analyst for enterprise software at The 451 Group, was quoted by V3.co.uk on openSUSE 11.4 saying:

It's not only an option for early adopters, and we see a preference for these kinds of distributions in cloud computing

The announcement on Slashdot attracted the usual comments and so did digg. On Twitter and identi.ca openSUSE was mentioned many times and quite a few tweeters found the twibbon for openSUSE. Last but not least, the Facebook page of openSUSE got quite some attention! For all these media: if you’re not a fan, follower or friend, you can become one!

Find links to more reviews, articles and discussions on our In the Press page. Feel free to add articles you have found.

We have a continuous virtual party going on on Second Life, you can find pictures here. Even if the virtual release party is (almost) over by now, you can still visit the openSUSE area in Second Life!

For those preferring Real Life over Second Life, there will be Launch Parties around the world and it’s certainly not too late to organize your own!

But the above is all talk (and party). What counts are the numbers - and they are big. To just talk about the number of downloads via software.opensuse.org we’ve almost doubled the numbers of downloads in the first 24 hours compared to our previous 11.3 release! Well over 90.000 downloads from our website with another 12 thousand via Bittorrent in one day is quite impressive.

Not perfectly accurate, but…

Since each mirror site uses different ways of measuring, we cannot give an 100% reliable number of total downloads of openSUSE 11.4 but we can point out some numbers and give examples from our more than 80 mirrors. The Hungary mirror at Integrity.hu reported 220 GB distributed using http and additionally 400 GB via torrents. The American mirror at temple.edu had 460 GB on Thursday. The Swiss switch.ch distributed 1329 GB of data and the German mirrors from rwth-aachen distributed at peak time 5 gbit/sec and additionally 60 MB/sec of torrent data.

SUSE Studio offers another great way of getting a openSUSE 11.4 image - and well over 1000 people have already used this.

A total of 90844 requests for ISOs were reached via our download redirector at download.opensuse.org during the first 24 hours, a nice bump compared to 49599 for openSUSE 11.3! Note that we can not count who accessed a mirror directly instead of using the redirector on download.opensuse.org, so there are more downloads than that. Moreover, we have been emphasizing the possibility of upgrading openSUSE 11.3 over the web instead of by downloading an ISO and these are not tracked either.

However, you’ll be able to find openSUSE 11.4 statistics soon on the Statistics page. There we track how many unique IP addresses regularly update from our servers - a reasonably reliable way of knowing how many users we have. Of course those on a NAT or internal deployments as well as those who don’t upgrade via our servers are not counted and those with a dynamic IP might be counted a few times so take the numbers with a grain of salt as well.

These are the number of downloads split over the different media:

Our main distribution download page usually gets 17000 visits a day, on the launch day we had 63000.

Torrents worked really well for this release thanks to the many seeders, several folks reported that they could download torrents with the full capacity of their connection. The largest number of seeders was for the x86-64 DVD with 1076 followed by 959 for the i586 DVD. The tracker counted 12596 complete downloads via bittorrent during the first 24 hours, awesome!

The openSUSE launch on Thursday was possible thanks to a world wide infrastructure of ftp mirrors that coordinated the release with us. We’d like to thank all of them. Moreover, we’d like to thank the sysadmin team for the hard work they did to make the changes to the websites so users could download their brand new openSUSE 11.4! We’d also like to thank the marketing team and anyone who helped for their awesome work (check out the Product Highlights if you haven’t yet!) and of course all many contributors of openSUSE who helped to make this release possible! Finally, a shout to our sponsors Novell, AMD, IP Exchange and B1!