[/caption] A bit over one week ago, we released openSUSE 11.4 introducing many exciting new features. The result was, as we wrote on Friday: a big splash. The 100.000 downloads in the first 24 hours and large numbers of blogs, articles and reviews all over the world were certainly impressive! So today we have a look at how the stats looked after one week. Did we keep the momentum going?

6 days after our previous report, downloads on bittorrent moved to well over 36.000 downloads from the 12.000 in the first 24 hours. Still over 900 people are seeding. Meanwhile, the total number of downloads on the download page has exceeded the 300.000 downloads now. Breaking the numbers down a little, we can see what images you are choosing. With over 113.000 downloads, the i586 DVD iso is the most popular, followed by 83.000 downloads for the 64 bit DVD. The live CD’s are going fast as well, with over 37.000 for the KDE (32 & 64 bit) and 31.000 for the GNOME one. Quite a few users are even opting for the networked installation CDs, with about 16.000 downloads as well.

After announcing they had openSUSE 11.4 support from day 1, the SUSE studio team let us know last week that they had 1000 appliances build with openSUSE 11.4 in 24 hours. Well, since then, thousands more have been made! On the release day, traffic to the SUSE Studio website spiked by 62%. Right now, SUSE Studio image building still takes significantly longer than usual due to the continued increase in traffic… They also let us know that it is now possible to automatically update your current appliance to openSUSE 11.4 if you want. 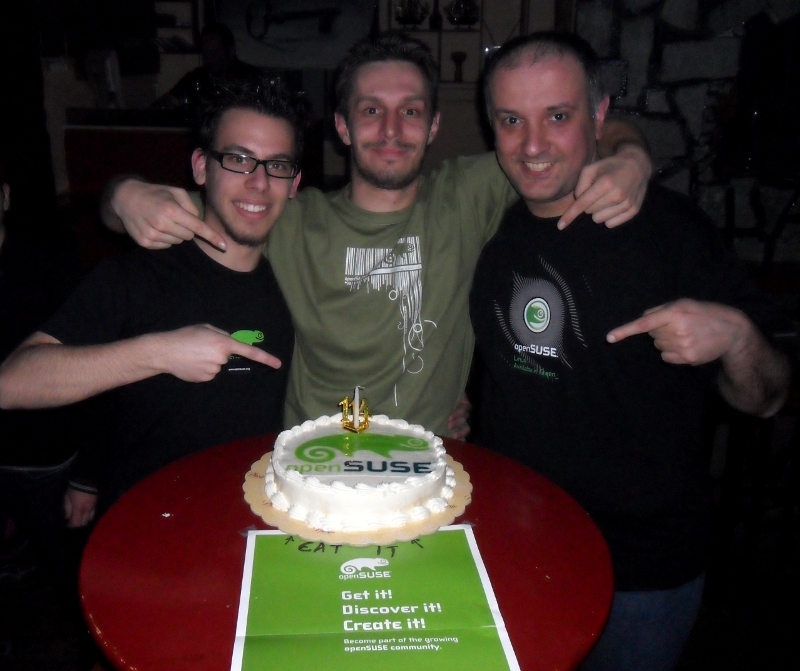 Right from the launch date on, there were launch parties all around the world. On planet openSUSE, the first reports are showing up and the pizza-fuelled Dutch release party had a report on connect.opensuse.org!

openSUSE Ambassadors in Greece brought their growing community together for a release party complete with cake. Yum! 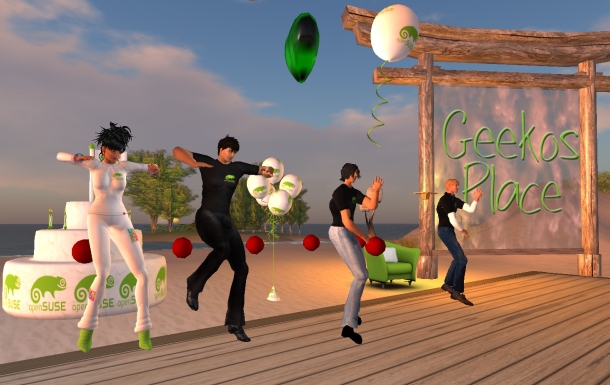 Among the many creative approaches to launch celebrations perhaps the Geekiest was the virtual launch party on Second Life. A DJ, chat, dancing and balloons allowed the online community to celebrate in style at Geeko’s Place.

There are many more reviews now on the web. We have not spend much time updating our in-the-press page as there is just too much. Just in Spain, for example, 10 major sites published reviews and notices - that is not including blogs and many smaller sites…

We do want to point to one particular review, the one by The Linux Action show. Both gentlemen doing this are usually not huge openSUSE fans so we greatly appreciate their glowing review of 11.4! And, gents, count on us taking care of the thing you were missing: innovation and fancy stuff! There are several great initiatives upcoming as we reported in this article about 2010 and surely, more will come.

Of course Novell supported our release with a press announcement, mentioning some of our major new features. Chairman and CEO of Attachmate, Jeff Hawn, conveyed congratulations on the release of openSUSE 11.4 on behalf of his company. 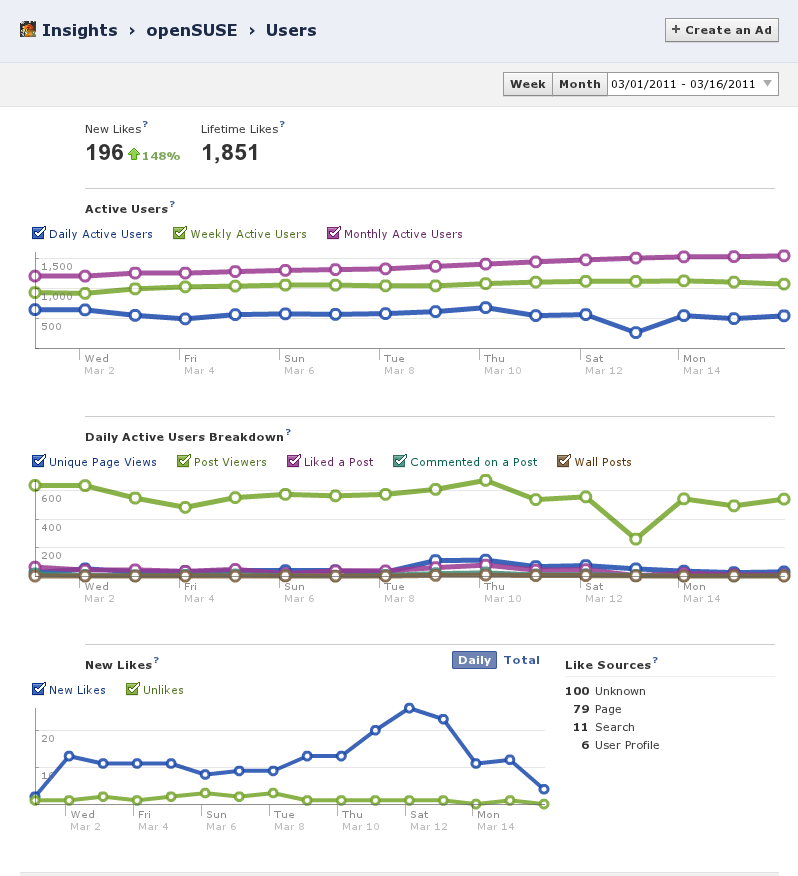 Our Social Media guru Chuck ‘pup’ Payne reports some fantastic participation on our various social networking channels. The top five countries participating in our social pages were the USA, Indonesia (who have created their own page!), Germany, India, and Italy.

As a ‘last moment idea’, Chuck posted on the openSUSE page and group that users might like to change their pix to the Geeko character that Carlos had had created. A fun way to celebrate and promote the release. This was very successful, with 20% of users changing their profile pictures to our geeky, suit-wearing lizard! openSUSE Facebook Page 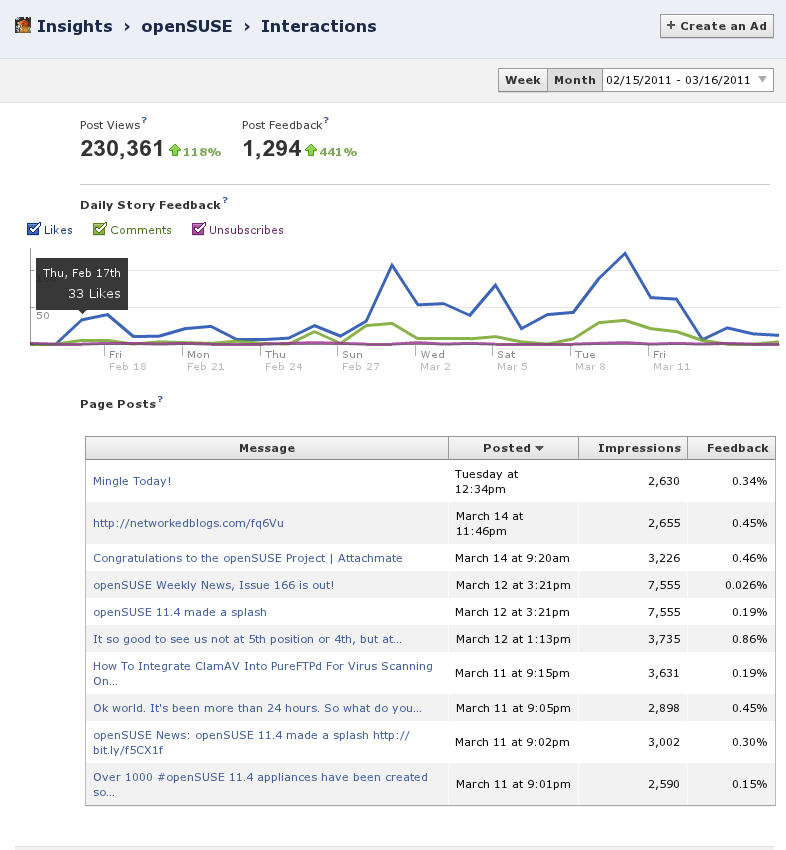 The stats for the official openSUSE Facebook Page were up 148%.

Weekly and Monthly Active User are on the rise. There was a bit of dip on March 12 (Saturday) after the release - must have been all those machines busy downloading and installing! Page Likes are up 122% with postfeed back up 238%. The highest was the day of the release. Post views went up 118% with post feed back being up 441%.

Twitter Chuck set up a feed so that posts would be sent to Twitter. It’s hard to get exact statistics for Twitter, but over on the day we had a lot of #openSUSE tweets flying around. 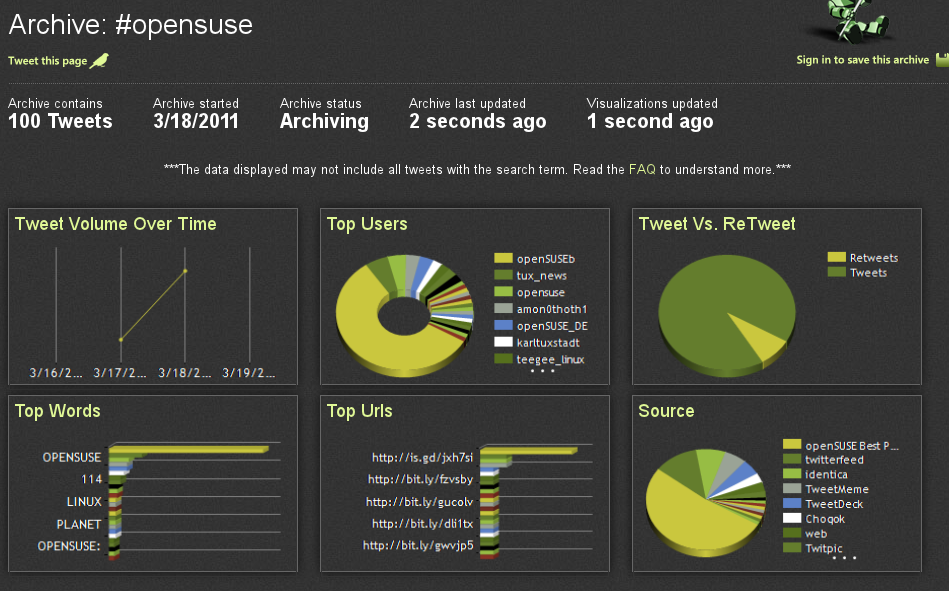 We started mainly twitting and re-tweeting or news. Chuck sent direct tweets to Linux Magazine, Linux Pro Magazine, Linux Journal, which helped because they return retweeted and then created they own tweets with links to they websites. We really appreciated the support from the media!

Social and more traditional media was buzzing with openSUSE activity since the release. We had hundreds of thousands of users downloading the latest openSUSE. We had parties around the world (and more coming up). OpenSUSE 11.4 got a lot of attention!

Thanks to Helen & Jos for writing!