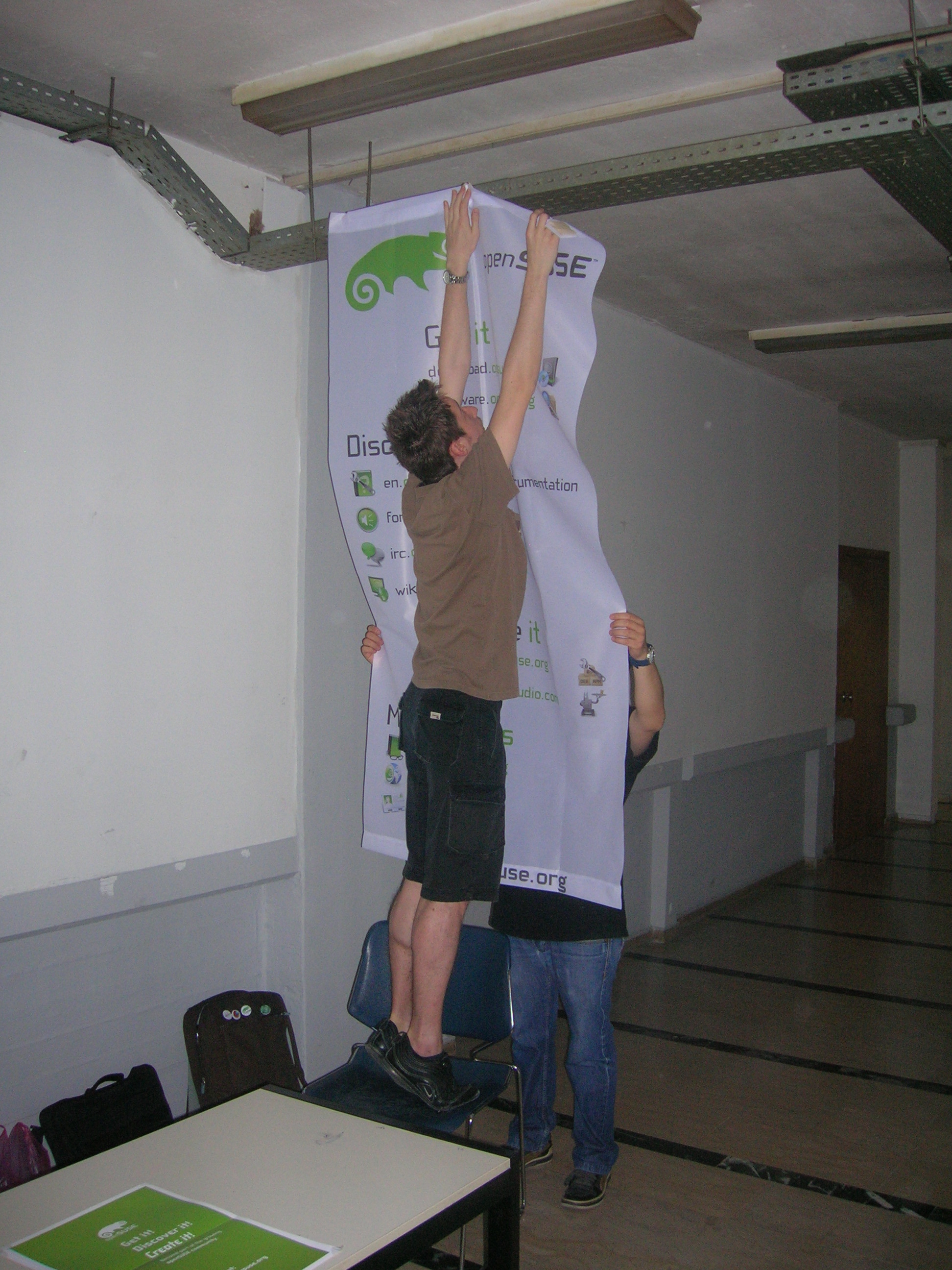 Over the last few months the openSUSE ambassadors have continued to visit conferences around the world. Since our previous report beginning of May, several big events have happened and we’ll treat you on a report on some of those.

Let’s start with a few quick links to reports which are already online and probably read by some of you. There is for example the huge splash Greece ambassadors made at Fosscomm 2011 which took place on May 7 and 8 in Greece. With 8 presentations as well as a similar number of lightning talks and a workshop on OBS openSUSE ruled the conference. The team co-hosted the GNOME community in their booth as well as the Enlightenment project and a few others, showing the open and collaborative spirit of openSUSE! Last but not least, they organized a late 11.4 release party which ended up having Red Hat, Ubuntu, Slackware, FreeBSD and many other visitors joining the party!

The Greek team also organized a summer camp from which you can see pictures in their facebook group. Rest assured we’ll make them work harder after they so clearly spend a lot of time drinking and hanging in the sun… 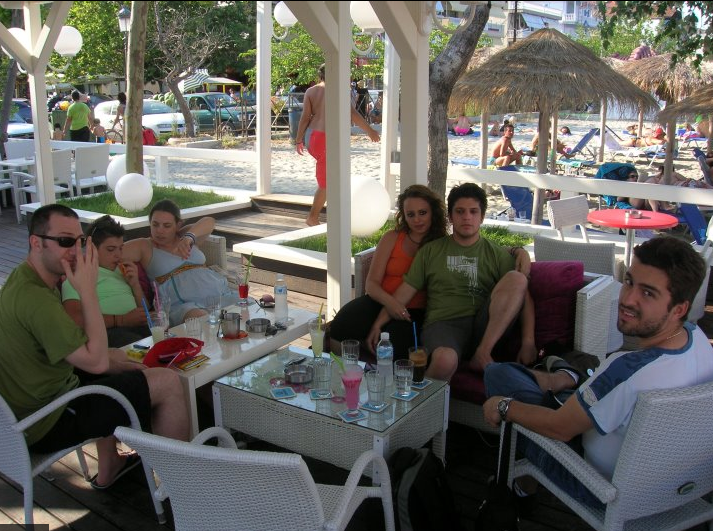 Most interestingly, the Greek team went to the Xariseto.gr bazaar. In Thanasis’ words: Xariseto is a festival where people meet and donate their personal belongings which they don’t use any more. So as a Linux and openSUSE community we thought that participating in these kind of festivals is really interesting.

The result was people from 7 to 70 years old learning about openSUSE… The team also went to the EL/LAK conference in Thessaloniki.

And as was quite visible on planet openSUSE, we had a presence at LinuxTag in Berlin.

While not all openSUSE ambassadors have the time to send in event reports, we are always happy to read the ones we get. Below a few of them.

At the end of April, Ricardo Varas Santana attended the FLISoL event in Chile, which has about 1000 visitors. He gave a talk titled “openSUSE, Linux in Green and for all”, talking about what openSUSE is, how to get involved as well as what technologies we have. About 400 DVD’s were handed out as well!

Orv Beach participated in the Southwest Computer Conference where he presented openSUSE to an eager crowd. He gave out Tuxes and Geeko’s as well as 160 DVD’s and flyers to the visitors, mostly members from Computer Clubs around the USA. 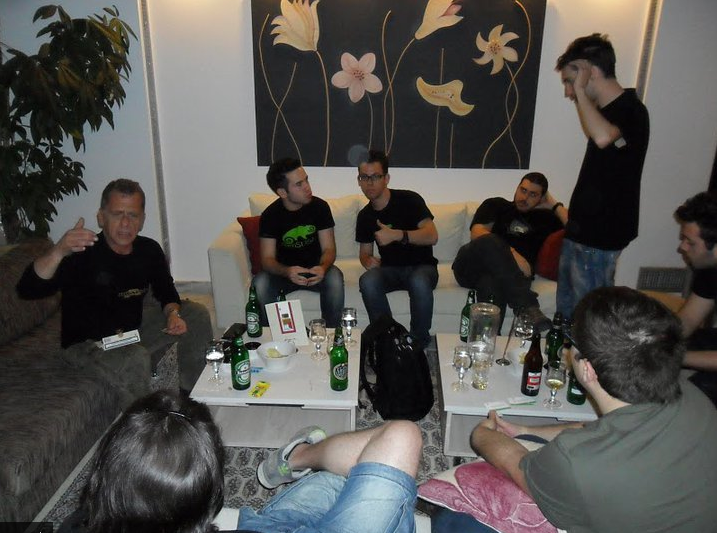 Max “Sakana” from Taiwan wrote us three reports in one. First of all, he as well as several other openSUSE ambassadors was at GNOME.Asia 2011, where the GNOME 3 LiveDVD’s (based on openSUSE) were handed out. Pictures can be found in the openSUSE flickr pool. But Max and the Taiwan team did more. Max teaches students openSUSE at the Ming Chi University of Technology, where openSUSE is quite popular. Moreover, there were two seminars at two different colleges, the Ling Tung University and the National Formosa University about SUSE Studio and Nagios with openSUSE. openSUSE DVD’s were handed out and according to Max, openSUSE did very well!

Stuart Tanner went to the RedRat Computer Market in Sheffield. He was the only linux person in the room and brought a large 42” FullHD TV to demo it. He tried to lure amateur-photographers into Free Software, aweing them with ShowFoto, DigiKam and similar tools

Your humble writer has also done his small share the last months, showing up at a computer event in the Netherlands. A team of 4 manned a booth, held 2 presentations, handed out a few hundred DVD’s as well as posters and in general showed openSUSE rocks also in NL! 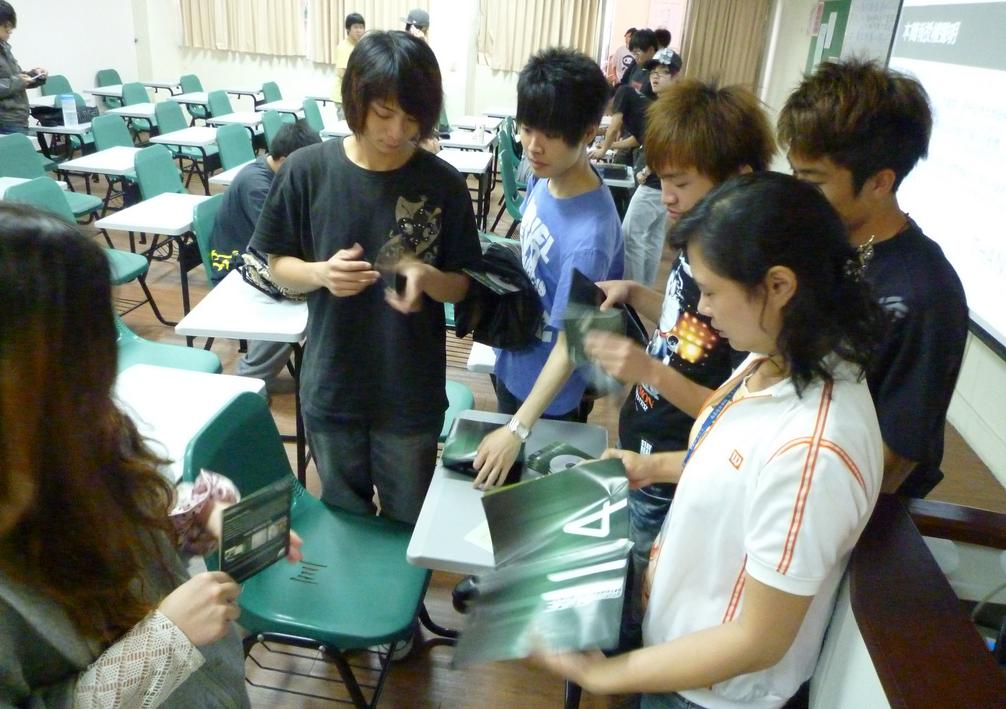 First of all, the above are just a few of the events we know about. For example, in Brazil, openSUSE was present on FISL, the Porto Alegre event with over 8000 visitors. We’re eagerly awaiting the event report! More events happened, more will come. But this is not the only thing openSUSE ambassadors do!

Take the incredible Baltasar Ortega who has been covering openSUSE and KDE technology in his blog for years! If you can read Spanish, be sure to bookmark his blog. He will point you to gems like the Studio Imagewriter or share wonderful tutorials like these. Max wrote an article about “openSUSE and Hadoop” the May edition of the Hongkong Chinese/Taiwanese Linux Pilot Magazine.

And did you notice our Greek team translates the awesome Weekly News in Greece?

The work these ambassadors do for openSUSE is incredibly valuable and should not be under estimated. Christos Bountalis, working on fillup-ng in openSUSE, joined after meeting the Greek openSUSE ambassadors at an event, remarking in his interview, when asked why he joined openSUSE: I have found many nice and interesting people And indeed. People are what makes the difference between a good and a great Free Software project. And our Ambassadors are often the first people outsiders see!

So we’d like to thank our ambassadors for their awesome work, and invite anyone to join their ranks!

You can also help in other ways. For example, if you are an openSUSE developer or follow development closely, add a glimpse of what is coming to the wiki. Or if you know a bit about openSUSE, add and improve our talking points! We also can always use artwork, help with writing and many other things. Feel free to contact the openSUSE marketing team on opensuse-marketing@opensuse.org and offer to help out!